Denis with his beloved lab, Cara, who he was bringing for her hydrotherapy session in Cork when the accident happened. ‘I miss her a lot,’ he says.

The friendly face at Bantry Airfield, and familar to many from walking around the town with his beloved Cara, Denis Connolly suffered a life-changing crash last summer, which has turned his world upside down

That’s how Bantry man Denis Connolly described the life-changing car accident last June which resulted in him losing the use of his legs and being paralysed from his upper chest down, with limited use of his shoulders and hands.

‘But I’m still myself mentally, and I can still laugh, joke and have the chat,’ said a very positive Denis, speaking from the National Rehabilitation Unit in Dun Laoghaire where he has been since September 15th.

Describing the day of the crash, Denis said: ‘I got up that morning, a Thursday, and went to work in Rowa Pharmaceuticals as usual. I’ve worked there for 25 years and was hoping to do another seven years. It was my short day at work.

‘Once a month I take Cara, my seven-year-old golden labrador to the Canine Clinic in Cork for hydrotherapy for her hip dysplasia, and that afternoon we set off for her appointment.

‘We were driving up the back roads, I had plenty of time, there was no rush.’

Denis doesn’t remember what happened next, and presumes he suffered a blackout. ‘I know I was driving one minute, and the next I was being pulled out of the car. It was so, so bizarre. I never felt any impact, or heard a thing.’ 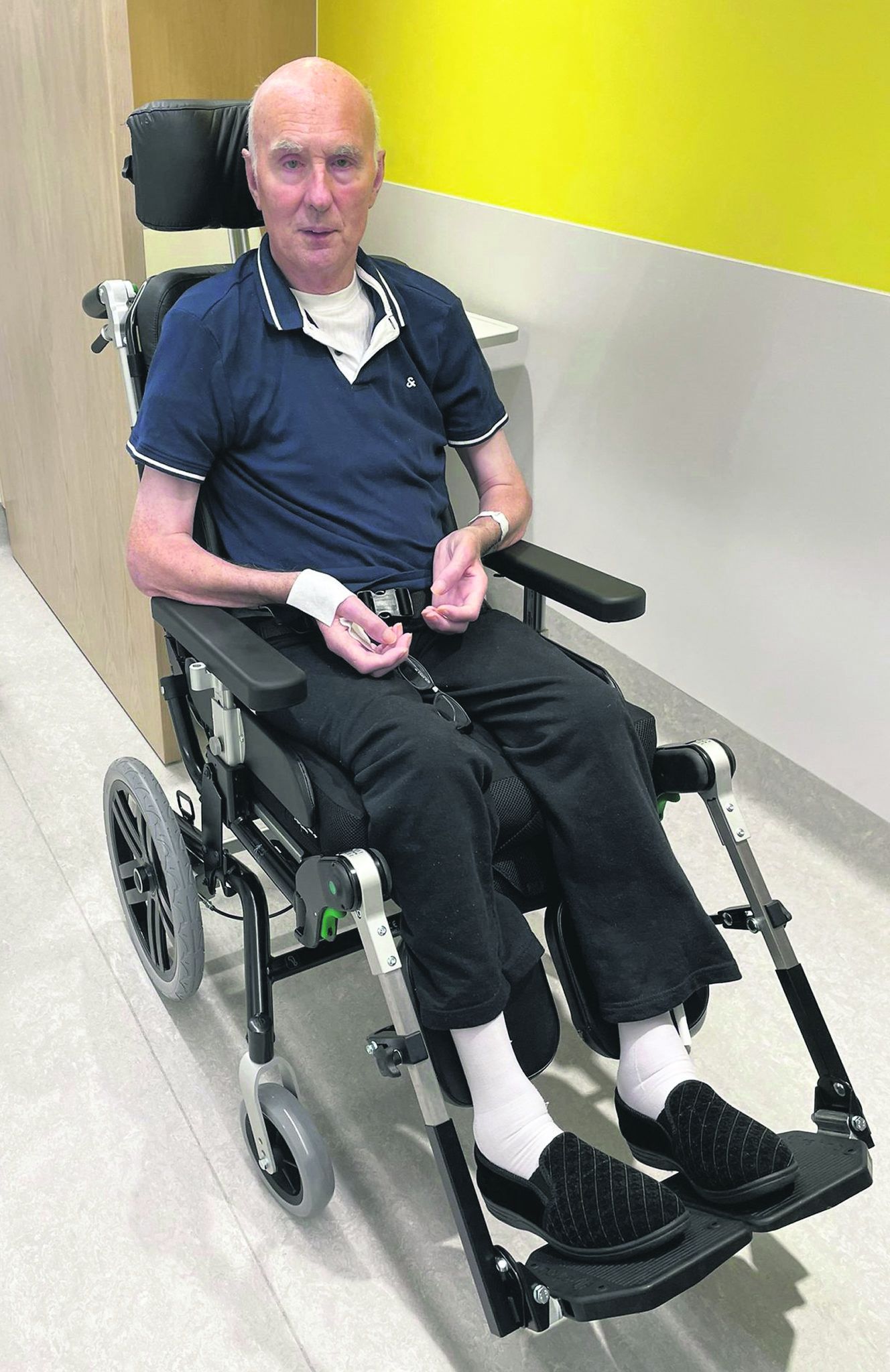 Denis in the National Rehab Centre in Dun Laoghaire.

He was rushed to CUH, and from there was driven through the night to the Mater Hospital in Dublin where he underwent complex spinal surgery and was transferred back to CUH a week later.

Denis said he knew the prognosis was bad from the start. ‘I had no feeling in my legs, I knew it wasn’t good. I accepted it straight away, but it was hard.’

He says he has good days and bad days. ‘I try to have more good days, and I can only do my best to look forward.’

Denis said his wife Mary has been his ‘rock’ since his accident.

‘She comes up to see me every Wednesday which requires her to get a 7am bus from Bantry, the train from Cork, then the Luas, and a taxi to me. Our son Shane has also been fantastic,’ he said.

He also said his employer, owner of Rowa, Brigitte Wagner-Halswick, has been a great support and is in constant contact with him.

He’s also missing Cara, and his two cats, very much.

‘Cara amazingly was uninjured in the crash. She did come to my 70th birthday, which I marked when I was in CUH, but I miss her an awful lot.’

Denis is extremely well known in aviation and photography circles, and there’s been an outpouring of support for him from these sectors nationwide, and abroad.

His focus now is on doing everything in his power to get back to West Cork, and he’s very grateful for everyone’s support through the GoFundMe. ‘I miss Rowa, and I miss the airfield. I just want to get home to Reenrour East,’ he said.

To donate see ‘Get Denis Home’ at GoFundMe.com or leave envelopes with The Fish Kitchen or Rowa in Bantry. 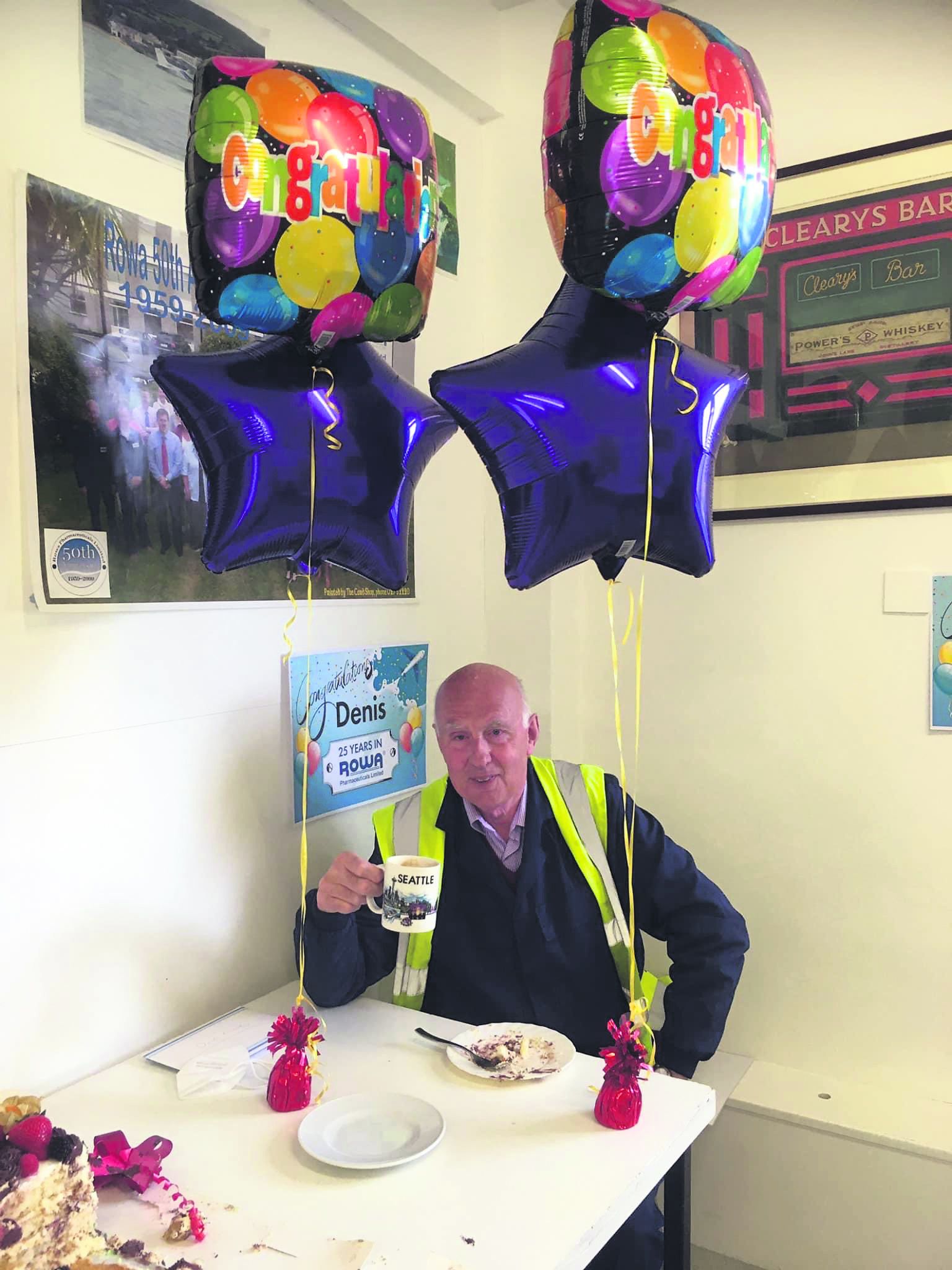 Community unites to get Bantry’s Denis back home

A MAJOR fundraising campaign has been launched to renovate the home of a hugely popular Bantry man after he suffered life changing injuries in a single-car crash.

Denis Connolly was left   paralysed from his upper chest down, with limited use of his shoulders and hands, after the crash last June. He’s currently undergoing treatment at the National Rehabilitation Centre in Dun Laoghaire, but wants nothing more than to get back to his beloved Bantry, his family and dog Cara, as soon as possible.

Denis has worked at Rowa Pharmaceuticals for the past 25 years, and is also an avid photographer and videographer who captured countless West Cork weddings throughout the ’80s and ’90s. The photos he shares online of his hometown have made him a leading ambassador for the area, and he’s also a huge aviation enthusiast, with strong connections to Bantry’s airstrip. All these communities have now united to raise €50,000 to adapt his home at Reenrour East, and to bring the 70-year-old home.

‘Denis has lived in his house for 37 years but unfortunately it’s not suitable for someone with the needs that he is now living with,’ said Liam O’Brien, of the
fundraising committee. ‘The house will require substantial structural renovations so we, his family and friends, have decided to start a GoFundMe page to raise funds to grant Denis’ wish to return to his family home. The family are working with the local authority to avail of the house adaptation grant. Even if this application is approved, it will cover only a small percentage of the overall cost to adapt the house for Denis’ needs. We are reaching out to Denis’ friends at home and abroad to help us raise the remainder of the funds to meet the substantial cost of renovating the house, purchase specialised equipment and provide ongoing care for his high needs.’

Joe Keane, head of operations at Rowa, said Denis had been an important part of the company for 25 years: ‘He’s a Rowa man through and through, who went above and beyond the call of duty over the years. The void he has left here is unbelievable. He was the man that was called on for everything and he was there for everyone, and now it’s our turn to help him.’

Denis said he was so grateful for all the support and was looking forward to getting back, firstly to Bantry General Hospital in the new year, and then back home.