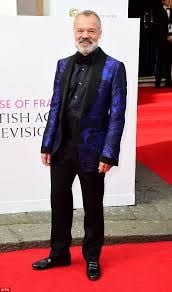 The bearded Bandon man, whose Friday night show has consistently topped the light entertainment ratings, was thrilled with his latest gong.

Graham actually presented the BAFTAs, as well as picking up an award for Best Comedy Entertainment Programme.

After winning, he tweeted: ‘And Bafta is over for another year. Amazing how winning cheers the evening up!’

But it wasn’t his award which had tongues wagging afterwards, or fingers tapping on Twitter, it was Graham’s ‘on-trend’ beard, which he has been sporting for some weeks now.

The Guardian newspaper described it as a ‘jaunty apprentice Santa, chic gnome’ look.

The question on everyone’s lips in West Cork is, will Graham keeps his beard on this summer when he returns home to host the annual Ahakista pub quiz, or when he appears at this year’s Bantry Literary Festival to promote his autobiography?

Meanwhile, it was reported this week that Graham earned €3m in fees last year, making him one of the Britain’s best-paid presenters.