Adrian O’Hara from Lismore, Co Waterford with his mum Phil, after he received a bravery cert for his work in the rescue of a crew from a fishing vessel in high winds and heavy swell off the coast of Bantry Bay

QUICK thinking heroes who averted potential tragedies in West Cork have been honoured for their bravery.

A Fermoy-born winch operator with Rescue 117 – who was involved in a dramatic rescue of seven fisherman off the Bantry coast earlier this year – said he was honoured, along with his crew, to receive a National Bravery Award at a ceremony in Farmleigh House last week.

Adrian O’Hara (48), who lives in Lismore, attended the ceremony with his mum Phil and told The Southern Star that it was made all the more special that she got to attend alongside him.

‘It was only when I saw the picture of us later that it sank in how fantastic it is. At the end of the day, it’s all about the people who support us in helping us do the job that we do,’ said Adrian, who also works alongside Skibbereen native and fellow winchman Neville Murphy.

‘The more I look at the photo of us the more I love it, and she was delighted to come up to Farmleigh House for the ceremony,’ he said.

Adrian along with his colleagues from Rescue 117, Sarah Courtney (winchman), Ronan Flanagan (pilot) and Aaron Hyland (pilot) were awarded certificates of bravery, while Sarah was also awarded a silver medal for their work on March 27th last involving the rescue of seven fishermen, whose trawler was in grave danger of sinking in bad conditions.

‘The ship was taking on water and when we got on the scene we had to airdrop a liferaft if they needed to get into it. We then decided to airlift the seven of them and it was fantastic to rescue them. It’s so unusual to rescue so many people off a boat alive and the success of the rescue was also down to the actions of the crew on board the fishing vessel. It could have been a lot worse.’ 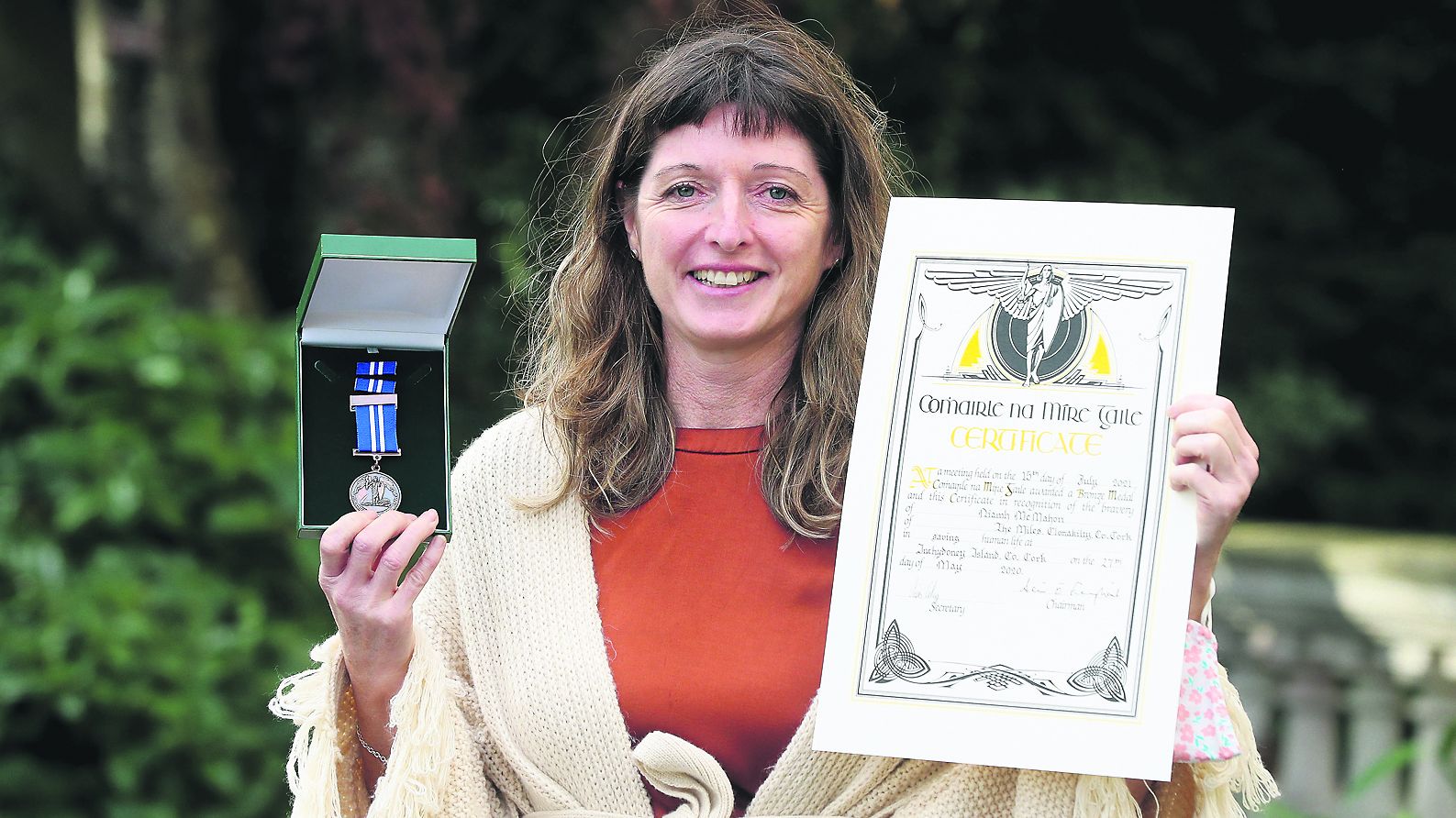 Niamh McMahon from Clonakilty with her bronze medal for bravery after a rescue on Inchydoney beach. (Photos: Maxwells)

Also at the same ceremony, Beth Darrer and Niamh McMahon from Clonakilty were awarded a bronze medal and a certificate of bravery for their dramatic rescue of four young men who got into difficulty off Inchydoney beach  on May 27th last year.

Beth had heard the shouts for help and urged people along the beach to raise the alarm, before grabbing a lifebuoy and wading out to one of the men who was being helped out of the water.

Niamh was paddling out to where Beth was and they then swam to the other men, while avoiding a strong rip tide. Niamh had managed to get one of them up onto her surfboard, while she had another clinging to her surfboard.

The brave duo then managed to get the fourth man and brought all of them back to the shore safely.

The pair, along with Lynn McCarthy, received Seiko Just in Time awards at last year’s Water Safety Ireland’s awards for their involvement in that rescue.