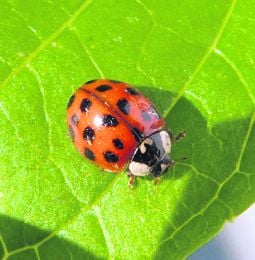 The Harlequin ladybird is bigger than native ladybirds

THE Cork Nature Network is asking the public of Cork City and County to help them find out how far the Harlequin Ladybird has spread.

The presence of the Harlequin ladybird is not good for native species. It can out-compete them in hunting food and they reproduce up to three times each year. Most native ladybirds reproduce once a year.

It has also been found from research undertaken in the UK that the Harlequin Ladybird can lead to reduced numbers of some ladybird species.

It was first introduced in the USA in 1916 as a bio-control agent in greenhouses. In the 1990s it was introduced into Europe.

To help Corkonians identify this particular species of ladybird, a workshop is being offered to the public on July 12th in Fota Wildlife Park, from 10am-3pm.

The aim of the ladybird workshop is to ask for help to record sightings of ladybirds so that the Cork Nature Network can find out where the Harlequin ladybird can be found in Cork. The workshop will cover topics such as ladybird ecology, where ladybirds can be found, what are the species of ladybird and how sightings can be recorded.

In the afternoon, there will be an opportunity to look for ladybirds. Places are limited and the event is free.

To reserve a place and find out more details please contact [email protected] or 0872282040 for further information.