Holly, with her husband Derek and little boy Andrew. The courageous young woman is doing everything in her power to battle her illness for them.

A Clonakilty nurse is driving a campaign to raise €50,000 for her friend who is part of a US breast cancer trial. If successful, it could see the drug being available here where it would give hope to other women battling the disease

A WEST Cork nurse has launched a fundraising campaign for her friend who has been accepted on a ground-breaking US cancer trial that’s her best chance of survival.

Clonakilty-based Olive O’Sullivan is driving the campaign to raise €50,000 for Holly Kennedy, who is battling aggressive breast cancer for the second time.

And if the trial is successful Olive says it could pave the way for other Irish women to access this revolutionary drug, and give hope where before there was little to none.

Dublin-based Holly was first diagnosed with triple negative breast cancer in 2016, aged just 32. She was feeding her first and only child, Andrew, when she noticed a lump.

She underwent 13 months of treatment including chemotherapy, surgery and radiotherapy and came out the other side a very different person.

Instead of returning to her work as a graphic designer for a global food company she launched an online magazine, happymagazine.ie, to provide non-medical cancer support. Cancer-free for two years, tragically the disease returned last summer and spread to her lungs, bones and liver, with a significant tumour near her heart.

Holly is one of only two women in the country with similar diagnoses and, with no available treatment here, was fortunate to be accepted on a potentially life-saving cancer trial in San Francisco.

Olive said: ‘Her oncologist agreed to let Holly accept this trial and sent her tissue samples to USA as there was nothing else left to try. CytoDyn Pharmaceutical invited Holly to USA for the trial, just as Covid hit. She managed to get cross border clearance with the American embassy as a mercy mission, at a time when the world was in shutdown and made the physically gruelling three-day trip there on June 16th.’

The young mum scored 90% for a good response to the drug which is being fast tracked for approval in the US.

‘In fact it was such a good response that CytoDyn pharmaceutical reached out to Holly the next day to say that they felt so invested in her they would find a way to get the drug, Leronlimab, to her. They also would find a way to get the blood samples taken in Ireland to be FedExed back to them – so, simply put, the drug would travel to her instead of her travelling to the drug. Initially she thought she would have to fly out to San Francisco for assessment every two months, get assessed, and collect the next eight weeks' supply for the duration of the year-long trial. This was fantastic news, given that the trip took so much out of Holly, both in terms of her health and finances.’

There are certain conditions attached to the year trial, including continuing chemo, seeking an oncologist who specialises in triple negative breast cancer in Europe and having genetic mutations tests, which each cost between €2,000 and €3,000 and the fundraiser has now shifted to cover these costs. 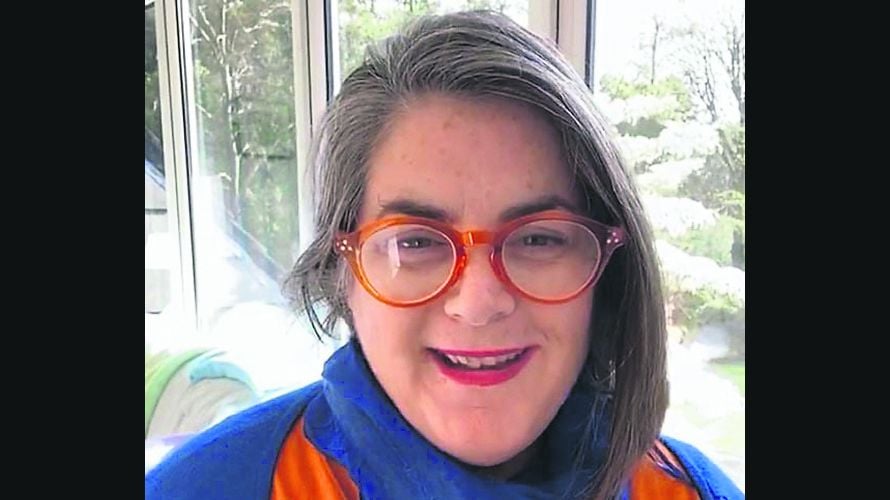 Clonakilty-based nurse Olive O'Sullivan who is spearheading the global fundraising campaign for her friend Holly.

Olive has used the hashtag #hollystrial throughout the campaign and Holly’s US doctors have told her she’s attracting lots of interest State-side. Just a few weeks after launching the fund, it’s already at around €30,000 with single donations of €1,000 and €2,000.

Holly has also produced a cancer journal for oncology patients which is selling for €20.

Olive, an experienced nurse/midwife runs BrowtiqueCork, an eyebrow microblading clinic where she restores eyebrows in women who lost them, mostly due to cancer chemotherapy.

She became pals with Holly after the Dubliner featured her business in the first edition of her magazine, which resulted in a major boost in clients.

‘As a mother myself, my mother’s heart was full of compassion for her. I see cancer clients every single day – 70% of my clients have cancer and then I had the time on my hands as my business closed temporarily in March and isn’t due to reopen until August due to Covid. I had to help her.

‘I feel if this trial is successful it may become available to all women in Ireland if the government approves it. Holly Kennedy will be the cornerstone of getting this drug to Ireland to help our triple negative breast cancer women and my patients.

‘Your donations will help a new mother fight for survival for her husband Derek, and her little boy Andrew who needs his mom.’