BY BRIAN MOORE THE community on the Sheep's Head turned out in force to begin 2015 healthily at the official opening of the Muintir Bhire Community Walkway. 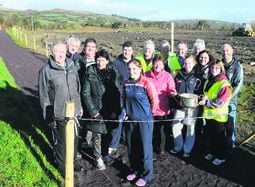 THE community on the Sheep’s Head turned out in force to begin 2015 healthily at the official opening of the Muintir Bháire Community Walkway.

Over 200 people gathered at the community hall in Durrus and then made their way to the new Muintir Bháire GAA grounds where Cork ladies’ football star Rhona Ni Bhuachalla cut the ribbon and declared the 600-metre walkway opened.

‘It’s a fantastic turnout here today. This is a facility we know the people off the Sheep’s Head will use and enjoy and it is just the beginning of what we have planned for the new grounds here in Durrus,’ Muintir Bháire GAA chairman Joe O’Driscoll said as the hundreds of walkers set off on the first official circuit of the new walkway.

The site, which cost €470,000 and will be home for the Muintir Bháire GAA’s new grounds, is located just outside the village of Durrus and set in some of the most scenic landscape at the gateway to the Sheep’s Head Peninsula.

‘This is a great start to the work that will be ongoing here at our new grounds. The plans include two new pitches, a clubhouse, ample off-road parking and an extended walkway, which, will run completely around the perimeter of the grounds. As it can be very dangerous to walk on the open roads these days, especially after dark, the new walkway will provide a secure place for the community to walk and get some exercise. You can stroll, walk or jog; it’s completely up to you,’ Joe O’Driscoll continued.

And it’s not only a facility for walkers. Dotted along the track there are eight exercise machines designed to add an extra dimension to any leisurely stroll.

‘The walkway and indeed the new exercise machines are designed to make our new grounds available to the wider community. We’ll have the pitches, which we know will be very popular, but we want to develop the amenity for everybody, not just those who play football,’ Muintir Bháire Óg chairman Darren Stock said.

As an added bonus to the official opening last Saturday, all those attending made donations to the Irish Heart Foundation as they set off on the inaugural circuit of the new track led by Rhona Ni Bhuachalla with the ladies’ All-Ireland football Brendan Martin Cup.

‘All of this and the future development of the new grounds is all down to the incredible generosity of all those who have volunteered, donated and worked so hard to make this amenity a credit to the people of the Sheep’s Head. We also want to thank Cork County Council, Biggs Oil Bantry and, particularly, Declan Daly of Concept Design for all their help and support,’ Joe O’Driscoll said.

‘We would also like to thank the hardworking committee members, fundraisers and the volunteers who worked on preparing the walkway,’ Joe O’Driscoll said.

Now open, the new walkway with its safe off-road 600-metre track and outdoor exercise machines is free for all to use. After the official opening of the new walkway the walkers returned to the community hall in Durrus where refreshments were waiting and the Club 200 Monster Draw took place with a prize fund of €5,500.

‘It has been a great day and once again I am delighted to see such huge turnout by the community on the Sheep’s Head. This new facility is for the whole community and I look forward to more days like this as our new grounds and all the amenities begin to be put in place,’ Joe O’Driscoll concluded.