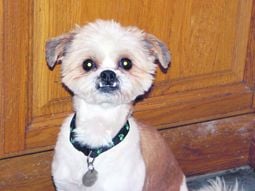 Gus is delighted with his new home.

A DOG that had been traumatised by children has found his forever home, thanks to an appeal issued by animal rescue workers.

Bill and Hazel Patterson contacted The Southern Star to say that their appeal – which appeared in last week’s paper – had a positive result and that ‘Gus, the mutt’ has been re-homed.

‘We got several phone calls and some firm offers for the wee fella from people who had seen the piece in The Southern Star – he was spoiled for choice,’ said Bill, who runs Jimmy’s Kennels, four miles north of Drimoleague. The three-year-old Shitzu King Charles-cross had been seriously abused by children.

Little Gus had been kicked, punched, swung around on its lead, and thrown over fences onto solid ground by cruel children.

Now that he has found his forever home, Bill said: ‘Gus is in happy valley. He is with a lovely couple that have several rescue dogs of their own – one or two of which have similar, or even worse issues, than Gus.

‘I’m also happy to say that he now has five-star accommodation and that the couple who are caring for him are such lovely, kind people that Gus took to them very quickly, especially when the nibbles were produced.’

Bill also paid tribute to the West Cork Animal Rescue Centre for the wonderful role they played in assisting Gus, and countless more rescued dogs from all parts of the county, and indeed the entire country.