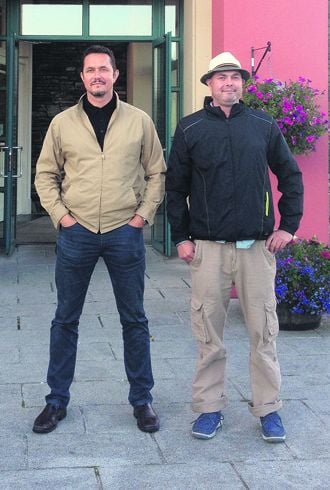 Williams Rossa Cole and Rossa Williams Cole have had a busy week recording all of the events commemorating their great grandfather, Jeremiah O’Donovan Rossa.

ALL that has been said and done to commemorate Jeremiah O’Donovan Rossa will not vanish into the ether, thanks to two of the Irish Fenian’s descendents, who have filmed it for posterity.

Williams Rossa Cole (47) and his brother Rossa Williams Cole (45), the sons of the late William Rossa Cole (yes, it is confusing) have been visiting the old stomping ground of their great grandfather, Jeremiah O’Donovan Rossa, for more than 20 years, but this week’s visit was the most memorable by far.

Williams, who is a documentary filmmaker, editor and director, together with his photographer and artist brother, Rossa, are engaged in much more than genealogical tourism – they are digging deep into the history and the character of O’Donovan Rossa and his wife, Mary Jane Irwin, with a view to creating a feature-length documentary in 2016, entitled Rossa Irish Rebel.

The brothers are also hoping that the public will help fund them to complete the documentary, and that it will make the rounds of the world’s most prestigious film festivals.

Every event that has been held in O’Donovan Rossa’s honour from Reenascreena to Rosscarbery, Skibbereen and beyond, has been faithfully captured on film, but the one event that stands out was the Skibbereen ‘March Back in Time’ on Friday night.

The spectacular show was a godsend for the filmmakers who came to Ireland looking to tell the story of Jeremiah and Mary Jane in ‘an unconventional way.’ They also want to focus on the New York story – which is of the same vintage as Gangs of New York – and to get down on film as much oral history as possible.

Speaking as someone who has filmed thousands of hours of footage in his career, Williams said the ‘March Back in Time’ was memorable for its attention to detail describing it as ‘powerful’, ‘magical’ and ‘intense’.

In this respect, and in so many other ways, Williams and Rossa said they have been helped at every turn, including being given permission to film Maria Young’s play Rossa at Rossmore. Actor Declan McCarthy, who plays Rossa, even obliged them by allowing them to re-film close-ups the following day.

Their West Cork visit, which was based at the Celtic Ross Hotel in Rosscarbery, also coincided with the unveiling in Rosscarbery by An Post of a new 70c stamp marking the centenary of Padraig Pearse’s oration at the graveside of O’Donovan Rossa. And, on Saturday, August 1st, they will feature prominently in a series of events marking the 100th anniversary of the patriot’s death.

For more information on the film, to donate to its production, or to see the trailers, check out www.rossafilm.com or rossafilm on Facebook.