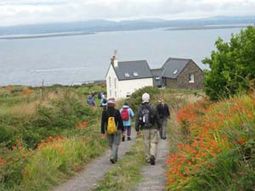 New sources of water were found on Cape Clear.

THE days of water shortages on Cape Clear are at an end after abundant sources were identified on the island.

Following months of surveys, drilling and water testing, commissioned by Cape Clear Co-Operative, four new sources of water were found on the island.

Last August, Bruno Teillard, a hydrologist with Aqua Geoservices, carried out an initial geological study that indicated various water-bearing lineaments that had not yet been used for purposes of water supply.

The survey was carried out during the widely reported ‘drought’ of last summer when a water tanker was placed in the island’s South Harbour.

Ironically, the hydrologist identified two streams flowing almost right past the location of the tanker – a water source capable of producing 174m3 of water daily.

In November, resistivity surveys were carried out which identified suitable location for four new wells: these were drilled in December and water was found in all of them.

The quantity of water discovered is substantial, being more than the total current requirements of the community. The quality of the water – according to an analysis carried out by the Environmental Laboratory Services in Cork – is considered ‘good’ and this was borne out by further testing at the Radiological Institute of Ireland.

Minerex Geophysics Ltd, Maynooth carried out the resistivity surveys, Guerin Pumps Ltd of Tralee did the well testing, and TJ Cross & Co did the drilling.

Members of Comharchumann Chléire Teoranta, the island co-operative, assisted in all stages of the survey work and testing, and one island representative is now of the opinion ‘We should bottle it!”