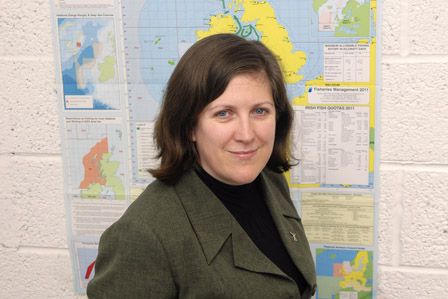 Eibhlin O'Sullivan, CEO of the IS&WFPO

REPRESENTATIVES of the Irish South and West Fish Producers Organisation (IS&WFPO) have told Marine Minister Coveney about their ‘desperation’ due to the combined pressures of quota restrictions, penalty points and the pending whitefish discards ban.

After meeting with Minister Coveney, the group said there were a number of items on the agenda but they all ‘circled back to the two key issues of concern facing the industry’.

They named these key issues as the penalty points system and the implementation of the landing obligation for the whitefish sector.

‘As we have repeatedly stressed over the years, Ireland is at a disadvantage in comparison to many of European counterparts due to the limited amount of quota allocated to it,’ explained Eibhlin O’Sullivan, CEO of the IS&WFPO, based in Castletownbere.

‘This means, for example, that the implementation of the discard band for whitefish stocks such as cod, haddock and whiting, which is due to begin implementation on a phased basis from next year, will have a far more significant impact on Irish fishermen due to the limited quota available to them.’

She added there had been a lot of talk about quota uplift – the additional quota which will be allocated in recognition of the reduction in discards. However, as this will be shared out by the EU to the various member states under agreed percentages, Ireland will only receive a small amount of this uplift, she said. She added that this fact was acknowledged by Minister Coveney.

‘A similar situation exists in relation to penalty points which were introduced in 2014,’ explained Ms O’Sullivan.

‘It makes it far more likely that an Irish fishing vessel will be allocated penalty points than its European counterparts.’ continued Ms. O’Sullivan.

‘We have, on a number of occasions, highlighted our serious concerns in the way in which the penalty points system has been implemented in Ireland.’ Ms O’Sullivan said she suggested to Minister Covene, once again, that the current system is unconstitutional and should be changed.

‘A common thread running through all the agenda items was the pressure felt by the Irish whitefish sector due to the limited quotas available to them – which is particularly evident at present for those vessels who concentrate on haddock and whiting in the Celtic Sea,’ she said.

‘Minister Coveney, while acknowledging that there had been quota reductions for these vessels this year, reiterated his view that, provided it is supported by scientific advice, these reductions should be reversed next year,’ Ms O’Sullivan concluded.