Wayne: on a mission to recruit for Fine Gael 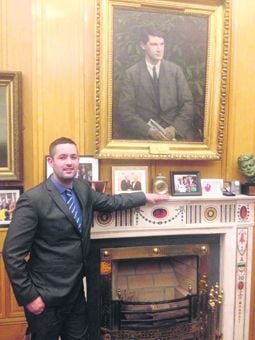 Wayne O’Sullivan: on a mission to recruit for Fine Gael in West Cork

A NEWLY elected youth officer for Fine Gael in Cork South West is on a recruitment drive.

Beara-based Wayne O’Sullivan, who took up his duties in March, said he would, in the coming weeks and months, be travelling the entire constituency to speak to, and recruit, new members for the Fine Gael party.

Wayne, who is very passionate about history and local politics, said he would be encouraging people ‘of all ages’ to speak about their concerns and issues. But he also sees his appointment as a means of ‘bringing young, enthusiastic people who have fresh, new ideas and opinions’ into the Fine Gael fold.

‘I believe that if you really want to change the future, you have to inspire young people and get them involved in the democratic process,’ he said. ‘We need to engage young people, and take an interest in what is important to them, their priorities, and their attitudes.’

The youth officer told The Southern Star he believes it is ‘imperative that young people become politically involved if they are to have a say in their own future.’

He claimed: ‘Young people’s feeling of exclusion from traditional ways of influencing the political decision-making process has led to a society that is sadly lacking in a youth presence.

‘If we remain detached,’ he added, ‘we will allow the same old politics to preside. Young people’s disengagement from political participation has long been a cause for concern and I strongly feel it is about time we addressed this issue.’

Wayne said that if you want to become a member of Fine Gael, or discuss any ideas or issues, you can contact him on 086 2121456.