This shop in Drimoleague, which has been renamed O’Driscoll’s for the series, features in the opening scenes of the first episode, with Southern Star branding on full display in the window. (Photo: Andy Gibson)

Mucky fields, long breaks between takes and 14-hour days were the norm for Maria C Henry who was an extra on the ITV drama set in West Cork and she loved every minute of it

LIKE many people, I can’t wait to watch Holding when it hits our TV screens shortly.

Not just because I love a murder drama, but because I hope I’m in it! When  the call went out for extras last summer, I applied and got the gig.

The application process to be an extra was fairly simple and I began by responding to the advert. They requested your details, a photograph, and your availability during the filming period. But even when you provided this material, there was no guarantee you would be chosen for a part.

A few weeks later, the call came. Would I be available the following day for a Covid test (they had their own Covid team that took care of everything from PCR testing to masks) and then for a day’s work? My role was a passer-by. Great, I thought, a challenging new experience.

I arrived at 6.15am to a misty and mucky field outside Dunmanway. Any notions about a glamorous job were gone as I tugged on my wellies. This was the first day they were using extras on set. Shane, the co-ordinator, introduced me to the make-up and wardrobe departments. I also met the other extras working that day. Shane advised the group about the general etiquette of the job. Don’t take photos, don’t share any details on social media and remain silent in and around the set area. We all went for breakfast and waited until the filming crew was ready. A couple of hours later, I did my bit by walking along a street with a shopping bag in my hand. I repeated this action several times over a 20-minute period. That was it. I didn’t see a single star. By 11.30am, I was on my way home.

To be honest, the filming was disappointing. Now the advantage was I got paid for the entire day, breakfast was provided and I had great chats with new people.

A week later, an email arrived asking if I would be interested in playing the part of a villager for one day. I took a chance, hoping for more activity. After my arrival in Drimoleague and a wait of five hours, a mini-bus took a small group of us to a ‘secret’ location.

As I approached the set, there were many faces I recognised from the big and small screen. At this stage I knew who was in the drama (sure ‘twas West Cork! How could you keep the secret?) An assistant director greeted us and gave me my instructions. I had my marker on the ground, so I knew where to stand and where to move to. This was serious stuff, and I had a specific job to do. I had a scene with several household names and I was delighted with myself.

After a few takes, director Kathy Burke appeared on the scene and told everyone they were doing a great job. New directions were distributed, sets rebuilt and cameras moved. We all took up our new positions, and they shouted ‘action’ several dozen more times. Hair and make-up shuffled around in between takes. We spent hours doing the same scene again and again from different angles. Everyone did their job happily as they understood the creativity. It was cold, yet no one complained. It was also the day I got to understand the craft a little more and how much hard work went into the entertainment I loved. Unlike my previous day’s experience, these scenes had the likelihood of making it to the screen. Although, I will never know until I watch the series.

The actors were fabulous and they entertained each other between takes. They chatted about previous jobs, food, the beauty of the local area and plenty of jokes were cracked.

These people were hard-working and delighted to be employed after their industry was decimated the previous year. They were there to do a job, to follow directions and to put their personalised slant into it. I was struck by the amount of patience everyone had, as some in-between scene breaks were long.

After that, I did several lengthy days (14 hours was the norm) playing my role as a villager. I worked until the last day in Castletownshend.

It turned out I was the longest serving background actor (posher name for an extra). On the last day, the entire crew gathered around and applauded the last standing extras and to thank us. It was a nice touch. I felt a twinge of sadness that this was the end of the road, but I was also glad as the unforgiving winter weather of West Cork was creeping in.

And as for the secrets of the stars – Pauline sat and did her knitting in between long takes. Siobhan (in her wheelchair as she broke her leg) had all around her in stitches with her witty humour. Conleth liked a cuppa and the newspaper. And as for Kathy Burke, she was simply lovely. So kind and easy-going with everyone. Not a single air or grace to be seen.

I was privileged to see such dedication by a team who came together for a short period. Everyone was professional, from the actors, set designers, continuity team, wardrobe to assistant directors, directors, camera crew all the way to producer and director, Kathy Burke.

I didn’t see a single Hollywood tantrum or spectacle.

If you get the chance, I would highly recommend the experience of working as an extra to anyone interested in the creative process of how TV shows are made. It doesn’t pay the big bucks; the hours are long and there is a lot of hanging around. However, they pay minimum wage by the day; they feed you well; they make you as comfortable as possible with a green room and you meet interesting people from all walks. Like everything in life, it’s not for everyone. But if you grab the opportunity, I recommend you bring with you: an open mind with a bucket load of patience, a book, music, podcasts or something to pass away the time.

Hopefully, you might get to see the craft of a producer, director and their team create a beautiful piece of art.

I hope many love the series and our Graham is proud of the adaptation of his novel. Hopefully, it will attract other production crews to West Cork. They are fantastic for the local economy and the arts.

WEST Cork farmer Padraig O’Driscoll is more excited than most people about seeing Holding, as his home and farm feature in it.

His own ‘holding’ in Coolbawn, outside Skibbereen, is right beside the home place of Dominic Treadwell Collins’ father Michael. ‘Michael went to school with me so Dominic knew every light switch, and every screw in this place. He wrote the script with it in mind,’ said Padraig. 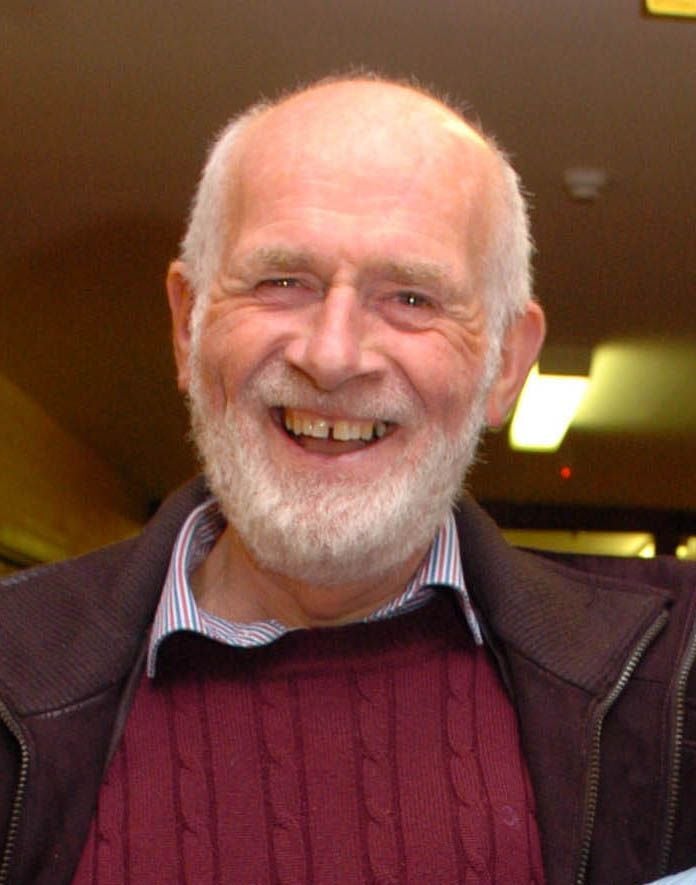 Padraig O’Driscoll:
vacated his property
for the filming.

Himself and his wife Eileen had to vacate their property for days on end during the filming, leaving at 6.45am and not returning until late evening.

‘I remember one morning we actually had our breakfast on the beach. We enjoyed lots of day trips around the place while the filming was going on,’ he said.

Their own possessions were removed and stored by the crew, and for their efforts, Padraig said he secured a donation to Cancer Connect, a group he volunteers with.

The series is expected to bring a boost to local tourism with Ballydehob and Schull name-checked, along with mention of going for brunch in Skibbereen!