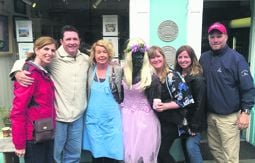 WHEN Elizabeth Goddard from Connecticut read on Facebook about her first cousin Ernie’s message in a bottle turning up on Long Strand recently, she said she had to meet the Clonakilty women who found it.

As it happened, Elizabeth and her husband Patrick and her cousins, Kate and Bill Wilson, were all coming to stay in Kinsale after visiting Scotland, so a visit to the Lettercollum Kitchen Project, where Bridget Healy works, was top oftheir agenda.

As reported in The Southern Star two weeks ago, Ernie Le May’s message in a bottle washed up a year after he threw it off the Florida coast.

He had been ‘finking’ with his friends – a term they used for fishing and drinking.

Bridget Healy, Caitlin Ruth and Philomena Flynn subsequently found the bottle on the West Cork beach, read his messages and made contact by email with Ernie. ‘We were coming to stay in Kinsale for a short visit and on our way here from Scotland, we saw the story of Ernie’s bottle all over the internet, and we couldn’t believe it,’ said Elizabeth Goddard, speaking to The Southern Star. ‘We had no idea that he sent a bottle and that these people from Clonakilty ended up finding it.’

‘It’s such a small world really and we’re planning to surprise Ernie with pictures of us at Long Strand. We found his letter in the bottle very hard to read, but it was funny all the same. We plan to send him a picture of us ‘finking’ in Clonakilty, as he doesn’t even know we’re in Ireland yet.’

Once they arrived in Kinsale, Elizabeth contacted Bridget and they all arranged to meet last week.

‘We were delighted to hear that Ernie’s cousins were in the area. It was great to meet them and such a coincidence really. I drew them directions to Long Strand so they could see where we found his famous message in a bottle,’ said Bridget.

Ernie LeMay himself was delighted to receive a copy of The Southern Star that we posted to him with his story on the front page from two weeks ago.

‘In a world where we hear so much bad news, it’s so nice that something so cool makes the front page. I’m going to frame it and hang it my office so my wife can constantly be reminded of my two minutes of fame,’ said Ernie.