Martin Shanahan getting his award for Fishy Fishy 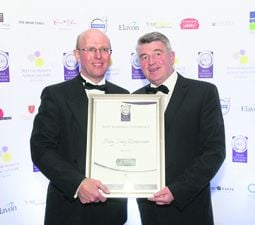 IT was celebrations all round for several West Cork restaurants who are toasting their success at this year’s Irish Restaurant Awards.

Over 800 restaurateurs and industry players turned out in black tie in the Double Tree by Hilton on Monday night to hear that Kinsale’s Fishy Fishy Restaurant was the ‘Best Seafood Experience in Ireland.’

Kinsale was in fact well represented, with Toddies at the Bulman awarded ‘Best Gastro Pub in Munster’ while the Black Pig wine bar was named ‘Best Wine Experience in Munster.’

Bantry also took an award, with Ocean restaurant at The Maritime Hotel winning the award for ‘Best Eco Friendly Restaurant’.

There were over 30,000 nominations from around the country, Restaurants Association president Anthony Gray pointed out.

West Cork was also represented on the dinner menu, with Ballydehob’s Skeaghanore Irish Duck included in the gala meal’s soup course, while Toonsbridge’s Dairy Smoked Scamorza provided part of the cheese board.