By Catherine Ketch A STORE selling bird seed in Macroom is celebrating the fifth year of visits from a cheeky robin, who often waits at the front door for the shop to open. 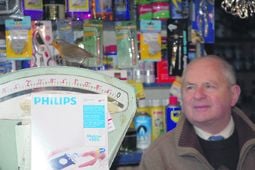 A STORE selling bird seed in Macroom is celebrating the fifth year of visits from a cheeky robin, who often waits at the front door for the shop to open.

Twomey’s Hardware in West Square, Macroom, is the destination for this feisty bird who picks up her treats on Frankie Twomey’s counter most mornings.

‘She comes in the morning – first thing. The door wouldn’t be open and she’d be waiting. She’d come in and pick away at the food. She’d go off and come back again – maybe an hour after – and then she might come in several times during the day,’ owner Frankie said.

‘She lands on the weighing scales, or on the counter, and flies all round the shop, staying a while and taking off again when she pleases.’

The customers know the little robin well. ‘Oh, the amount of women that come in when they’re buying the seed and ask “Is ‘herself’ here?” And they’ll wait until she’ll come up and they’re delighted to see her,’ according to Noel, Frankie’s son.

Noel says she appears to have a ‘young lad’ in more recent times. ‘There’s a young bird there this year. He doesn’t come that often. He was there now two days ago alright. He came with her two or three times that day, but we haven’t seen him since.’

Customer James ‘Goalie’ Deasy is a fan of the little red-breasted one: ‘It’s fantastic. It’s lovely to see her around the place. She perched up on my shoulder there one day,’ he said.