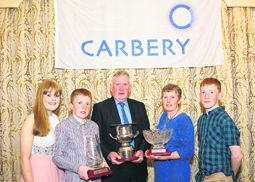 THE Carbery Quality Milk Awards function at the Fernhill House Hotel recently clearly spelled out the important role which dairy production plays, not alone in a vibrant agricultural sphere, but in the development of the economy in general.

With the end of the quota regime farmers will have freedom to increase production, but this will call for increased processing capacity, with a greater variety of products going to markets all over the world. Addressing the gathering, Dan MacSweeney CEO of the Carbery Group, having congratulated the award winners from the four co-ops, stated how gratifying it was to see standards improving each year and that gives them a foothold in other markets.

He made special mention of their new base in Brazil which is manned by a team from West Cork. However, the need for quality is the keyword all over the globe. The products from their factory in Ballineen are amongst the best in the country and are quite capable of commanding a niche position in world markets.

Since quality is most important, he said, we must keep abreast of the times as customers want food produced naturally and the most natural way is from a grass-based system, which is well-adapted to the dairy farmers of West Cork. He went on to say that it is to the credit of all those who qualify for all these awards that they are raising the standards to a high level of quality, thus ensuring Carbery’s prime position abroad.

Mr MacSweeney complimented the judging panel of John McNamara (Teagasc), Paddy Barrett (Carbery) and the dairy managers of the four West Cork co-ops, who carried out an intensive scrutiny of the many suppliers who made the grade.

For the final shake-up three were selected from each of the four co-ops – a total of twelve from the 1,300 suppliers operating in different farming conditions from Kinsale to the Kerry border, so to make it to the Top 12 was indeed an achievement in its own right for which each of them was commended as an example for all to follow.

There was a winner and two runner-up prizes for those of each co-op and one overall prize, which was on by the Hurley family of Caherbeg, Rosscarbery. Dermot O’Leary, chairman of the Carbery Group, in congratulating the prizewinners, paid a glowing tribute to the management and staff of Carbery for making this West Cork enterprise a flagship of the dairy industry in Ireland and he complimented them for their research and development work, which has opened-up markets for them all over the world.