One of the new wheelchair bus stops, on North Street in Skibbereen

FIANNA Fil's Cllr Margaret Murphy O'Mahony has called on Cork County Council to step up to the mark with regard to ensuring that all towns on Bus Eireann routes provide accessible bus stops. 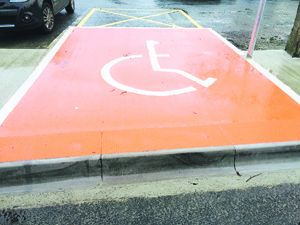 FIANNA Fáil’s Cllr Margaret Murphy O’Mahony has called on Cork County Council to step up to the mark with regard to ensuring that all towns on Bus Eireann routes provide accessible bus stops.

At this week’s meeting of Cork County Council, she asked the authority to ascertain with Bus Eireann which county towns their specially adapted buses pass through. She then wants the Council to then ensure that each of these towns has an adapted bus stop area.

Cllr Ian Doyle seconded the motion and many other councillors spoke in support.

Cllr Murphy O’Mahony earlier told the Southern Star that it had come to her notice that there are many towns on the routes for Bus Eireann’s specially adapted buses, but they can’t stop there as the stops haven’t been adapted yet.

Her own home town of Bandon is an example of this, she said, as specially adapted buses pass en route from Bantry to Cork every day, but the wheelchair element cannot be utilised due to the fact that the town’s bus stop is not accessible. ‘In this age of inclusiveness, it is hard to fathom how a specially adapted bus cannot be used by people of a town, only because the bus stop is not accessible. Surely this can be easily put right,’ she said.

Margaret praised Bus Eireann’s efforts and said: ‘Now is the time for Cork County Council to stand up and be counted, with regard to disability access.’

Martin Walsh, acting regional manager of Bus Eireann in Cork, revealed at last week’s meeting of the Bandon Kinsale Muncipal District, that there were 15 new buses coming on the Cork city fleet from the end of the month, along with a number of new coaches and Expressway buses.

A number of councillors addressed the Bus Eirean representative with their observations on the service and the suggesitons made by locals in their areas, especially in relation to additional services or changes to existing routes.