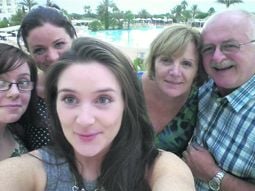 Enjoying their holiday in Sousse before the attacker struck. Siobhan, Claire, Amy, Teresa and Tomás O’Riordáin.

FOR the second time in his life, Tomás O’Riordáin from Coolea found himself caught up in the middle of a terrorist attack.

Tomás and his wife Teresa, who is originally from Kilnamartyra, and their three daughters, Claire, Siobhan and Amy, were on holidays in Sousse last Friday when a gunman killed 38 people at the resort.

Tomás, who is now retired and lives in Enfield near London, was with his family at the Palm Marina Hotel, close to the Imperial Marhaba hotel, where Seifeddine Rezgui carried out his attack.

Tomás and his wife and daughter Amy were sunbathing near the gate of their complex and quite close to the beach last Friday, while Claire and Siobhan were at the beach, he told The Southern Star.

‘At around 12pm we then heard the first gunshots. We thought it might be firecrackers and we saw birds flying away too. Then there was a second lot of shots, and we could hear shouting. We stood up and then people came running in, saying there was a gunman on the beach,’ he remembered. ‘That’s when we jumped up and the first reaction was to go and get the two girls. Thankfully, they were making their way to the gate. When the girls saw everyone running, they ran back towards the hotel straight away.’

While they could hear gunshots in the distance, Tomás decided they should head for their room, where they locked the door and closed the curtains.

‘We kept away from the window as we didn’t know how many gunmen were out there. It all seemed to happen so quickly, we didn’t have much time to think about it.

‘We could hear an explosion and other shots being fired and we just texted family and friends to say we were okay. We were in the room for about an hour-and-a-half and we started watching BBC World News. That’s when it started to unfold and we realised the reality of what happened.’

Once it had quietened down, Tomás and his family went down to the lobby and he said the staff of the hotel were fantastic. ‘We went down to the beach the day after to pay our respects to those who died.

‘We flew out that night back home. There were a few empty seats on the plane on the flight back, and it got me thinking who should have been sitting in those seats,’ he recalled. ‘We’ve been a bit shell-shocked for the past few days since we got home Sunday morning, but our friends and neighbours have been checking to see we’re okay.’

Tomás has told his story on a number of radio stations this week, including Cork’s 96fm, where he told PJ Coogan about his ordeal on The Opinion Line. In another twist of fate, in 2005, Tomás, then working for London Underground as a group station manager at Liverpool Street, was also caught up in the 7/7 terrorist attacks, when a bomb exploded on one of the trains.

Luckily, on both occasions, he escaped without injury.