PULL THE OTHER ONE: Fianna Fail leader Mícheál Martintrying his hand at filling a pint at the Horse &amp; Hound pub in Skibbereen last Friday with Cllr Margaret Murphy O'Mahony and owner Ger Carey. 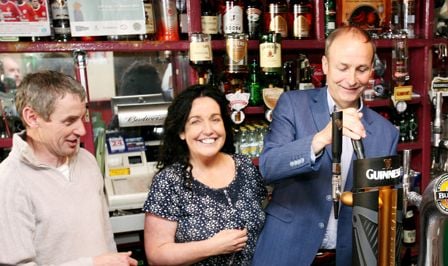 PULL THE OTHER ONE: Fianna Fail leader Mícheál Martintrying his hand at filling a pint at the Horse & Hound pub in Skibbereen last Friday with Cllr Margaret Murphy O’Mahony and owner Ger Carey.

ALAN Coleman never mentioned his disappointment to Fianna Fail leader Micheal Martin any time during the year prior to his resignation from the party last month, the FF leader said last week.

Speaking exclusively to The Southern Star, Deputy Martin said: ‘It’s the old story – he didn’t canvass any delegates and when you campaign, you knock on people’s doors.’

The Cork party leader was referring to the former Mayor’s decision to drop out of the Fianna Fail nomination convention, which was subsequently won by Cllr Margaret Murphy O’Mahony.

He said Cllr Coleman didn’t ‘reciprocate the loyalty and trust’ shown to him by the party, and noted he had voted with the FG party at a meeting in Bandon last week.

‘He went from organising a pact against Fine Gael, to now voting with them,’ he commented.

Cllr Murphy O’Mahony is the party’s sole candidate in the constituency, for the forthcoming general election, which Deputy Martin says is likely to take place next Spring.

‘We are seeking to have one candidate in any region where we have lost – we have 22 constituencies where we have no seat,’ he said, and Cork South West is one of those.

‘Denis O’Donovan has stood down, and he gave distinguishing service and has been a very good leader for West Cork,’ the party boss said. ‘He has played a great part lobby for fisheries policy.’

Senator O’Donovan is ‘fully on board’ with the selection of Cllr Murphy O’Mahony, he said, ‘in this very large constituency.’

During his trip to Skibbereen to co-incide with the O’Donovan Rossa torchlit procession and the first night of Skibbereen Arts Festival, Deputy Martin said that he was very familiar with Cork South West, given his long association with the region for summer holidays.

As a child, his father – who drove sugar beet lorries in the area – would bring the family to Ardfield and Galley Head, while Deputy Martin’s wife’s family are from Courtmacsherry, where the family now holidays every year.

‘Her father taught in Lislevane and Timoleague,’ he said. ‘When I married Mary O’Shea, I married Courtmacsherry,’ he joked.