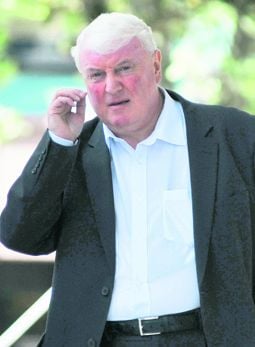 A CORK priest has been jailed for four years for hiring the Continuity IRA to issue death threats and intimidate his nephew into dropping a legal action he was planning against him.

During the case, the court heard that three men called to the nephew’s place of work in Innishannon, in June 2012, and threatened him.

Fr Francis Kelleher (59) pleaded guilty to four counts of coercion in relation to the threats made against his nephew, Niall Kelleher (43) on a number of dates in 2012 and 2013.

Fr Kelleher, a native of Cloughduv in mid-Cork and a priest of the Diocese of Cork and Ross now resident in Cork city, pleaded guilty to intimidating his nephew over a solicitor’s letter.

Judge Seán Ó Donnabhain said that one of the fundamental principles of justice was the witnesses in either civil or criminal cases could make statements without fear or threat.

‘What happened was appalling behaviour and that it came from a man who at the time professed to be a priest, well,’ said the judge of the priest, who is now out of ministry.

Det Garda Micheal O’Regan told Cork Circuit Criminal Court that Mr Kelleher had sent a solicitor’s letter to his uncle, the priest, with regard to a civil matter on May 24th, 2012.

However on June 27th 2012, three men called to Mr Kelleher’s house and met with his 13-year-old son and then they called to where Mr Kelleher was working in Innishannon and threatened him.

‘They said to Mr Kelleher: “We’re from the Continuity IRA – withdraw the statement against the priest and drop the case or you won’t see the following week”,’ he said.

Nine days later, on July 6th 2012, Mr Kelleher received a phone call when a man told him to ‘Drop the case and stop making up lies about Francis, it’s all about money, drop the case or die.’

Two days later on July 8th 2012, Mr Kelleher received two more phone calls – the first telling him: ‘It’s your last chance’ and a second calling telling him ‘You blew it’.

The threats stopped for a period but on January 8th, 2013, Mr Kelleher received another threatening call at home urging him to withdraw the statement he had given his solicitor.

‘You’re a nice guy, Niall, but I’ve been paid a lot of money to take care of you in relation to your statement,’ said the caller to Mr Kelleher, who was deeply disturbed by the threats.

Mr Kelleher had contacted the gardaí and upped his personal security at his house as he took the threats to himself and his family very seriously and gardaí put a watch on his home.

Gardaí regularly carried out patrols in the vicinity of Mr Kelleher’s home as they began an investigation into the threats which they quickly traced to Fr Kelleher, the court heard.

Det Garda O’Regan said gardaí arrested Fr Kelleher on November 25th 2013 and he admitted that he had paid €4,000 to someone to have his nephew threatened.

In a Victim Impact Statement submitted to the court and read by Judge O Donnabhain, Mr Kelleher told of the turmoil the threats caused to him, his wife and their three young children.

He still had to get up every morning to go to work to support his family but he found himself checking under his car every morning and checking to see if he was being followed.

Mr Kelleher said, in his Victim Impact Statement, that he had never heard of the Continuity IRA except on TV, but being threatened by the organisation that he would be killed had terrified him.

Defence counsel Tom Creed SC put it to Det Garda O’Regan that Fr Kellehe, in his work as a hospital chaplain, had confided in a man visiting the sick with a religious relic.

The man told him that he knew people in the Continuity IRA who could sort out his problem with his nephew if he handed over money and Fr Kelleher paid over €4,000.

Mr Creed said that Fr Kelleher had never intended for things to turn out as they did, but they had rollercoastered out of his control under the influence of this man with the religious relic, and he had since lost his job as hospital chaplain.

Fr Kelleher took the witness box at Cork Circuit Criminal Court to issue a personal apology to his nephew for the upset and distress that he had caused him and his young family.

‘I’d like to say that I apologise profusely for what happened – I never meant it to happen like this – I apologise to Niall now from this witness stand,’ said Fr Kelleher.

Judge Ó Donnabhain said it was a profoundly upsetting case and he thankfully had never before come across a case of coersion – which carries a maximum sentence of five years.

He accepted that Fr Kelleher had pleaded guilty just before the case was due to go to trial, but there were aggravating factors, including the fact the threats went on for six months.

He accepted that Fr Kelleher was remorseful, had no previous convictions and was unlikely to come to garda attention, but it was a most serious offence.

‘I have to take a stand against fellows who get cowards to go out on the streets and threaten people,’ said Judge O Donnabhain, as he jailed Fr Kelleher for four years.

After the sentence ws handed down by Judge O Donnabhain, Bishop John Buckley of the Diocese of Cork and Ross issued a statement to the press. He confirmed that the church has begun canonical proceedings against Fr Kelleher over his actions.