BY JACKIE KEOGH STANDING room was in scarce supply at a packed public meeting that was held in Clonakilty on Monday night for people interested in developing West Cork as a hub for outdoor pursuits. 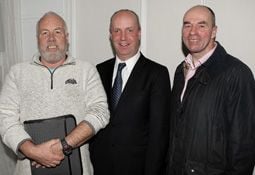 Pictured at a meeting in the Emmet Hotel, Clonakilty to establish West Cork as a hub for outdoor activities were, from left, Jim Kennedy, Jim Daly, TD, and Steve Redmond.

STANDING room was in scarce supply at a packed public meeting that was held in Clonakilty on Monday night for people interested in developing West Cork as a hub for outdoor pursuits.

The meeting was hosted by Jim Daly TD, with the intention of setting up a working group to develop outdoor amenities and make West Cork a national and international destination of choice for activity holidays.

People from all over West Cork travelled to the meeting, with contributions from people living in coastal areas such as Schull, Baltimore, Courtmacsherry and Clonakilty, as well as the more inland areas of Bandon, Ballingeary, Drinagh, Drimoleague and Inchigeela, among others.

Jim Kennedy of Atlantic Sea Kayaking spoke about the ongoing development of waterways throughout the region. He said these routes would be actively promoted and developed as ‘blueways’.

‘The ultimate goal of such a project,’ according to Mr Daly, ‘is that people flying into Cork would be able to walk or cycle the entire route to and throughout West Cork.’

Sean Collins from Drimoleague spoke about the West Cork Cycling Club’s plans to develop a 200km route for cyclists – all of which would be available on a downloadable phone app.

And Ocean’s 7 champion Steve Redmond from Ballydehob spoke about the enormous potential of the West Cork coastline, particularly for wild swimming, which continues to grow in popularity.

Finbarr Harrington, chairman of the newly formed Tourism West Cork group, advised the meeting that a steering committee has been set up to actively promote and market the region.