Some of the drugs found in the sea. 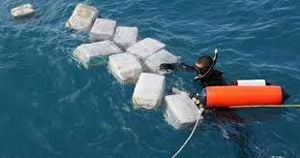 Some of the drugs found in the sea.

A CIRCUIT court judge may have erred in principle when sentencing an Englishman to a record 30 years in jail for his part in the biggest ever drugs seizure in the history of the state off the West Cork coast, the Court of Criminal Appeal has said.

The Court of Criminal Appeal last week said it will look at the case of 56-year-old Perry Wharrie afresh before sentencing him on October 16th next for the drug smuggling offences arising from the seizure at Dunlough Bay, Mizen Head.

Wharrie received the longest ever sentence for drugs offences in the history of the state when he was jailed for 30 years his part in the record €440m cocaine smuggling operation which came undone at Dunlough Bay on July 2nd 2007.

Judge Seán Ó Donnabháin handed down the 30 years term to Wharrie (56) and a co-accused Martin Wanden (52), following a 42-day trial at Cork Circuit Criminal Court in 2008 after both men and third accused, Joe Daly, denied possessing the cocaine for sale or supply.

Wharrie, from Pyrles Lane, Loughton in Essex in the UK, later appealed the conviction to the Court of Criminal Appeal but the three judge court dismissed the appeal against conviction in 2013 and he then lodged an appeal against severity of sentence.

This week at the Court of Criminal Appeal in Dublin, Mr Justice John MacMenamin, Mr Justice Michael Moriarty and Mr Justice Anthony Hunt said that it was ‘the preliminary view’ of the court that Judge O Donnabhain had erred in principle when sentencing Wharrie.

The three-judge court indicated that it wished to look at the case again and would impose sentence on Wharrie on October 16th. Wharrie, who was in court for the hearing, was remanded in continuing custody, to appear again on that date.

Wharrie, Wanden and Joe Daly (48), from Carrisbrooke Avenue, Bexley, Kent, who was sentenced to 25 years in jail by Judge Ó Donnabháin, were members of a major London-based crime gang due to collect the 1.5 tonnes of cocaine off West Cork.

Wanden and another member of the gang, Stephen Browne, went out in a Rigid Inflatable Boat (RIB) to rendezvous 30 miles off the West Cork coast with a catamaran, the Lucky Day, which was crewed by two Lithuanians and another Briton, Gerard Hagan (31).

The Lucky Day had sailed across the Atlantic from Barbados, carrying the drugs and the gang successfully transferred the 62 bales of cocaine from the catamaran on to the RIB with Hagan from Merseyside also transferring from the boat to the RIB to come ashore in West Cork.

But the plan went awry on the way back to shore when one of the gang put diesel in the RIB’s petrol engines which cut out, and the RIB was left to the mercy of the waves and capsized in the choppy waters of Dunlough Bay near the Mizen Head.

The crew of Wanden, Browne and Hagan were thrown into the water as were the 62 bales of cocaine and while Browne and Hagan made it ashore, Wanden had to be fished from the sea by the RNLI Castletownbere Lifeboat while the RNLI Baltimore lifeboat picked up the drugs. Wharrie and Daly, who were watching from the shore, fled the scene on foot when they saw the operation go awry but they were spotted by members of the Irish Coastguard Cliff and Coastal Rescue team from Goleen and were arrested two days later near Schull.

Wharrie, Wanden and Daly all denied the drug smuggling charges and their cases went to trial in May 2008 but Hagan pleaded guilty to possessing drugs for sale or supply, and was sentenced separately in November 2008 when he was jailed for ten years.

At the time, Wharrie, originally from the East End of London, had been freed on licence by the British authorities in 2005, having served 17 years of a life sentence for the murder of a policeman during an armed robbery at a bank in Hemel Hempstead near London in 1988.

Although Wharrie denied being the gunman who shot off-duty police officer, Frank Mason (27) dead, he and co-accused Charles McGhee and getaway driver, Irish-born James Hurley, were all jailed for life for the murder.

The British authorities have sought Wharrie’s extradition and he is facing being returned to the UK to serve the remainder of his sentence for PC Mason’s murder when he completes his drug sentence now scheduled for determination on October 16th.