Children playing on the new playground at the school.

HUNDREDS of children in the locality are back to normality this week after almost six months off school. Maria Power, principal of Our Lady of Mercy NS, told us that Monday August 31st, was an exciting day for parents, pupils and staff.

The pupils from senior infants to sixth had a staggered start time from 8.50 until 9.10am. The new junior infants had their own designated five minutes each from 9.15 until 10.30am to walk into their new classroom and to leave mom or dad behind.

Miss O’Brien, Miss Levis and Miss Mullins had organised bubble-making machines outside of the junior infant doors and perhaps this lovely surprise accounted for the absence of tears from new infants and their parents. The staggered drop-off time, based on family surnames in alphabetical order, will continue for the schoolyear. 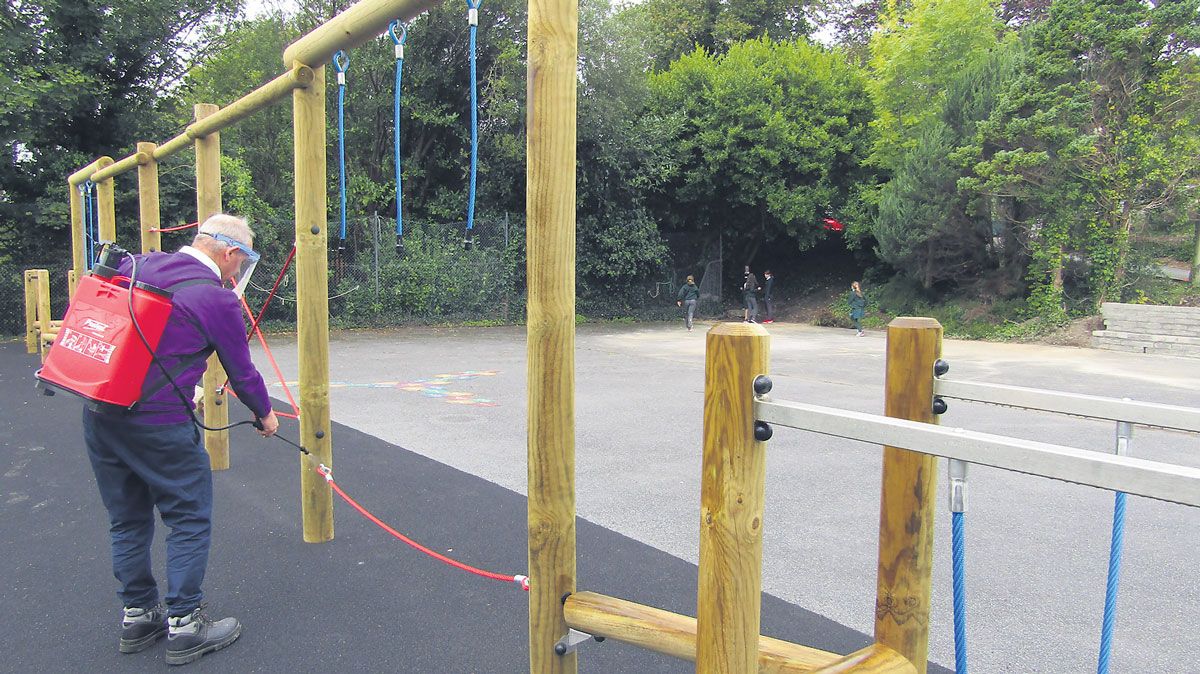 Michael, the caretaker, sanitising the playground at Our Lady of Mercy NS, Bantry.

It worked very well on the first morning as pupils were able to keep their social distance as they walked up the avenue.

Two-metre markings are painted on the avenue. To avoid over-crowding at the front of the school building at home time, pupils from first to sixth class will have staggered dismissal times from 2.30 to 2.40pm. Break times and lunch times are also staggered.

Teachers allocate time on their timetable for hand washing. Twenty-six hand sanitisers have been installed around the school.Trojan work has taken place behind the scenes to ensure that the policies and practices necessary for a school to meet the Government’s Return to Work Safety Protocol have been put in place.

Mrs Power, the principal, said that the children were super excited to be back at school.

They played with their own class bubble at lunchtime on the three playgrounds and it was wonderful to hear the sound of children laughing and screeching.

The school is only made of bricks and mortar. It is the children and staff who bring it to life: ‘It’s absolutely great to be back with an amazing staff, fabulous children and parents.’

Meanwhile, Melanie O’Sullivan acting principal at St Brendan’s NS on the Square told us the following: ‘This year, we are in a different position to the bigger schools because we are down to one teacher (me!) and we also have a learning support teacher for several hours in the week. I think it is the only time that we have been fortunate to have smaller numbers.

‘Because our pupils are in one class “bubble,” they are able to arrive at the same time, 8.50am, they come into the school, one at a time, after a staff member meets them at the door. (we also have a full-time SNA in school).

‘They are very good at socially distancing when they enter the building and in the classroom and are great at sanitising their hands, etc. Children adapt so easily.

‘The junior infants get collected at 12 noon for the first week and, after that, they finish at 1.30pm. The bigger ones walk down with me to the gate at 2.30pm to meet their parents.’