Gus is looking for his 'forever home' – without children 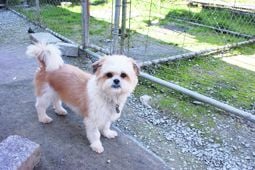 A RESCUED Shitzu King Charles cross is looking for ‘a forever home’ after having been seriously abused by children.

Bill and Hazel Paterson who run Jimmy’s Kennels, four miles north of Drimoleague, confirmed that the three-year old dog was kicked, punched, swung around on its lead, and thrown over fences onto solid ground by children.

‘Gus has definitely had it rough. He has been knocked from pillar to post, literally, and is in need of some major TLC,’ according to Bill.

‘He came to us from a lady, living outside of West Cork, who rescued him from the situation. She had him for two months but was concerned for his welfare and brought him to us via a contact at the West Cork Animal Rescue Centre.

‘This little fella needs more time and input than we can give him,’ Bill told The Southern Star, ‘so I am asking, on his behalf, for a forever home.