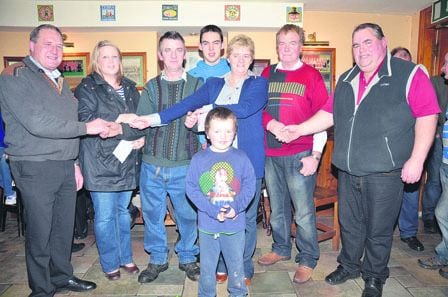 The €19,100 proceeds, up on the previous year’s, were presented at the Cill Eanna Bar in Johnstown recently and some charities benefited for the first time. The committee was praised highly for its work in collecting the money, largely door to door, while braving both dogs and the bad weather.

The recipients unanimously expressed their gratitude to the committee for what in every case was an impressive amount of money towards their particular causes.

An emotional Reggie Chambers, thanking the committee, said he didn’t know what they would do without CoAction. Speaking of his own experience with his own son, he said they had brought him to the stage where he could play the procession out of the church on the accordion for his grandmother’s funeral.

‘I never realised that I would be able to stand up here today and say he played my mother-in-law out of the church yesterday with an accordion. It was the most emotional thing and I was very proud of him.

Representatives of each of the nine schools expressed their thanks for funds otherwise hard to raise in these times. Clonakilty Hospital’s donation will go towards the residents the gathering was told.

‘You’re a wonderful community to raise so much and support so many local charities,’ Moira Deasy from Dunmanway Hospital said. Bernie Buckley Macroom Community Hospital receiving funds for the first time thanked the committee and the hospital visits committee from the same parish.

It was also the Community Centre in Terelton’s first year receiving funds saying the centre was running very well. Inchigeela-Ballingeary senior citizens also received funds for the first time. The money will go towards an outing during the summer, Jerry Herlihy said.