By Liz Dunphy 'It's lovely to be here, boy,' were Mary Kennedy's opening words to this year's Cork Person of the Year awards, said in an impressive Cork accent for a Dubliner to muster. 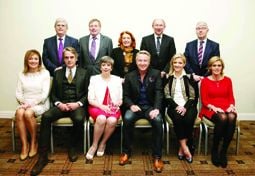 ‘It’s lovely to be here, boy,’ were Mary Kennedy’s opening words to this year’s Cork Person of the Year awards, said in an impressive Cork accent for a Dubliner to muster.

The television presenter of RTE’s Nationwide programme also commented that, although technically, one Cork person is nominated as the Person of the Month, and the overall winner is chosen from this list of very worthy recipients, there were so many brilliant nominees in the county that this year the judging panel had to choose from 18. Kennedy announced that it was ‘a Cork thing’.

Whether a Cork thing or not, it certainly speaks volumes about the talented people and rich communities that we have here.

Five of the nominees were linked by the weaving bonds that make our Cork communities so strong. Ciara Judge, Emer Hickey and Sophie Healy-Thow were nominated for their world-class and multi-award winning science project. Pat O’Connell of O’Connell’s Fish Shop was a fellow nominee and he had given the polystyrene boxes that the Kinsale students used, which travelled to the Google awards in the US.

And poignantly, one of these brilliant Kinsale students, Ciara Judge went to Dunderrow, the school where Louise O’Keefe was originally abused, though Judge’s family made it clear that the school was truly excellent when Ciara went there as a child. So Cork connections run strong and these interlinking stories and achievements are a reminder of the importance of helping others in whatever way we can, whether it’s lending people materials, fighting for justice for many nameless faces or just being supportive of friends and neighbours, you may be surprised by the greatness that it can help inspire.

West Cork was well represented with six nominees in total.

There was Louise O’Keefe who won the overall prize; Ciara Judge, Emer Hickey and Sophie Healy-Thow from Kinsale; Dr Jason van der Velde for his voluntary work with West Cork Rapid Response; and sports star Briege Corkery from Cloughduv, who captained the All Ireland winning Ladies Football team. Jeremy Irons (the world-famous actor who has a castle in Ballydehob) was last year’s Honorary Cork Person of the year, and he handed over the mantle to Michael Flatley at the awards.