Casey on a class trip to South Africa last year. 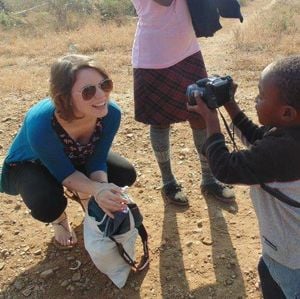 Casey on a class trip to South Africa last year.

A WEST Cork woman is walking the length of Ireland and doing it all for charity.

It is a mighty challenge for 22-year-old Casey Higgins-King who grew up in Drinagh. Casey’s adventure will begin on September 10th when she starts at Mizen Head and hopes to finish 15 days later at Malin Head in Co Donegal, having walked 550kms in total.

Casey is raising money to fund a three-month trip to Zimbabwe in October with Progressio, an international development charity who are active in a number of third world countries including Somalia and and Nicaragua.

While in Zimbabwe she will be working on agricultural projects that create sustainable farming techniques, educate people about HIV and promote the voices of the poor and marginalised, particularly women, and to increase responsiveness of governments towards these groups.

Having recently graduated from the University of Roehampton in London with a degree in Zoology, Casey told The Southern Star that she wants to take what she’s learnt about sustainable living and bring it to poor countries like Zimbabwe.

‘I have a passion for agriculture and growing food and how growing our own food can increase jobs. It’s about eating locally and I’m very passionate about that,’ she said.

Along the route to Malin Head, Casey will be staying in hotels and B&B’s that have generously offered her a free room for a night and she will also take to a bit of couch surfing as well. Casey thinks that the weather and fatigue will be the biggest challenges on her walk.

Casey explained that she chose to walk the distance rather than cycle because she wants to immerse herself in the places she’s travelling through.

Taking a trip around Ireland is something that Casey has always planned to do, but never got around to, and she is now taking the opportunity to get to know the country she grew up in.

‘People go travelling and talk about how beautiful other places are, but Ireland is pretty too, and I kind of want to show that. I want to get to know other places in Ireland before I go off and learn about culture in Africa.’

The longest distance that she will walk in one day is 49km from Ballybofey to Buncrana in Donegal. ‘There’s a lot of pressure because some people have donated lots of money and I know that I’ve never done anything like this before, and I’m just going for it.’ she said.

If you would like to donate, you can visit https://www.justgiving.com/Casey-Higgins-King/, and you can keep up with her progress on her Facebook page, ‘Casey’s Mizen to Malin walk for Progressio, Zimbabwe. ‘