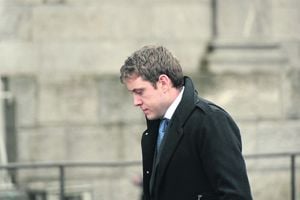 A SEVEN-year sentence imposed on a man who was four times over the limit when he crashed his BMW into a roundabout in Skibbereen, killing a woman and paralysing her friend, was ‘out of line’ with other sentences for dangerous driving, the Court of Appeal has found.

Sean Casey (27), of Cooragannive, Skibbereen, had pleaded guilty to dangerous driving causing the death of Megan Johnston (22) and causing serious bodily harm to Kate Petford (24) who was left paralysed following the crash at Skibbereen on April 8th, 2013.He was sentenced at Cork Circuit Criminal Court to seven years’ jail and disqualified from driving for 30 years, by Judge Seán Ó Donnabháin, in February 2014.

Speaking on behalf of the three-judge Court of Appeal last Friday, Mr Justice Garrett Sheehan said Casey’s sentence was ‘out of line with other decided cases’.

Mr Justice Sheehan said the sentencing judge ‘erred in holding that this was at the absolute apex’ of the dangerous driving scale, as had been submitted by Casey’s barrister, Thomas Creed SC.

Although ‘no two cases are the same’, the court considered eight dangerous driving cases which had reached an appeal court. In all but two of the eight cases, sentences of below five years were imposed.

Mr Justice Sheehan said the court wished to give careful consideration to the question of imposing a new sentence and the matter was put back to October 19th.

Mr Creed submitted an up to date victim impact report from the parents of Ms Johnston.

‘They feel Sean Casey has served enough time in prison to make amends for what he did,’ Mr Creed said. Referring to her victim impact statement, Mr Justice Sheehan said the generosity of spirit displayed by Ms Petford in such adversity was ‘a lesson to us all’.

The court did not take up the DPP’s invitation to set guidelines on dangerous driving cases in this particular case.

Moving to appeal his sentence last month, Mr Creed said his client always knew, ‘almost out of a sense of atonement’, that he was going to get a custodial sentence.

However, the sentencing judge put this case at ‘the very apex’ of dangerous driving causing death cases, and completely ignored the possibility for rehabilitation, Mr Creed said.

There was no evidence that Casey’s silver BMW was a ‘big powerful’ car, Mr Creed said. It may have been one of the least powerful BMWs available, and the same results could have been brought about in a one litre Ford Focus.

Mr Creed said the whole court had been influenced by a very touching and very sad victim impact statement from Ms Petford, who was left paralysed following the incident.

It was a palpably sad occasion and the judge seemed to put the case far higher up the scale than he would in a situation less fraught.

The judge seemed to have been influenced by such matters, Mr Creed said.

Counsel for the Director of Public Prosecutions, Lorcan Staines BL, said the devastating consequences that were visited on both families were forseeable and ‘unfortunately’ they fell at the feet of Casey in this case.

Mr Staines said a very large amount of alcohol had been consumed and more people than were legally allowed – five – were in the car at the time.

It seemed to be an automatic consequence that there would be a very serious collision travelling at that speed, Mr Staines said.

Other people had said Casey was at a stage of drunkeness that would not enable him to drive, Mr Staines said. The car keys came back to him because of a friend’s representations to the barmaid who had taken them.

Furthermore, Casey was experienced with vehicles because of his job. The family business was plant hire, the court heard.

He said dangerous driving causing death cases were difficult to balance, because they were not the result of intended actions.

It had been ‘very, very clearly signposted’ by the State, Oireachtas and Road Safety Authority that these were actions which cannot be condoned.

The DPP maintained that there was no demonstrated error in principle and it was open to the trial judge to do what he did, Mr Staines said.

The matter will return to court on October 19th.