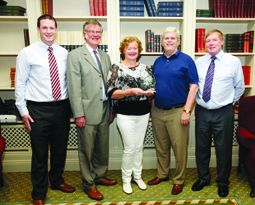 Veronica Stuart from Carrigaline has been named Cork Person of the Month to mark her work as teacher, promoter and expert in Irish lacemaking.(Photo: Tony O’Connell)

A CARRIGALINE woman, who presented Queen Elizabeth with a sample of Irish lace, has been named the Cork Person of the Month and will go forward to the national awards for 2016.

Veronica Stuart was nominated for the award by the Traditional Lace Makers of Ireland, to mark her contribution as a teacher, mentor and curator of the craft of lacemaking.

Her outstanding achievements include the revival of the ‘queen’ of Irish laces – Youghal Needlepoint. More recently, Veronica was invited to provide a piece of Irish lace, which was presented to Queen Elizabeth during her visit to Cork.

Veronica Stuart has received many international awards for her work, including a Gold Medal from Italy, for reviving Youghal Lace and another Gold Medal for leading the team who researched the history of lace in West Cork, resulting in the publication of the West Cork Lace Trail. As a teacher of lace making, her students have also won many National Craft Council awards.

Veronica is now ensuring the continuity of the craft of traditional lace making, by organising a FETAC qualification in lace making at Carrigaline Community School. She currently has 200 students, of all ages, from Cork City and County attending her lace-making classes. She wants to maintain recognised standards in lace making and increase the numbers of teachers in the sector.

For instance, her display of Georgian doors worked in Irish laces for the International Lace Conference in Adelaide last July, was voted the most popular display at the conference.

Veronica’s name will now go forward, together with the other Persons of Month chosen this year, for possible selection as Cork Person of the Year at a Gala Awards Lunch on Jan 15th (2016) next.