DRIVING the Audi Q4 e-tron is an almost meditative experience. Especially if you’re not in a hurry anywhere. Not that it can’t do hurry: if you need it, it most certainly can, its 300hp offering a sub-6.3s sprint.

But for a getting-to-know-you wander up through the lower Wicklow hills, it was serene.

The latest of the growing Audi range of electric cars, the Q4 e-tron adds yet another Audi SUV to an already segments-spanning range. Two more, in fact, because there’s a Sportback version which curves the rear of the roof some more. I don’t know why they felt the need for that, but it’s what they do these days.

Audi seem to be in a state of flux for naming their electric cars. They started off with simply the e-tron, a medium-large SUV which also begat a Sportback variant. Going with a non-capitalised name is generally problematical, as Kia found with their cee’d that finally grew up to Ceed. A properly capitalised name stands out in print, and has a better recognition signature.

Audi then went with e-tron GT for their sports coupe addition to the e-family, and now have relegated e-tron to a suffix for the newest car. I think they’re undecided. Not a good idea when somebody has to say what they’re driving and then it needs complicated explanation.

There’s a bit of a bird of prey about the front, the beady look of the headlights in the strong contrast closed grille of the white review car. 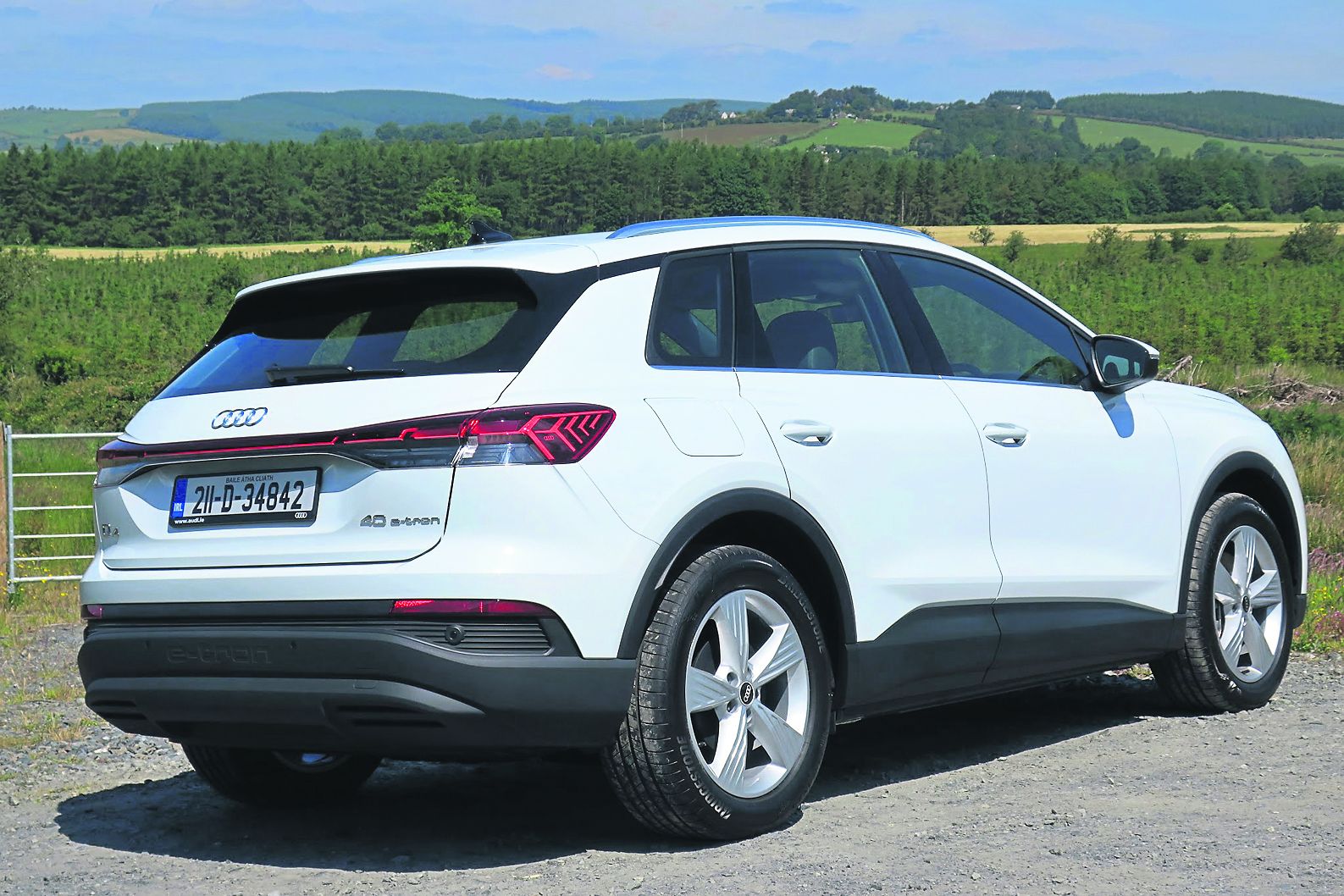 The profile is quite plain but the contrasting black of the sill protectors provided a lean and hungry look that might not be so apparent on a darker paint job. There’s a clean execution of the rear, with the e-tron trademark full-width lighting rig. Enough styling to look smart, not too much that it will date quickly.

I know from talking directly with designers in the past that they have reasons for every stroke and stripe of their pencils (or in these days, each mouse click on their CAD), and I suspect one could wax long and detailed on the styling of the Q4 e-tron. But suffice to say, it looks crisp and good.

The inside is what we’d expect from any modern Audi, adding the high-premium epithet to the crisp and good.

The information on the digital main screen is white on black clear, with strong colours where they appear on the graphics, and a fine integrated central screen where the touch controls are practical. The climate is managed by piano key switches.

It’s a roomy car, set between the Q3 and Q5, logically enough. All the comfort stuff, and a decent boot for the road trip. 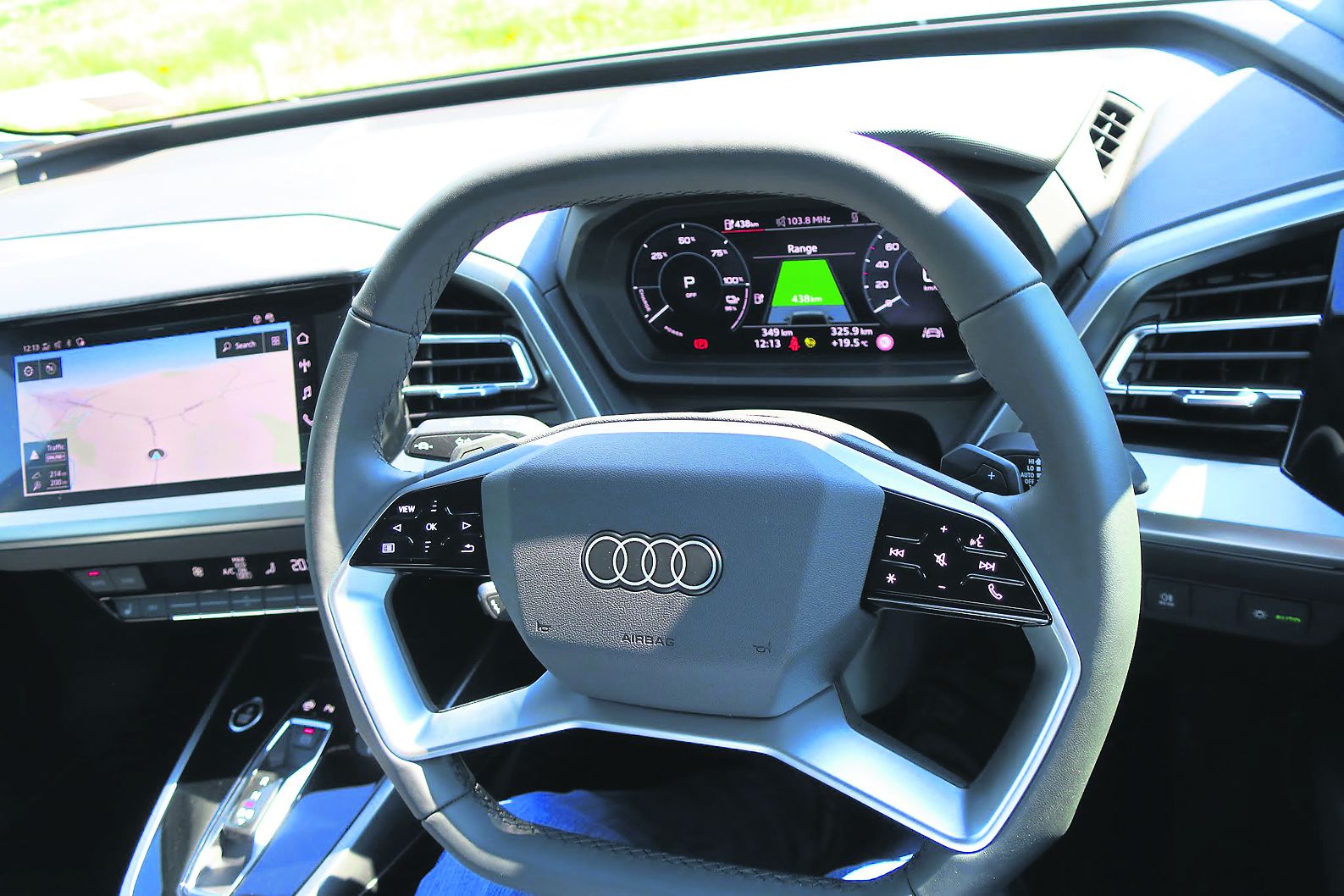 Depending on whether you are a road trip kind of owner, you can choose from two batteries, offering 330 and 511 kilometres of range respectively. Audi Ireland expect that the larger one will be the main choice here. In either case the car comes with very fast charging capability at a suitable facility.

That meditative thoughtline I started with came from being in an exceptionally quiet space as I drove the car on an introductory mix of motorway and mountain roads. I’m used to the quietness of electric cars, but the road and wind noise in the Q4 e-tron are mentionable … for their almost complete absence. There’s some very good insulation and aerodynamics here.

It hardly needs saying that every driver assist weapon in the business is part of the Q4 e-tron arsenal. Including an optional augmented reality head-up display that I have experienced in other Volkswagen Group models, and which is impressive.

The car is rear drive, and this allows for a turning circle that is way tighter than in comparable front-engined vehicle.

That probably makes it a very easy car to manage in tight city streets and fidgeting traffic. Perhaps, though, in those spaces without the serenity that otherwise marks out this one.

What I like: The narrowed price gap between a standard EV and something significantly posher.