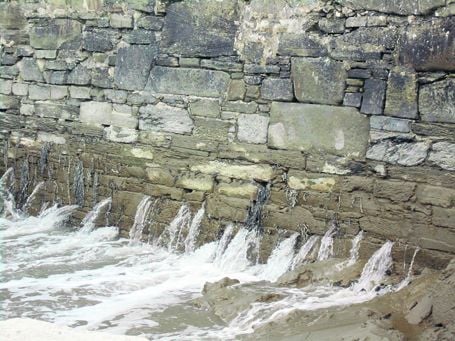 A 175-year-old pier on Cape Clear island has what looks like a river running through it.

Duffy’s Pier – the portion of the pier that was built in the 1840s and is the closest to land – was badly damaged in the storms of January 2014 and the island community, through a Department of Marine application, was granted €900,000 to have it upgraded.

However, a separate, but adjacent, €4m project is putting the structure under pressure. On Monday, March 23rd, work started on the installation of steel barriers that will dry out the part of the harbour where a new storm gate is to be installed.

Islander Séamus Ó Drisceoil confirmed that the works would temporarily close off the inner harbour.

But it is also having the remarkable effect of causing the tide to gush through the most vulnerable part of Duffy’s Pier, as an alternative route into the inner basin area.

Mr Ó Drisceoil said the phenomenon is ‘equivalent to a small river flowing through the already damaged stonework’ and, if it continues to happen four times a day, every day, until the storm gate is installed sometime over the next two weeks, it could ‘create a scouring effect.’

While the sight is impressive, Mr Ó Drisceoil said he was worried that it would threaten the stability of the oldest section of the pier. And he confirmed that the Government had announced a €2m package for works to the North Harbour pier, works that will include €900,000 for the restoration of Duffy’s Pier.

Mr Ó Drisceoil said the remedial works to Duffy’s Pier ‘will not come a moment too soon.’