A visit by the Minister for Education, Jan O'Sullivan, TD, to Cahermore National School in Allihies - the furthest school from Dublin - served to highlight the problem with pupil/teacher ratios. 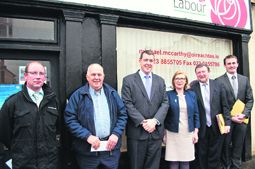 A VISIT by the Minister for Education, Jan O’Sullivan, TD, to Cahermore National School in Allihies – the furthest school from Dublin – served to highlight the problem with pupil/teacher ratios.

The minister was in West Cork last Thursday, February 12th, to officiate at the launch of the Skibbereen Community School building project but she also met with representatives of a number of small schools and she visited Allihies.

So, when the minister announced on Tuesday of this week that the Government has agreed to the implementation of two new policies to better support the sustainability of small schools, particularly those in isolated areas, it was warmly welcomed by the Labour TD, Michael McCarthy, Fine Gael TD, Noel Harrington, and Finbarr Harrington, chairman of the Cork Community and Voluntary Forum, all of whom accompanied her on the visit.

According to Mr Harrington, ‘cuts implemented in two previous budgets meant that the number of pupils needed to retain teachers was increased and this policy had a drastic knock-on effect on schools throughout the country.

‘The reversal of these cuts would be a fantastic development,’ said Mr Harrington. ‘Vibrant primary schools are key factors in sustaining rural communities and what the minister is suggesting is a pragmatic solution.’

The Labour TD explained that the Government’s new policy approach involves two key elements including improved changes to the staffing schedule for some small schools, and a voluntary protocol for future sustainability for one teacher schools with reducing enrolments.

Mr McCarthy said the proposed policies ‘recognise the challenges faced by very small schools and will provide rural communities with security about the future of their small schools.’

The Labour TD also claimed that the Value for Money and policy review of small schools – which was commissioned by former Tánaiste and minister, Mary Coughlan, in 2010 – ‘will not be accepted and nor will it be implemented by this Government.’

Mr McCarthy thanked the minister for meeting a small delegation of principals during her day in West Cork, all of whom ‘spoke passionately about the vibrant and vital role these schools play in their local communities,’ and he added: ‘I am delighted that Minister O’Sullivan has taken on board the concerns of small rural schools.’