Bridget Healy and Philomena Flynn examine the bottle they found on Long Strand. 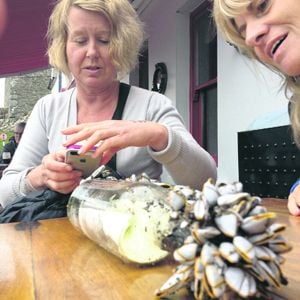 Bridget Healy and Philomena Flynn examine the bottle they found on Long Strand.

BRIDGET Healy must have a knack for finding messages in a bottle. This is the second time in recent years that Bridget, who works at the Lettercollum Kitchen Project in Clonakilty, has successfully retrieved messages in bottles on Long Strand beach.

This time however, she was out walking with her friends Caitlin Ruth and Philomena Flynn, on the beach on a blustery summer’s day on Monday, June 29th.

‘We had walked about halfway when the weather turned worse and on the way back we noticed a pallet had been washed up on the beach with loads of barnacles on it. We saw a dog belonging to a couple sniffing at it and we went over to see what it was and saw the bottle,’ said Bridget, speaking to The Southern Star.

‘I had found a message in a bottle before which was sent from an Irish guy who had been dumped by his girlfriend, but this one was way cooler as it had barnacles attached to it and it seemed like there was a lot of paper in the bottle.’

It was only while they were outside Bushe’s Bar in Baltimore later that day that they attempted to retrieve the messages and they managed to get the cork out and got the letter halfway out. In the end Bridget had to smash it, but not before they took some pictures of it in its glorious state.

‘Philomena then read out the three pages that were written and a lot of it didn’t make any sense, but there was an email address attached and Caitlin emailed the sender that night and she got a reply from Ernie LeMay, who said he sent it over a year ago to the month when he was out fishing with his friends off the Florida coast. I don’t think he really remembers what he wrote, but he was thrilled to hear that we found his message.’ Ernie subsequently sent Caitlin pictures of him and his friends who were fishing with him on the day he wrote the messages in the bottle.

‘It was a very funny story and the way it worked out on such a miserable day and it’s mad that the bottle survived the journey and that the paper was completely dry on the inside.’

Bridget and her friends plan to send Ernie pictures of them on Sands Cove with hats emblazoned with ‘Finking of You’ after Ernie told them that he and his friends had been on a ‘frinking trip’ – a term they used for their time on the boat fishing and drinking.