Part of the convent site which was sold before Christmas 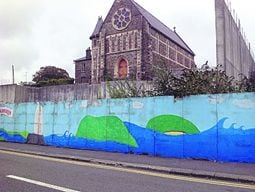 Part of the convent site which was sold before Christmas

THE sale of the former convent site in Skibbereen could be the start of a major development for the town.

Ballineen native, property developer Bernard Hennessy has confirmed to The Southern Star that he purchased the site for €500,000 before Christmas, and is considering a number of options for its future.

Hennessy has successfully purchased and completed other ‘ghost’ property developments, including the Barleycove Beach Hotel, which he bought 16 years ago.

He believes the Skibbereen project has a lot of potential and has also pledged to restore the convent chapel, main building and school to their ‘former splendour’.

And he has extended an invitation to interested parties who may wish to invest in the site, to contact him directly.

At present, the site has planning permission for a multi-million euro development that includes a 50-apartment complex, a cinema, and an underground car park, as well as the preservation of the old convent school and chapel for commercial and residential use.

Proceeding with the original development plan is, however, contingent on planning being further extended.

Alternatively, Mr Hennessy said: ‘There are so many possibilities about what could be achieved at this prime site in Skibbereen and I am looking forward to a fresh exploration of each part of the site.’

In an unusual move, Mr Hennessy asked that his private mobile number and email address be printed in The Southern Star because he said he would welcome ‘solid, commercial proposals from interested parties who may wish to investing in the property.’

He can be contacted on: 086 8287597 and his email address is: [email protected] ‘What captured my imagination,’ said Mr Hennessy, who closed the deal with the estate agent Michael Galvin of DNG in Bandon just before Christmas, ‘was the beauty of the three buildings: the chapel, convent and the school and, of course, the fact that it is a prime location. It is my intention,’ he said, ‘to have them restored to their former splendour.’

As another example that property sales in West Cork appear to be improving again, Drishane Point, a coastal headland on 30 acres, sold recently for €1.35m, while Glengarriff Castle is believed to have been sold to a local buyer.