Suzanne Lyle, Arts Council of Northern Ireland, with Lord Mayor of Belfast, Cllr Arder Carson, and artist Alex Pentek at the Forget Me Not sculpture. 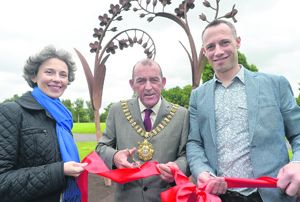 Suzanne Lyle, Arts Council of Northern Ireland, with Lord Mayor of Belfast, Cllr Arder Carson, and artist Alex Pentek at the Forget Me Not sculpture.

A WEST Cork artist has created a sculpture that was unveiled in Belfast recently.

The ‘Forget Me Not’ sculpture, made from bronze and coated steel, is the creation of Alex Pentek, who is originally from Bantry.

The sculpture was unveiled in Belfast’s City Cemetery to honour the contribution and diversity of the people buried there. The artist, Pentek, created the project after engaging with local residents.

Roisin McDonough, chief executive of the Arts Council of Northern Ireland said they were delighted to be part of the unveiling of the new artwork in Belfast which, she described as ‘this historic and peaceful place which symbolises the journey of people from the past and present throughout the city’.

Belfast City Council undertook the project in co-operation with The Friends of Falls Park, with the intention of creating a shared symbol of peace in the historic cemetery.

The project was supported by the ‘Building Peace through the Arts – Re-Imagining Communities’ programme, which promotes positive relations and a shared future between traditionally divided communities, through art.

Lord Mayor of Belfast, Cllr Arder Carson said the sculpture was designed to promote understanding of, and respect for, the diverse communities that have contributed to the growth and development of the city.