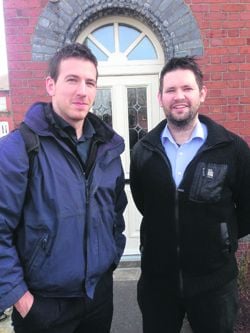 TWO Bandon brothers have published a fantasy novel about a woman being accused of murder.

Despite being turned down by several book-publishing agents, James and Brendan Dwyer from Bandon weren’t deterred. They ended up going it alone and set up their own publishing label for their debut science fiction novel, Cult Fiction.

The book, which takes its theme from computer games, is based in Municipal City – ‘the only place on earth where you can be anyone. Anyone from your favourite movies, books, tv shows, comics, video games or any cult media you can imagine. This is not virtual reality. This is real,’ says an online blurb for the book.

It adds: ‘Tina Lockhart arrives at the City to do exactly that, and is willing to pay any price to get in, willing to take the Elixir drug she needs just to breathe the air, and willing to kill, and risk being killed, just to survive.’

Brendan Dwyer told the Southern Star this week that the brothers began writing the novel back in January 2013. ‘We finished it that summer and began approaching agents about a possible publishing deal. But after spending a while pushing it, we decided to set up our own label, Paused Books,’ he said.

‘So far we have distributed nearly 600 paperback and eBook copies in the past seven months, and we were also successful in getting Easons to distribute it both at home and to the UK,’ said Brendan.

The two Dwyer brothers launched Cult Fiction at Comicon, an annual Comic convention in Dublin, last October and they won the Geek Ireland Best Novel for 2014, where they were up against some serious competition.

‘We co-ordinated the whole process by email as I live in Dublin and James is in Midleton, and it worked surprisingly well. It’s basically a science fiction novel based on the nineties and set in the future. It’s aimed at the 16bit generation with loads of nineties references throughout the book. It is aimed at a wider audience and would suit general science fiction readers.’

Not one to rest their pens, they have already released their second book, ‘Fireborn’, digitally. It takes a different tack from Cult Fiction – and has been described as an ‘epic fantasy page-turner’.

Written by James, a former world champion in Taekwon-do, the book follows the lives of four fire-worshipping warriors as they fight to save the world of power from turning to ice.

‘We will be launching the hard copy of ‘Fireborn’ at Comicon this August, and we will hopefully start working on a sequel to ‘Cult Fiction’ soon enough,’ said Brendan.