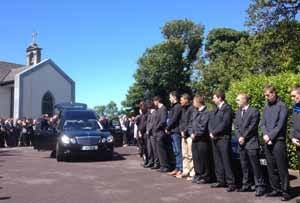 CIT student colleagues of Barry Davis Ryan form a guard of honour at the funeral of Barry Ryan in Baltimore on Sunday.

AS the search continued this (Sunday) morning for the body of one of his sons, the funeral mass was taking place at the Sacred Heart Church in Rath, Baltimore, of Barry Ryan snr.

He, along with his son, Barry Davis Ryan, both from Lackahane, Baltimore, and Niamh O’Connor from Blossomgrove, Glanmire, were drowned just below the Beacon at the mouth of Baltimore harbour just after 5.30pm last Tuesday evening. The bodies of Barry snr and his son’s girlfriend, Niamh, were recovered soon afterwards by Baltimore lifeboat personnel who were on the scene within minutes, but the search still continues, five days later, for the body of 20-year-old Barry Davis Ryan despite some mixed weather.

There was an overflow congregation at the church in Rath again this morning for the funeral of Barry Ryan (51), originally from Foxrock in Dublin and a son of Arthur Ryan, who founded Penneys, and mother Rose. He is survived by his partner Ann Davis, a native of Baltimore, and children Arthur and Charlotte; sisters Alison and Jessica and brothers Colin and Arthur, as well as other relatives and a wide circle of friends. Burial took place in Tullagh Cemetery, Baltimore, after requiem mass.

On Saturday, the funeral of Niamh O’Connor (20) took place at Church of the Sacred Heart, Glounthaune, where there was a huge attendance, including colleagues from Penneys who formed a guard of honour as her remains were taken to St Catherine’s Cemetery, Kilcully, for burial. Niamh is survived by her parents Paul and Catherine, younger sister Clodagh and a large extended family.