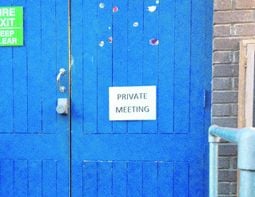 The sign on the door of Monday night’s meeting.

THERE has been a change of leadership of Ballydehob Community Council.

Former chairman Billy O’Regan stepped down at a council meeting on Monday night and Patrick Murphy was elected as its new leader. Mr Murphy confirmed his election to The Southern Star, but had ‘no comment’ on the changes.

An estimated 20 members of the public sought admittance to the meeting at Ballydehob Community Hall and chairman James O’Neill – who is director of services with Muintir na Tire, an organisation that governs community councils nationwide – accommodated them on the condition that they ‘observe’ and not interrupt the business of the meeting.

Mr O’Neill, who also chaired the AGM that was held on April 13th, asked to ‘acknowledge that they were very respectful and it meant the business of the meeting was carried out in a timely manner.’

He added that members of the public were allowed to make their observations and ‘they were of the opinion that it was in the best interests of Ballydehob Community Council they would go forward in a unified way. It was also agreed that the previous members of the community council would be accommodated to return to the council if they so wished.’

Mr O’Neill noted that the community council’s purchase of the former AIB Bank in the village was ‘a great achievement’ and he applauded the fact that the council is on schedule to have it paid back within a number of years.

‘The council’s success with this project tells me this is a very proactive community,’ said Mr O’Neill, ‘and I wish them well with their endeavour.’

The Munitir na Tire representative told The Southern Star it was agreed that a public meeting would take place soon, at which details of the feasibility study for the former bank would be put on display and public submissions sought.

Mr O’Neill made the observation: ‘Community groups tend to spend a lot of time focused on their next project, but I believe it is imperative to take time out and celebrate what they achieve in their voluntary capacity, and to celebrate that once a year.’

Mr O’Neill commented on the description of Ballydehob Community Council ‘facing chaos’. He said: ‘Having chaired both meetings, I can confirm that this is not a community council facing chaos. This is a community that is passionate about its sense of place.’