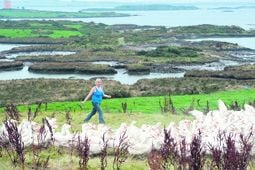 Skeaghanore Duck Farm was presented with the Best Artisan award at the Blas na hEireann Irish Food Awards in Dingle. Helena is seen with her ducks on the farm.

FOR Skeaghanore West Cork Duck, a company based in Ballydehob, good news comes in threes.

The West Cork company has been presented with a prestigious food award. It is in the final stages of a major re-development. And it has been selected as part of the Super Valu food academy.

Helena Hickey, together with her husband, Eugene, and their children – Daniel, Clara, Lisa, Joseph and Eoghan – were in Dublin recently to receive the Irish Food Writers’ Guild Award.

‘We were thrilled to be named as one of just seven food producers in the country to be honoured by the Irish Food Writers’ Guild,’ Helena said.

The organisation honours food producers who demonstrate the highest standards, impeccable quality, and an unwavering dedication, devotion and commitment to Irish food.

‘We see it as recognition for all the hard work that has gone into building the brand and the approach we have consistently taken in developing a quality product,’ she said.

Last year, the Department of the Environment, Community and Local Government sanctioned West Cork Development Partnership Ltd to approve funding for the company in the sum of €200,000 under the Adding Value to Agricultural and Forestry products measure of the Rural Development Programme.

Helena confirmed that the investment in building the new processing facility on their land at Skeaghanore in Ballydehob will pave the way for an expansion of the business and lead to the creation of three more jobs in the future.

‘The builders, West Cork Engineering, are nearing completion so we hope to be ready to go into full scale production by the end of May,’ Helena told The Southern Star.

‘We have come a long way since the company was first established in 1994,’ said Helena, ‘but it was important for us to grow and develop at a sustainable rate. In fact,’ she added, ‘you could say it grew with the family.’

It is this company’s attention to detail – as well as steady sales both locally and nationally and a growing media profile – that brought the company to the attention of Super Valu.

‘We are delighted that we have been chosen to be a part of their Food Academy and we are hoping to see our products on the shelves of 13 Super Valu stores in April.

‘In that regard,’ she added, ‘we would to acknowledge the ongoing support we have received over the years from John Field in Skibbereen, Eugene Scally in Clonakilty and Jim O’Keeffe in Bantry, as well as all of our other loyal customers, and our tremendously hard working staff.’