The souterrain which was discovered recently at Bonane 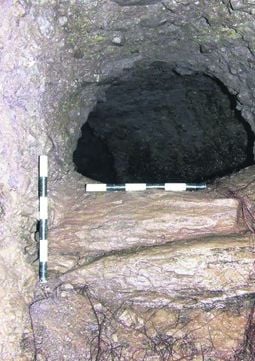 The souterrain which was discovered recently at Bonane.

A ROAD-widening project on the far side of Bonane, between Glengarriff and Kenmare, in the Caha mountain range, will continue despite the discovery of an underground passage that is believed to be over 1,000 years old.

The discovery of the souterrain in recent weeks, which is an ancient underground gallery, is a significant find, experts say, as such discoveries are relatively rare.

One of the workers operating a JCB made the startling find last Tuesday week, and work immediately ceased until archaeologists were called in to examine the site, last week.

‘This wasn’t a huge project and it was just to widen a 1.6km tourist route so that camper vans could be accommodated.

‘The project was undertaken by Kerry County Council and the National Roads Authority (NRA) and we were contacted immediately when it was discovered,’ said James Eoghan, senior archaeologist with the NRA, speaking to The Southern Star this week.

‘Souterrains are underground structures and are hard to find in a traditional sense because of them being underground, but can tend to be found as a result of construction in some cases. These underground passages are tunnelled normally by digging a trench and this particular one is unusual and unique to this area as it’s tunnelled almost into rock.’

They were usually a place for refuge from attack and were also used as places of storage for perishable and valuable items.

‘When I arrived on site the construction has ceased and the opening that was exposed had been blocked by slabs for safety,’ the archaeologist exlained. ‘I worked my way into the entrance and saw two chambers and it was obvious to me that this was an archaeological find.’

The ongoing roadworks did not disturb the underground passage and because it is running away from the area, construction of the road-widening project will continue.

‘We are liaising with the National Monuments Service about this discovery and we will record everything and make sure we are on site when work commences. The objective is to preserve this souterrain and the entrance will have to be sealed up and the location of it will be known and mapped,’ said Mr Eoghan.