When cancer hits a household, everything changes in an instant. But the generosity of the people of West Cork means the tireless committee behind Bantry Hospice can provide help where, and when, it’s needed most.

THE people of West Cork, and further afield, have raised over €1m for Bantry Hospice since 2007. Comprising a two-bed unit, with a range of support services, its voluntary committee want to highlight the various ways they spend these much appreciated and essential funds.

Outside of the palliative care beds, they help take the fear out of caring at home for a loved one with cancer by providing equipment and crucial night nursing.

They also operate a discreet financial support fund if a family’s finances are hit by a cancer diagnosis which has so far helped over 100 people. The list goes on.

Treasurer Pat Morrissey has been involved in Bantry Hospice Project since the very start and it was through the tragic loss of his son Conor at the age of 28 that he saw first hand the importance of palliative care. A walk in memory of Conor was organised  in 2007 which raised an incredible €36,000 for Marymount Hospice.

Mrs Brigitte Wagner-Halswick, owner of Rowa Pharmaceuticals Ltd, Bantry was asked to present the cheque to Marymount and increased the donation to €40,000.

However, in presenting it to then CEO Kevin O’Dwyer, she quipped that it would be the first and last cheque from Bantry, and the Bantry Hospice Project was formed.

The feeling was that Marymount, while providing an incredible service, was a distance away, and something was needed locally.

And so a major fundraising drive was launched, supported by all sectors of the community, which generated €231,000 and resulted in the Hospice being opened in February 2010, and officially opened by Graham Norton that August. 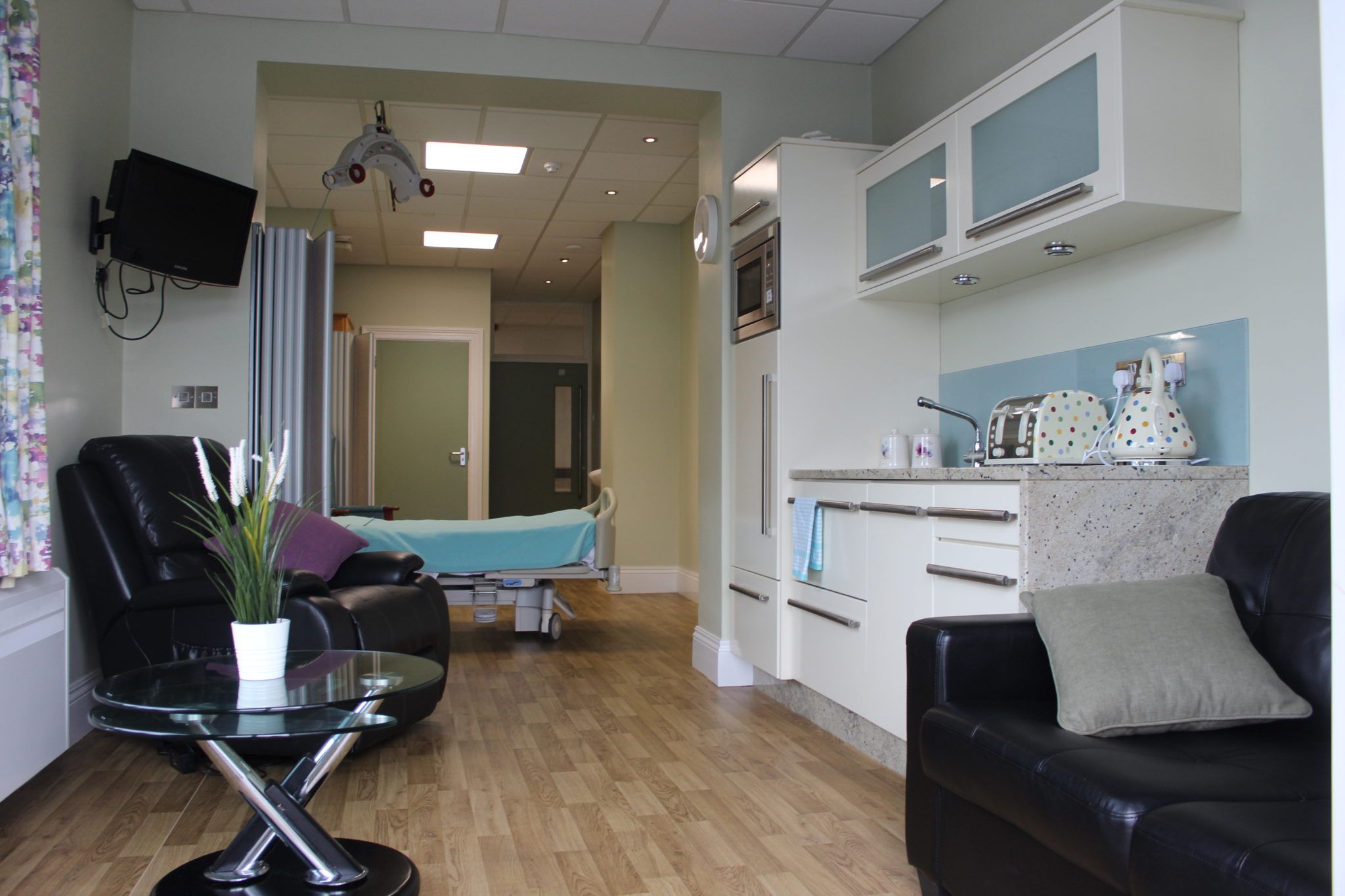 The hospice units have a homely and comfortable vibe and are designed with a kitchen and sitting area to allow families spend precious time together. (Photo: Denis Connolly)

As Pat says, outside of  supporting the palliative care centre, their ultimate focus is to get  the  money to where it’s needed most.

Valued committee members who have passed are Eugene Cronin and Dr. Denis Cotter.

Rowa is the main Hospice sponsor and covers all administrative costs for the committee as well as providing other supports through their staff.

Mrs Wagner-Halswick’s company celebrated 60 years in 2019 and the Hospice Project was their chosen charity raising much needed funds. Rowa also organised a breakfast event with Graham Norton which raised €5,000 for the Hospice.

The committee explain how the Irish Cancer Society covers home night nursing for up to 12 nights per patient, which they supplement. They also help with home care equipment to make life easier for the patient to be cared for at home; a home-sitting service; training for palliative care nurses and contribute to vehicle costs for the care team.

West Cork’s palliative care team also have access to a social worker and Bantry Hospice Project contribute €15,000 to Marymount for this salary.

However, one of the most essential services they provide is a Support Fund which has so far helped 100 families and paid out €75,000.

Joe Keane, Head of Operations for Rowa,  points out that when cancer visits a home, everything is turned upside down in an instant including the household’s finances.  And Claire said they last thing a family wants to be worrying about at such a time, is money.

‘We’ve helped with things like a fill of oil, food and Christmas expenses. And it’s all done confidentially through our social worker,’ said Joe.

All members stress time and time again the generosity and amazing good will of the public. Claire and Joe  highlight a 12-year old girl called Kate Manning from Coomhola NS who raised €1,000 by carol singing for four hours; and 5th class in Gael Scoil Bheantrai who raised €100 from a bake sale. These simple gestures mean they can make a big difference with Joe recalling another incident where a teenage girl who had a leg amputated didn’t have funding to avail of reflexology.

‘We were able to cover 10 sessions for her at a cost of around €40 a session and the relief it gave her was incredible.’

Bantry native and GAA stalwart Terry O’Neill spent six weeks in Bantry Hospice before his death and his brothers Barry and Cornie insist he couldn’t have been in a better place. Cornie says: ‘It was like a home from home for him; it was extraordinary. We could visit him any time and come and go as we pleased which was very convenient and meant we didn’t lose any valuable time with him and the nursing staff were fantastic.’

The second room was opened in 2018 and the focus for 2020 is to develop the crucial support fund.

Joe added: ‘There’s very few families that are not hit in some way by cancer and it’s the public that do the vast majority of our fundraising.’

Pat summed it up perfectly by saying: ‘We could not do any of this without the support of West Cork. The more people who help us, the more  we can help.’