The Beara Way is a beautiful drive on a summer Sunday.

Whether it’s family visiting time, an easy mosey after a late night or an exploratory adventure, the Sunday drive is an institution in the weekly calendar. Continue to coast the hedge laden lanes and linger along undiscovered byways with this great West Cork Sunday drive.

Sundays tick slower on the roads. Traditional day for the dawdle-drive, more than the usual goes. Car seats lean back a few extra degrees. Indicator use may be less frequent. Speeds are more of the sminky shorts Tommy variety.

Steer ungracefully away from the petrol station with a compulsory cone. Destination still undecided.

Create or join the traffic convoys caused by view pausing. Discard cone tissue due to paper nibble wariness. Later lament premature discarding. Curse the dairy end drip promising to switch to cornetto next time, but you will forget or try to beat the drip and repeat again. And again.

Sunday diving is more about “where are we now” rather than “here we are”. The going rather than the getting. West Cork is the perfect location for non-GPS, loose, lose-yourself drives. Though the route suggested here is straightforward in its own curve, feel free at any stage to utter the Sunday chestnut “let’s see what’s down this way” and find off track grass-centred beauts to who knows where.

A Bit of Beara 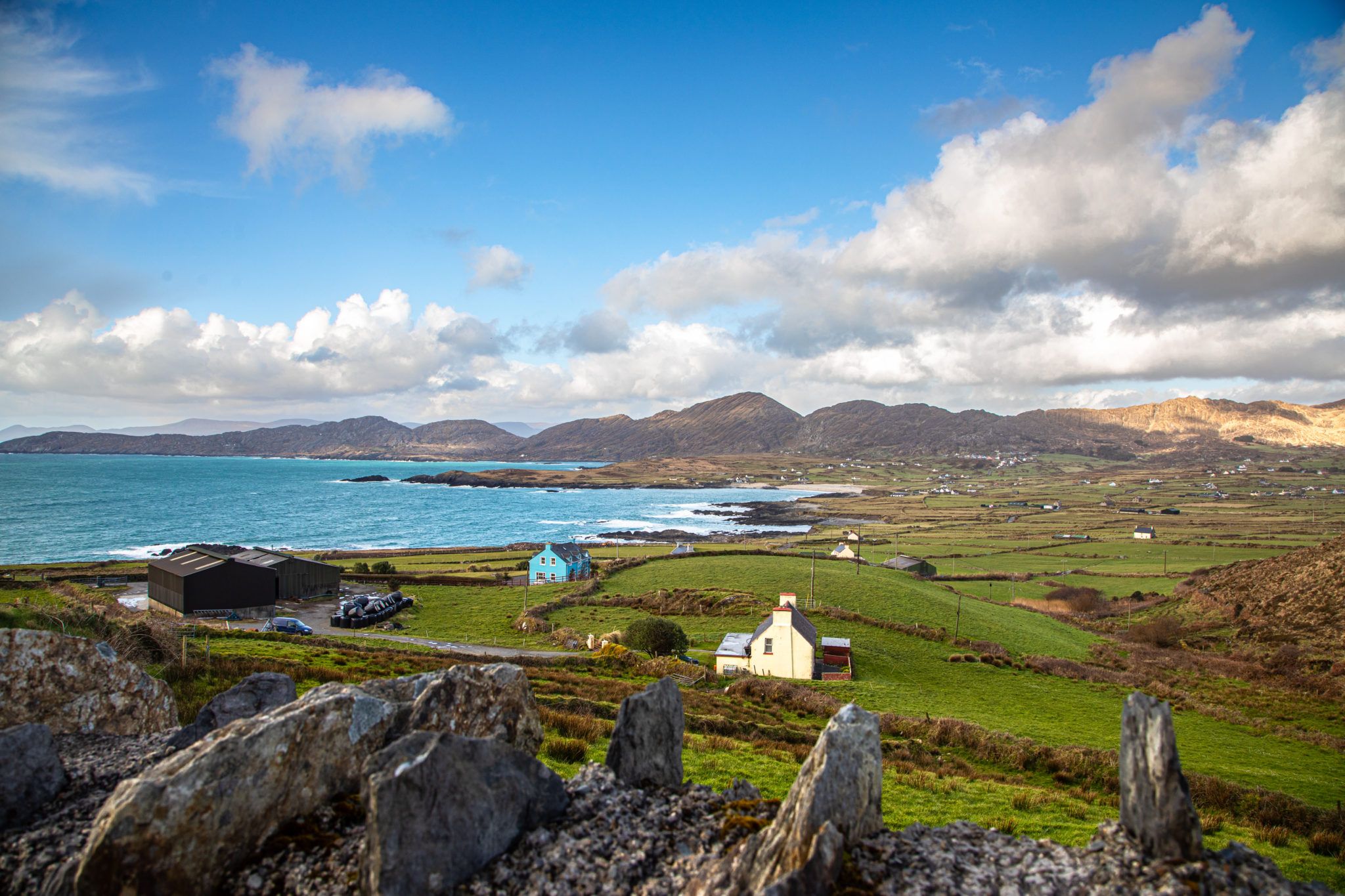 View of the Allihies coastline on the Beara peninsula.

Climb uphill away from Castletownbere west towards Allihies. The first long lingering happens less than five miles from the town. The convoy (though traffic rarely builds up on this peninsula) can quickly disperse at a layby by Gour where a coffee van may already await your stop.

A few squiggle corners from here is the tucked away entrance to Dzogchen Beara, a Buddhist Retreat centre.

Colourful prayer flags spin prayers to greedy winds. Follow the lane to the accommodation area and nirvana café end. Visitors are welcome to explore the grounds where a silent meditation garden leans over the Atlantic and Ireland’s first Tibetan Buddhist Temple nears completion. 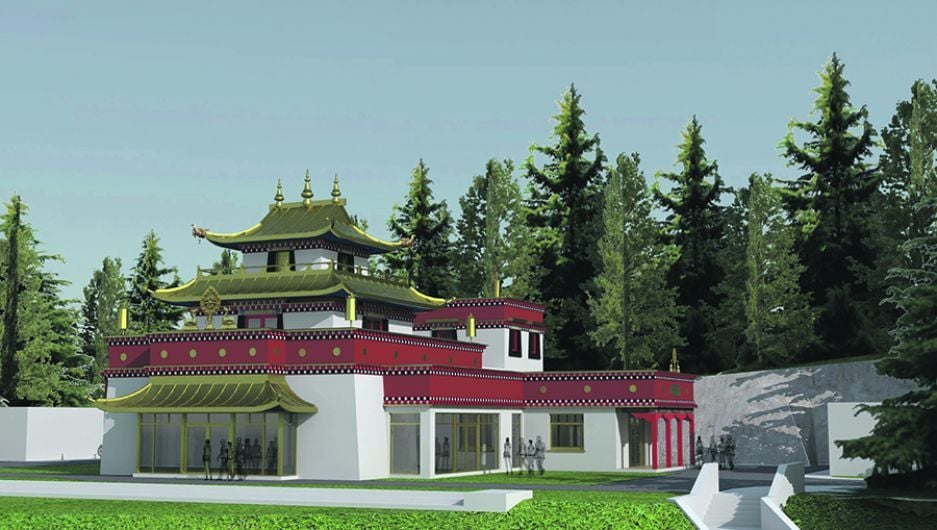 An artists impression of the temple at Dzogchen Beara.

The meditation room is often open to sit and gulp the views, framed sea largesse with passing trawlers a handy focus to keep a light gaze alit. Concentrate on this Now.

Something extra special about this location is the height you watch the sea from and a lack of other habitation. Usually in West Cork you are hunkered between inlets or further fields with houses dotted about but here the sea is beyond and far below.

Spin on past Dzogchen towards Allihies to another mandatory stop at nearby Dooneen Point. Memorable pit-stops are a vital part of any great West Cork Sunday drive especially when exiting from quiet (ish) car-womb space to surround sound.

Although the mines closed by the end of the 19th century, later attempts were made to reopen the seams. Mining engineers, sleeves rolled, smile across the road to a once thriving workplace, now tottering, barely-there ruins.

However, mind the prosecco indulgences here. You are never far from the edge in Beara and this is cliff-rimmed, trimmed by winds.

Copper mining in this area began in 1812, initiated by local landlord John Puxley. A turquoise cliff streak pointed him to investigate copper possibilities. And so colour paved the way to colourless underground.

It is a rare main road in Ireland without central markings but here you continue to glide along trusting your judgement without white line constraints. Enjoy the hug of yellow dashes by the ditches.

Stretching over the driver’s right shoulder land soon falls away revealing itself to more sea stretches and the golden flash of Ballydonegan beach by Allihies. Curl into this great West Cork village and another pit-stop at the excellent Copper Mine museum. 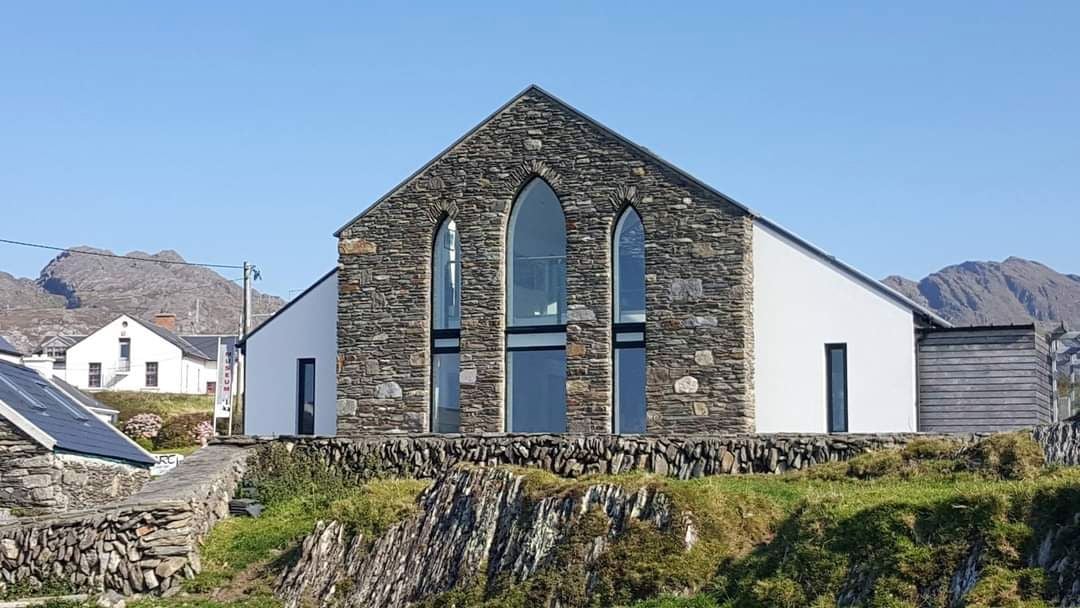 Allihies Copper Mine Museum is worth one of your pitstops along the way.

An aerial view of Allihies resembles a colourful dash in the hillside, its very own mining seam, a living vein of village.

Carry on towards Eyeries, banks of rock surround you, sometimes thin lines of growth eke their way out to air.

Up, up, up into the grey mounds then swing out of a corner and down, down, down towards the sea. Mind the deceptive wall that turns out not to be the end of it all.

Whether sea or mountain-face, each corner halts you to a picture pose. You are grateful for a smartphone camera, back in ye olden days film rolls meant photos were finite  —  each corner would be a dilemma, whether to click or nae.

The hill climb toward Cod’s Head before the downturn to Urhan is a stop, start, stop, start stretch of the pure spectacular. You drive a few metres before you need to stop for another camera shot but smartphones lack enough smart and heart to capture this wide open greatness. You eventually give up trying to replicate the view and just stop and pause in the view. Concentrate on this Now.

Before Urhan, a plaque indicates a stretch of the Beara cycle way is dubbed the James O’Sullivan mile, great grandfather to 2001 U.S. Ambassador Michael J. Sullivan.

The last section of this great West Cork Sunday drive takes you to multi-coloured Eyeries and just 5km beyond to the Hag of Beara.

‘Layer upon layer, the stone clasps around me, and my eyes fall to where the sea and mountains meet’ - Leanne O’Sullivan

The Cailleach goddess turned to stone. Leave a coin, shell or other offering to join the others here. Lean against her wisdom and watch the boats return to Ballycrovane Harbour.  And drive home. Slowly.

Slow goes a great West Cork Sunday drive, speed is not the object. An unhurried meander is the commandment of this day.