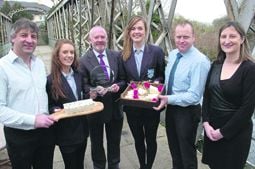 At the awards, held on Monday in The West Cork Hotel in Skibbereen, Fresh Handmade Soaps caught the judges’ attention with their beautifully crafted unique range of SLS-free soaps made from natural essential oils, specifically for sensitive skin.

They will now go on to represent The West Cork LEO at the national Student Enterprise Finals in Croke Park on April 22nd.

‘Little Treats’ from St Brogan’s College in Bandon took first place overall in the intermediate category, and will also represent the region with their artisan baking products in Croke Park.

Speaking of their win, Hannah Kelly, managing director of Fresh Handmade Soaps said they were thrilled to go forward to represent West Cork in Dublin in April.

‘I hope we can go on to do our region proud. Until then we have quite a bit of work to do as we work on getting our website up and running to allow us to trade online,’ she said.

Ruairí Coughlan from Clonakilty Community College also received a special recognition award for Entrepreneur of the Future for his team’s business Rhutastic.

Speaking at the final of the West Cork Student Enterprise Awards, Michel Hanley, Head of Enterprise, Local Enterprise Office, North and West Cork said the awards were about encouraging up and coming entrepreneurs and giving them a taste of setting up in business. They may even create employment in the region in years to come. ‘All of the participating schools put in such a fantastic effort and I would like to congratulate all of them for their dedication and hard work,’ he said.

Christine McCarthy, schools programme co-ordinator for West Cork, said the twelve participating schools had done themselves proud. ‘Our judges had a tough task in choosing a winner but we believe that the students of Colaiste Pobail Bheanntraí and St Brogan’s have come up with very promising enterprises which have the ability to flourish outside of the Enterprise Programme,’ she said.

The thanked the judges, Maeve Buckley (AIB, Skibbereen), Geoff Wycherley (Smugglers Cove Adventure Centre) and John O’ Donovan (FBD, Bandon) for being so helpful and generous with their time in choosing worthy winners for the West Cork region.