AN introductory run in a new generation Nissan Qashqai when the car was launched earlier this year left me with the feeling that the company has surpassed most expectations with the latest of one of their iconic nameplates.

Some 14 years on from the first appearance of their trailblazing crossover, the designers have answered the question ‘how can we keep ahead in a space where many have joined and compete?’ A space also where the crossover format itself means it’s not easy to look different any more, when so many others have been ringing whatever style changes are possible.

But yes, Nissan has stepped out and onwards here with bold details that should keep the car out in front for some time. It’s arguable that arch-rival Peugeot and the Nissan are neck and neck here, but in a photo-finish examination I’m reckoning the Japanese car would take the race.

In some respects we have seen this coming. There are elements of the current Leaf EV in the look. But especially in front the Qashqai is more stylistically advanced. More so than anything else in the segment, even at the much more high-priced luxury end.

My previous excursion was an all-white car, but in the blue with contrasting roof of this one it makes an even stronger impact, especially in the profile and rear views. All in all, a car design that promises it will take you places in style.

I reiterate what I have said previously about the interior. The key phrase is sense of quality. In materials, design, and build. The new Qashqai is a prime example of how it is nowadays so difficult for the traditional premium brands to differentiate themselves from the mass market. 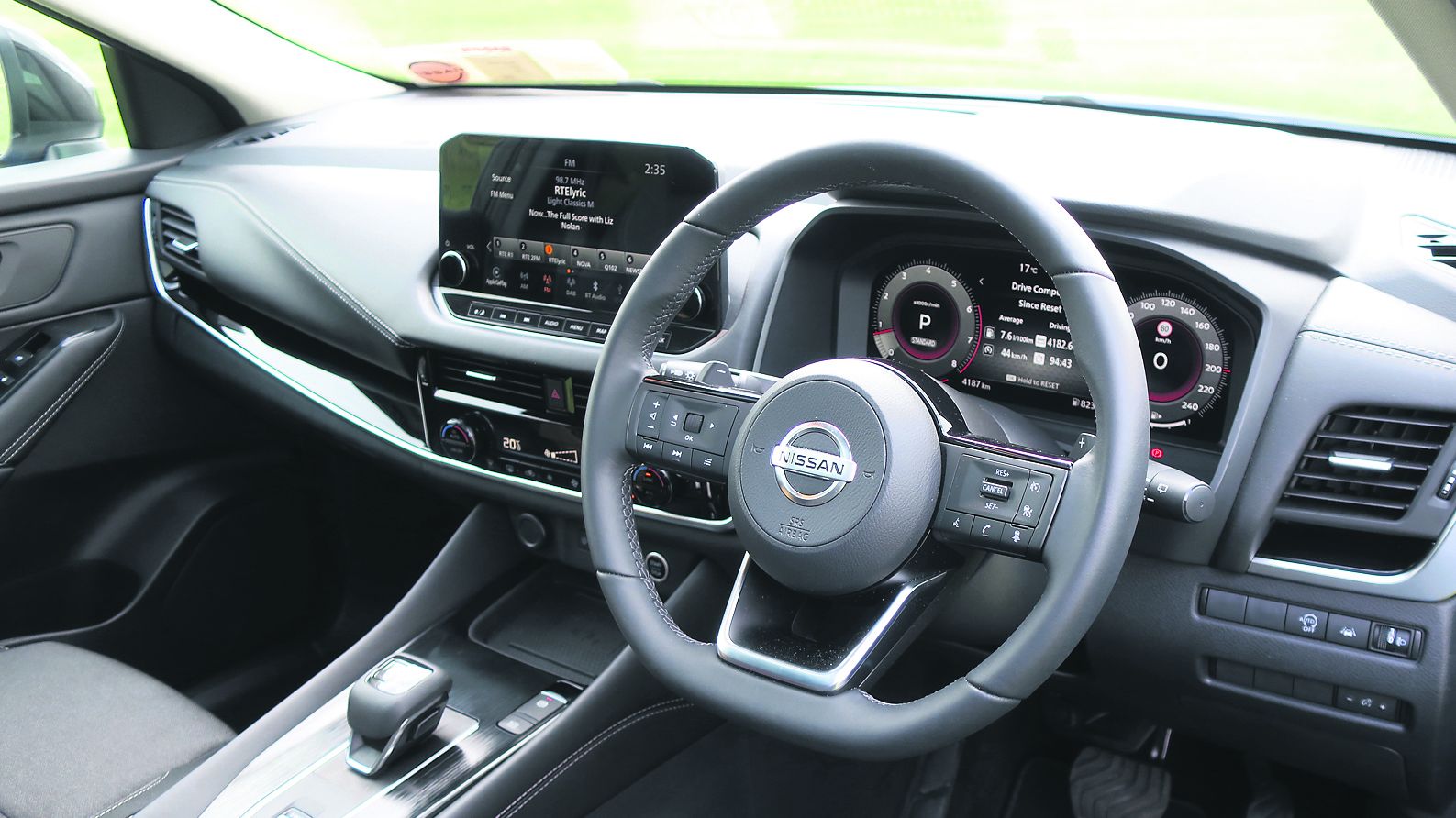 I like the no-nonsense attitude in the new Qashqai to managing information, entertainment, and control. There is the ubiquitous central touch-screen, but real knobs and buttons control things like radio volume and climate management.

And the clear labelling of the various functions on the steering wheel is how it should always be done. The main driver instruments set-up offers two views: I preferred the one which gave me the traditional dials.

This is a bigger car inside than its predecessor, so roominess is a given in the comfort equation. With longer family trips in Ireland probably remaining the thing for holidays, even with the reopening of international travel, at least for another year or so, a new Qashqai will certainly make things easier.

This car came with the CVT automatic transmission option, one of the reasons I took it out. Between EVs, hybrids, and dual-clutch automatics which have become such a larger part of my test car programme over the last couple of year, I’m getting very used to two-pedal driving as a norm. Certainly it suits the Qashqai in its latest iteration. A smooth traveller in every other way, a seamless auto fills out that experience.

The engine here is the 156hp version of the 1.3 turbo petrol. The electrification is mild-hybrid, which recovers enough energy in travel to offer acceleration boost when called for. A full-hybrid version in which the electric motor is used all the time is coming soon.

This revisit so soon after launch, and the drive experience through the time, very much reinforced my belief that the latest Qashqai provides both the sense and the visibility of quality motoring.