AFTER gaining a considerable early experience in offering electric versions of some standard models, including the original Ioniq, Hyundai took the decision to create a single brand for their dedicated battery-electric platform offerings. As the Ioniq had already evolved to being an EV-only model, there was a logic in using that already-familiar nameplate for the job.

So this is the first of those dedicated EVs, the Ioniq 5. There will be others — the Ioniq 6 has already been previewed in concept and won’t be long coming. It also makes sense that even a sub-brand should be distinctive, and they certainly managed that in Ioniq 5.

The designers abandoned the curves that are currently the vogue in most cars and went for a very sharp-edged look, with defined lines. It’s a wedge shape, with visually clever cross-sculpts and graphics that make the overall look interesting, and that changes with the way light is falling.

At first impression to one old enough in this game to remember such things, the inspiration could well be a case of having gone back for the future and taking cues from the Lancia Delta of the 1980s. And that’s not bad. Especially if you took the Integrale version as your template.

It’s deceptive. The Ioniq 5 is actually longer than its stablemate Tucson, and wider but lower. The wheelbase is longer than in key competitors from Volkswagen and Tesla, which adds very obvious extra room inside when you settle in. Apart from actual space, the design of the dashboard and footwell gives a real sense of airiness to those in the front seats. For those in the back, there’s more elbow room than they might have expected and there’s lots of space for adult heads. 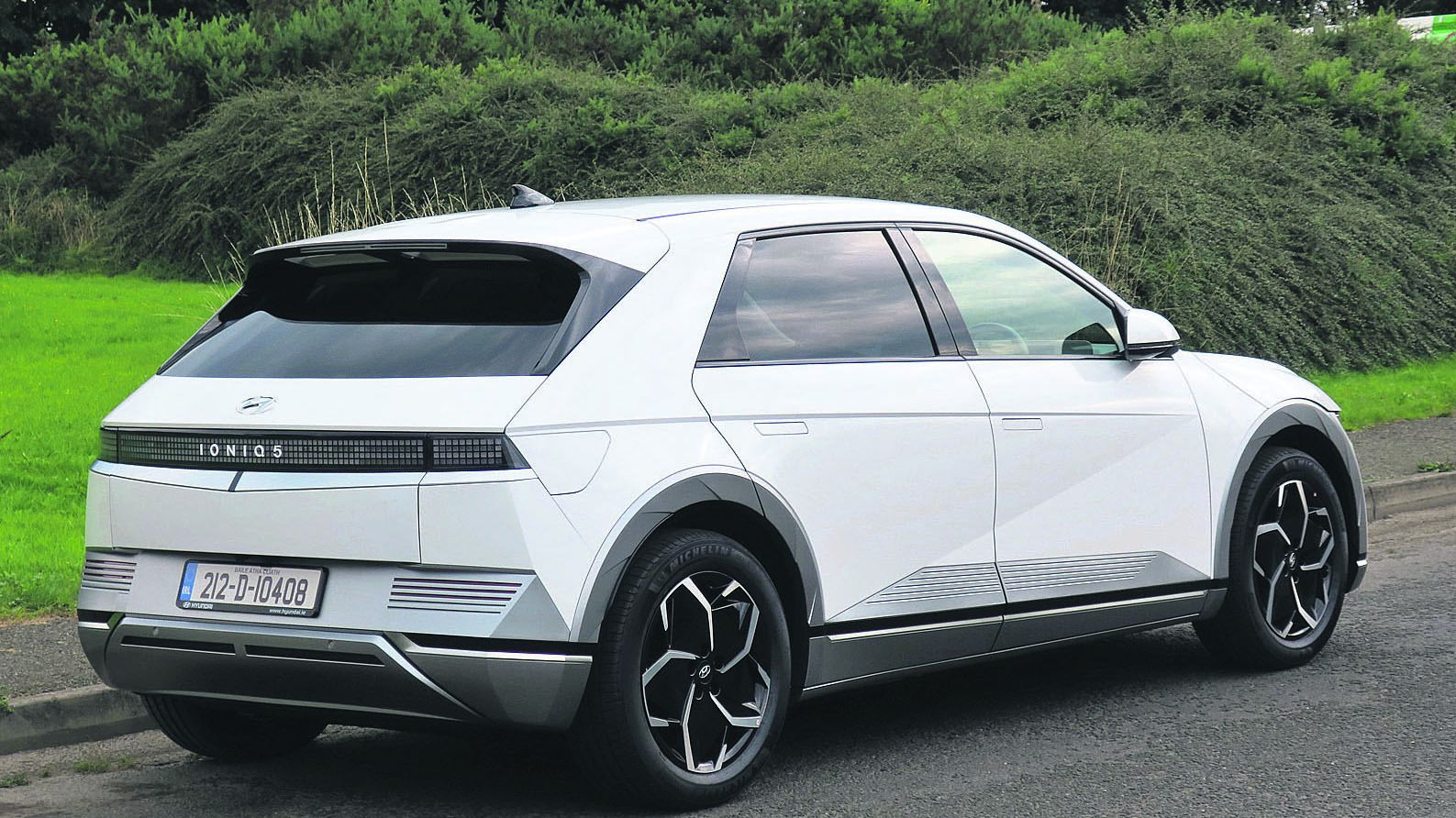 The distinctive design styling of outside is also a feature of the dashboard and instruments. The two screens that make up the infotainment are a surprise at first view. They’re housed in a white kind of Bakelite-style plastic, and are in themselves of the ‘electronic paper’ technology. The screens are white background, with the info and graphics in black and colour on them. Kind of like a Kindle screen with colours and a higher definition. It is certainly easy on the eye, and is not affected by bright sunlight.

It did take me a while to navigate my way around the infotainment space, the key parts of which you can access by proper buttons. But I quickly got used to it. A quirky option is that there’s a set of sound effects that you can bring up instead of radio or music.

They include seashore waves lapping, a rainy day (don’t think we need that), a busy café, and more. Maybe these are in case you get freaked out by the very quiet travel of the car on a motorway. Road surfaces will dictate road noise, but there’s really very little sound from wind passing over the body so the aerodynamics must be good.

The Ioniq 5 comes with a rated range of around 380kms. On a day-long run I started with 352kms and finished with 87kms left. My actual distance travelled was 242kms. I used motorway, normal roads and mountains on a comprehensive mix of  routes, and matching kilometres which gave me a fairly real-life use. An advantage of being on Hyundai’s latest dedicated EV platform is that the Ioniq 5 can take advantage of the fastest charging systems available today for very quick top ups on the road. 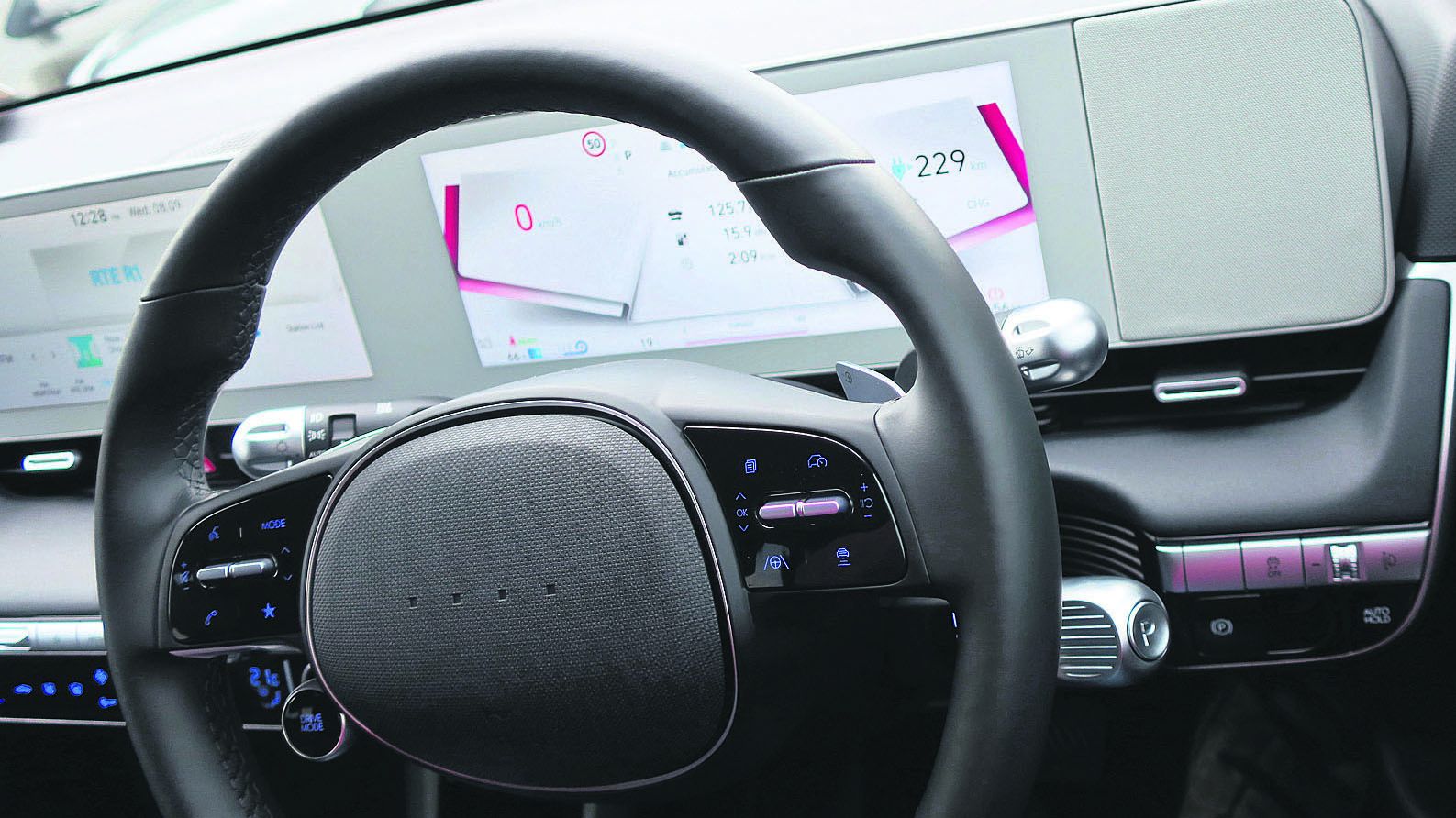 There is an option of a larger battery version with a rated range of 481kms, and there’s also an AWD version of that.

To drive, the Ioniq 5 has the advantages of all electric cars — no gear changing, instant pulling power, and a low centre of gravity that helps stability on twisty roads. Again, I like the paddle system of changing the level of energy recuperation, which in mountain terrain is also very useful in lessening the need to use the brakes.

As I’ve said before, I’m getting quite used to all this. If anyone has doubts about whether an electric car would suit them, ones like this can certainly help alleviate their concerns.