THERE’S something about Italy and its sports car tradition that has seeped into the whole genre.

It’s in the pairs of letters that indicate a raised temperature above normal driving experience. Such as GT, from the Italian Gran Turismo evolution of the grand touring concept and adopted by Lancia in the 1950s to offer a sporty perception.

And TI, from the Turismo Internazionale out of the same language, originally a competition class between the wars and also in the 1950s used by Alfa Romeo to mark a model with something special.

BMW in Germany took note, and in 1963 added a TI suffix to its 1800 model, designating a standard car with something extra.

In 1967 they brought out the 1600 TI, which was supplanted by the 2002 ti, something of a classic in relatively affordable high-performance sedans of its time. The letters pair hasn’t been used since the late-90s when it was attached to a range of 3 Series derivatives.

History lesson over, the ‘ti’ is back in the BMW catalogues. This time in a 1 Series targeting the classic hot hatch brigade led by the VW Golf GTI. (Note how the Wolfsburg crew cleverly merged GT and TI back in the mid-80s to denote what has become the most aspirational hatchback amongst a certain demographic?) 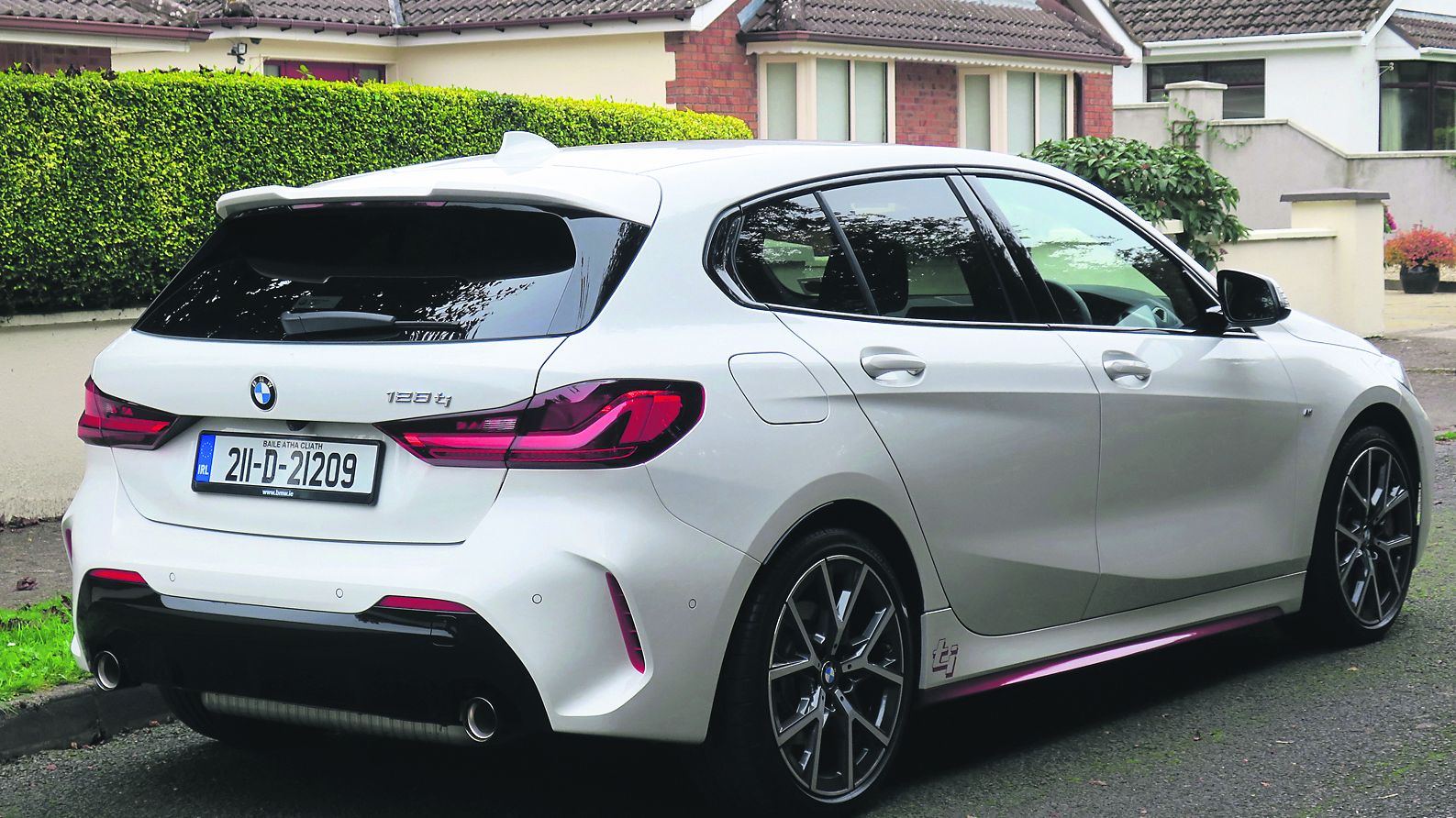 The BMW 128ti on first look certainly makes an impression. One that is not in any way subtle. Red detailing against the white of the body in the review car virtually shout out ‘special!’.

If you want to travel discreetly, it’s not for you. You can buy the car in red or blue too, in which case the accents are in black.

Details are based on BMW’s M Sport dress-up, so there are specific covers and mouldings, including a side skirt trim, all geared to making the ‘ti’ statement.

The red theme continues inside, with big red patches in the backrests of the standard sport seats, the embroidered ‘ti’ badge in the central armrest and contrast stitching in the other armrests, door panels and instrument panels.

You know, after the initial dazzle, you settle down with this car. Granted, it may externally attract some extra attention from the road policing people, even if you’re being sensible where they’re likely to be around.

But inside it looks and feels good. Not least because of the very good layout of screens and instruments, and thoughtful view options in those latter.

The red brashness subsides to something like a warm glow after a time, and you cease to feel that you’re looking like a cartoon Halloween devil.

To drive, there’s definitely a TI or ti sportiness about it. The M Sport suspension, which also lowers the car, is on the firm side.

As with all current 1 Series cars, apart from the xDrive variants, it is FWD. Which I prefer, certainly in a compact hatchback.

The 2.0 engine, a tuned-down version of the carmaker’s most powerful 4-cylinder as used in the flagship M 125i xDrive, has 265hp which provides enthusiastic acceleration. 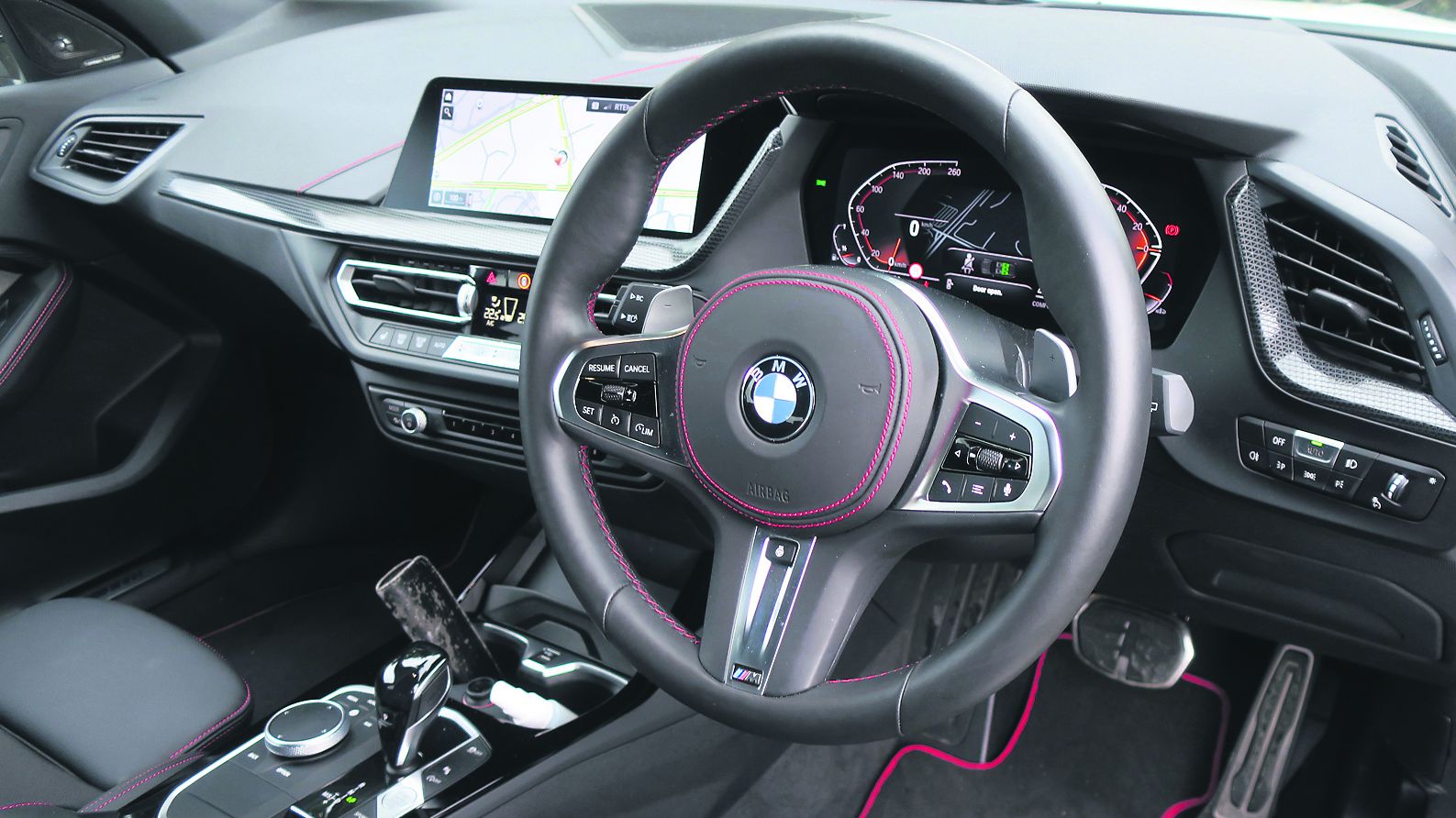 It makes spinning up to full motorway speed on the access merge a fun feeling. Also offers some playfulness on my regular twisty (safe) test routes. Some argue that the standard auto-box is not appropriate, I say it’s how you use it.

I liked the whole feel in the enthusiastic sessions. Not so much while cruising the motorway, where the firm suspension and a surprising amount of road noise could make long journeys tiring. But then, the 128ti is not aimed at those of us for whom driving comfort is mostly our thing. There are enough others in the target buyer range to make it worthwhile for BMW.

What I like: How quickly I got used to feeling I was in a mid-life-crisis treat.