The year is getting off to an exciting start for the lifeboat crew in Courtmacsherry who will welcome their new boat into the station this weekend. It will give them much greater capabilities when conducting rescues

THERE can be no greater sacrifice than putting one’s life at risk to save others. For almost 200 years, members of the Courtmacsherry Lifeboat have illustrated acts of selflessness, bravery and a spirit of goodwill combined with a sense of camaraderie, unique pride and gallantry that has transcended generations.

The Courtmacsherry Lifeboat, founded in 1825, is one of the oldest lifeboat stations in Ireland and Britain, indeed, it is the oldest Irish station in terms of recognition by the (RNLI) Royal National Lifeboat Institution.

This Sunday, January 15th at 1.45pm a new Shannon class lifeboat, the Val Adnams will arrive in Courtmacsherry, marking a new era for lifeboat coxswain Sean O’Farrell and his crew. It will be the third new motorised boat for the Courtmacsherry station. 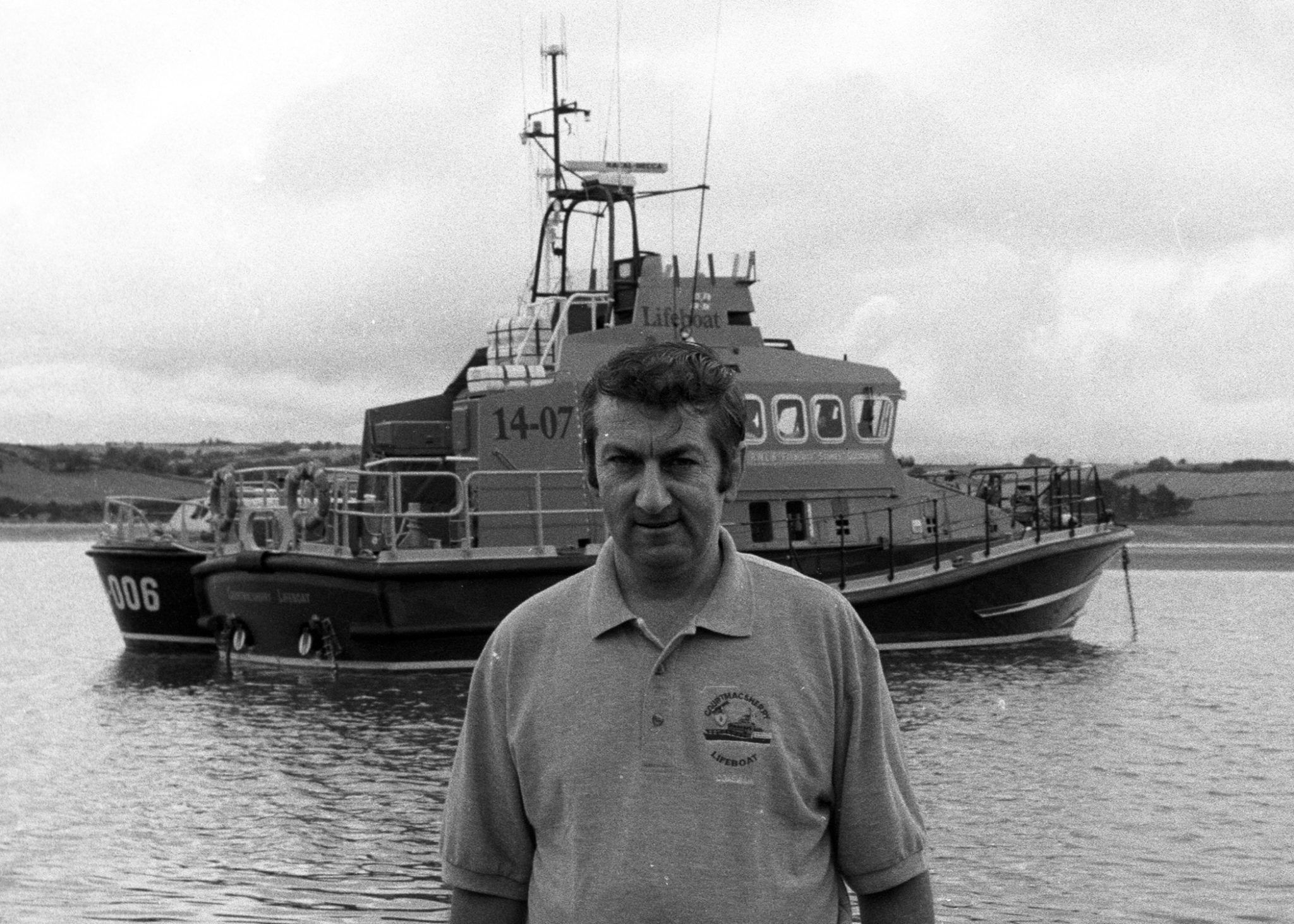 Much has changed down through the years, but the pride in having a lifeboat has never waned, even in difficult times.

Former coxswain and a synonymous figure with the Courtmacsherry Lifeboat, Diarmuid O’Mahony, who served on six motorised boats, knows more than most. He told The Southern Star why the lifeboat is so important.

‘There’s a great tradition here. Courtmacsherry was once a very busy harbour, but that changed, the closure of the railway in 1961 was a big loss and when the national school relocated to Barryroe a year later, it meant that families didn’t come to live in the village as much. The lifeboat was one of the few things we held on to along with the two churches, hotel and public houses,’ he said.

Most people think of the sea in its idyllic setting, but going out on a lifeboat call in stormy weather is not for the faint hearted.

‘When we were young, we heard of stories about the lifeboat men and you wondered, “would I ever be able to do that?” I can remember one call, it was one of the worst nights ever and a French trawler was in trouble. I looked out the door and you could hardly put your head out, the wind was so strong and I was thinking, how would the lifeboat men do tonight.’

At that time, Diarmuid never dreamed about being a coxswain.

‘You waited to be asked before you would join the lifeboat, that was the way it was back then. There was just the crew, no reserves and if there wasn’t enough of a crew, there were plenty of fishermen around that would volunteer on the spot. There is a great pride and tradition here, it’s been handed down.’

With a glint in his eye, he quipped, ‘It’s a challenge too.’ 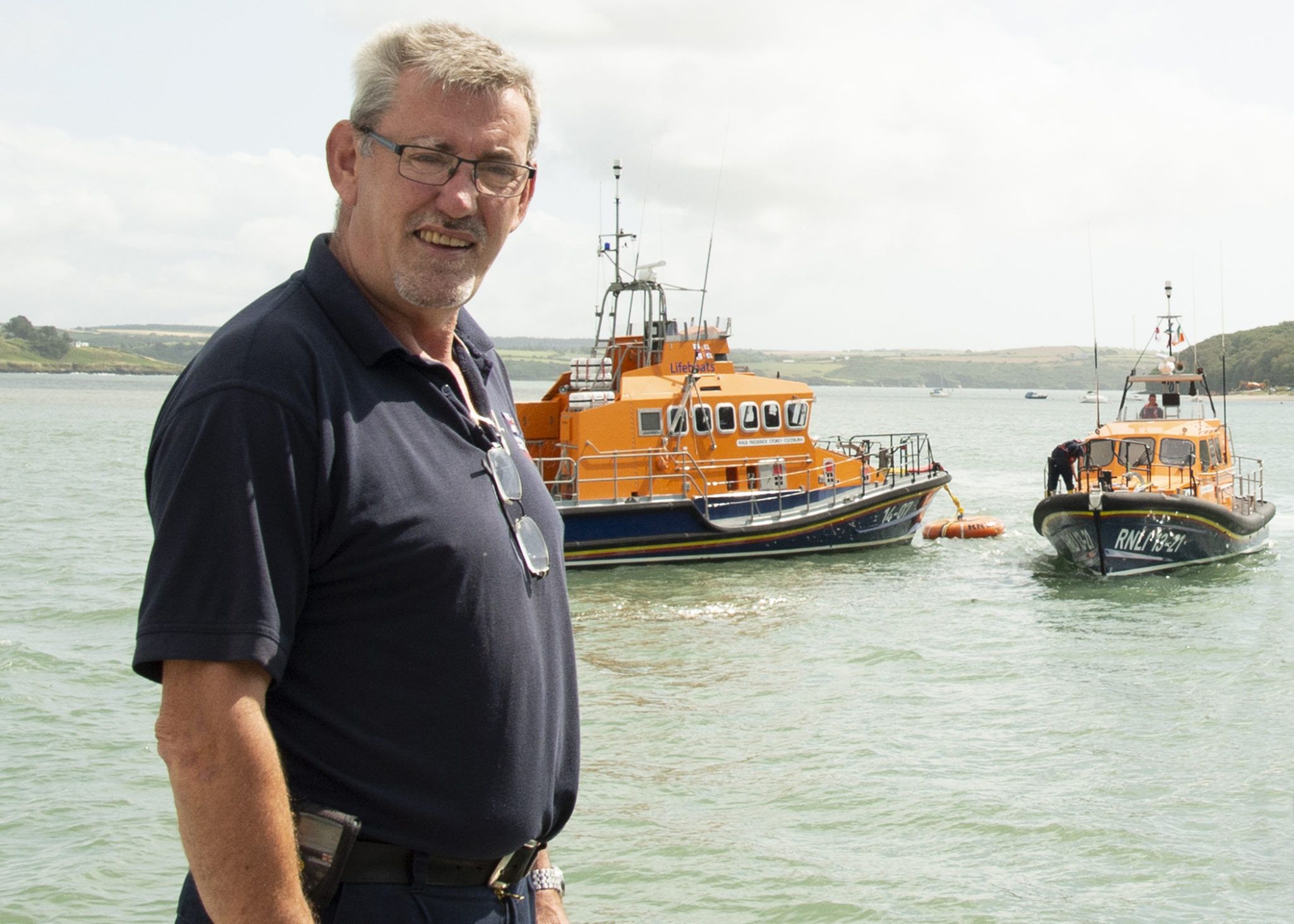 Sean O’Farrell, coxswain of the Trent Class RNLB Frederick Storey Cockburn in July 2019 with boat (left) and the Shannon Class RNLB Brianne Aldington that was on its way to Clifden, County Galway. (Photo: Martin Walsh)

Having joined the lifeboat in 1962 Diarmuid was appointed volunteer coxswain in 1982 and served until 2000 and subsequently served as DLA until he retired last year – after 59 years of service.

Two calls stand out: the Fastnet race in 1979 (when he served as emergency mechanic) and again in 1989.

For about the last eight years, the Courtmacsherry Lifeboat has operated from a crew of 30.

Coxswain Sean O’Farrell describes the new boat: ‘The main change is that the boat is designed for operating in shallow water and broken water and it’s jet propelled. It is extremely manoeuvrable and ideal for this harbour.’

RNLI lifeboats are usually named after people that bequeathed monies to the RNLI. The current boat, Frederick Storey Cockburn 14-07 (that arrived in 1995) was named after a banker of Irish descent and it was his wish that the boat be sent to an Irish station.

However, the Val Adnams 13-45 offers a different perspective.

‘I have spoken with Val Adnams and she has a lovely outlook on life,’ said Sean. ‘She grew up in Weymouth and the sailing club was right alongside the lifeboat station so she is well versed in lifeboats. Ironically, she is now living in Idaho, one couldn’t be further from the sea. We are all looking forward to welcoming her to Courtmacsherry for the naming ceremony next September.’

On the qualities of the new Shannon class boat, Sean said: ‘I remember stepping onboard the Trent and we were coming from a Waveney at the time, it was like going from a Morris Minor to a Formula 1 car, this is a little bit the same. Everything has advanced in the 27 years we have had the Frederick Storey Cockburn. The manoeuvrability of the new boat is second to none. There are much more electronics as well and with it being jet drive, you have to learn how to drive again. Some of it is the opposite to what one is accustomed to, however, our capability will be greater. We won’t be carrying a daughter craft (the current boat has a small rubber dinghy with an outboard engine that allow the crew to get in close).

The new boat can get in so shallow, you can even step out of it.’

These are certainly exciting times for Courtmacsherry Lifeboat. The crew train each Friday night for about two-and-a-half hours.

A new training regime consists of about 10 exercises that have to be executed with precision. Aside from the new boat, the RNLI has also allocated money for a new pontoon (within the next few years) that will allow access to the lifeboat via a raised walkway from the station.

Sean O’Farrell remarked, ‘In my lifetime, the likelihood is that I will never see another new lifeboat here, because the Val Adnams will be expected to last 50 years.’