Hands up who’s wrecked? I suppose a global pandemic will do that to you. Probably explains why over 15,000 have signed up to a course to find happiness.

It’s Week 53, and I’m feeling totally pooped from the pandemic and in dire need of recalibrating myself, and my Fitbit, to get back on track

• I’M in the grips of a deadly brain fog. All causes are pointing to the global pandemic, WFH for over a year, general Groundhog Day fatigue (and also probably not going to bed early enough). Without sounding dramatic (being totally dramatic) it’s definitely Hounds of the Baskerville territory and even the simplest of things seem like an uphill slog this week.Making any decision is a major challenge (except what to wear because that answer is always leggings), and I very much wish I could outsource my ‘life management’ to someone for a while. Or if that isn’t possible, maybe just have a long lie-down some place quiet.

• I did have a morning off recently and after dropping to school I did something I haven’t done in years – I went back to bed. It’s something that I spend 86% of my time fantasising about (the other 7% is spent wishing Deliveroo came to West Cork, and the final 7% on hoping for a new series of Schitt’s Creek. Is that 100%?). Typically, I couldn’t sleep – I’m thinking we all saw that one coming. I switched on morning TV, which is absolutely head-melting (basically a succession of glossy, smiley presenters telling you what’s coming up next), so I begrudgingly got up and went for a walk and of course it made me feel far better. I don’t expect the stars to align for a repeat ‘back to bed’ opportunity for at least another seven years, so I feel totally robbed.

• Not surprisingly, in my current frame of mind, Lent pretty much failed to launch for me at all. So I’ve that guilt to carry around, along with the extra weight. I’m doing that really annoying thing of losing two pounds one week, gaining one the next, losing one and half, gaining two. I think I’m pretty much back where I started, but I can’t be sure (foggy brain). In a feeble attempt to win back some control I turned to my Fitbit. It’s as confused as I am and said I had been asleep for 738 hours and that I was on day 236 of my cycle (the menstrual kind). Kind of says a lot. I suppose if Gwyneth Paltrow admitted to gaining 14lb during lockdown, I shouldn’t feel too bad? I just wish I hadn’t read the bit where she said she had already lost 11 of them again through an ‘intuitive fasting programme.’ And for a while there I thought we could be friends.

• It’s interesting to read I’m not alone in my ‘meh-ness’, and that a free online course to help people find happiness during the pandemic has seen 15,500 people sign up. It’s a 10-week course called ‘The Science of Health and Happiness’ run by the Royal College of Surgeons University of Medicine and Health Sciences. Organisers said the large interest in the course ‘reflects a need for people to find happiness after enduring over a year of negative impacts from the pandemic.’ I wonder if there’s a module on ‘what to make for dinner?’

• Oh my god, like, what is with the litter around the place at the moment? Within my 5km it’s disgusting, and I know from articles in this newspaper, that it’s the same all over West Cork. I thought we were all after getting back in touch with nature after all the lockdowns, and had a new appreciation of the beauty of our surroundings. But clearly we’re not all feeling that way. Seems like lots of ‘dashboard diners’ think nothing of throwing their coffee cups, chocolate wrappers, soft drink cans and bottles, and more, straight out the car window and into the ditch. If so many good citizens weren’t arming themselves with black bags and gloves on their daily walks, the problem would be even worse. It’s so disappointing that this mentality still exists despite the Trojan work being down by various stakeholders.

• Also, quite disappointing was my sister having her vaccine cancelled this week. She was one of the 30,000 in the country who was in line to get AstraZeneca and was counting down the minutes for her jab. She has Down Syndrome and getting the vaccine will mean a much-needed return to some kind of normality for her after over a year of cocooning. When the news broke on Sunday that it was being suspended we were gutted – she had been due to go the following day. I was her nominated driver and was looking forward to the ‘long distance’ spin to Skibbereen – I had the handbag out and all. But being serious, it’s important we can have confidence in our vaccines and that any potential red flag issues are examined thoroughly. Better safe than sorry and all the rest.

• Did we all get over Patty’s Day anyway? It was quite the novelty having a Wednesday off, wasn’t it? I could totally get used to that. I spent most of it in the garden, and doing other endless ‘jobs’. It’s gas (also mind blowing) how this time last year we were half hoping we’d get a few weeks at home to get those jobs done. Hah! 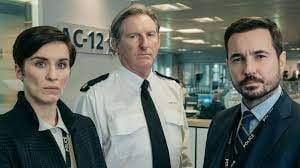 I will find some joy in the new series of Line of Duty, though - if I can keep up with the plot.

• Lastly, I’m very much hoping my brain fog will have lifted in time for the long-awaited new series of Line of Duty which is back this Sunday, March 21st on BBC One. You need to be razor sharp to keep up with this crime drama (even five seconds of phone scrolling and you’re done for). My husband has suggested I don’t watch it in real time, but record it, so I can pause for the inevitable plot questions. I’m not sure if I should be insulted or grateful for the idea. I’m also enjoying Smother on RTÉ 1 starring Schull’s Ayoola Smart. It’s taking the edge off Sunday nights very nicely. I’ve no idea where the storyline is going, but it’s not like I’m going anywhere myself, so let’s sit back and enjoy it.