Southern Star managing director Sean Mahon (left) and editor Con Downing presenting the live-streamed 2020 West Cork Farming Awards ceremony from The Southern Star studio in Skibbereen. A recording of the event can be viewed on southernstar.ie

The awards are traditionally a Sunday lunchtime event held in the Celtic Ross Hotel, Rosscarbery, however despite limitations imposed by Covid-19, Southern Star MD Sean Mahon insisted it was still important to honour the West Cork farming community for their Trojan efforts during this difficult year, hence the live-streamed event. 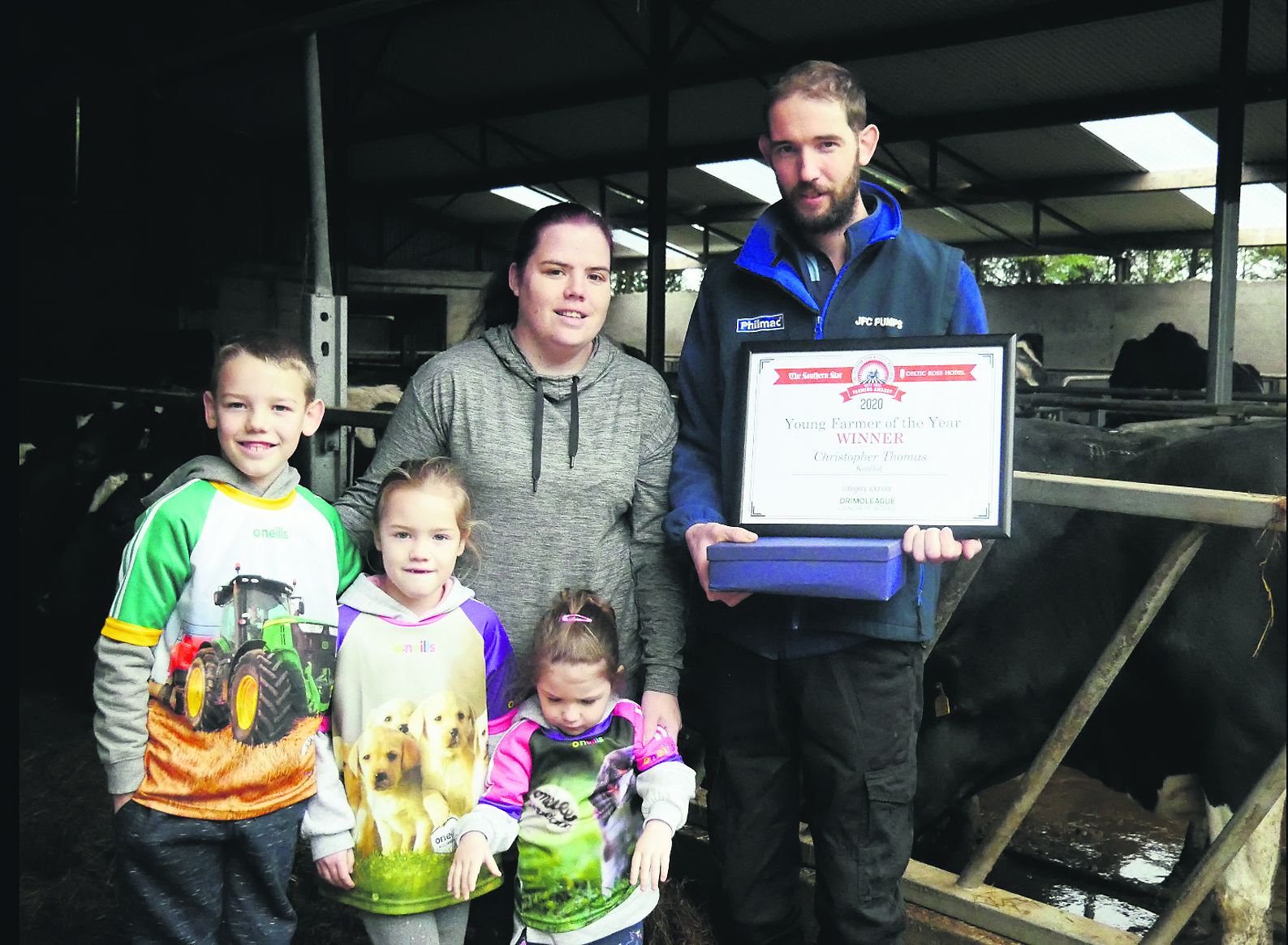 Christopher Thomas of Kealkil, who won the West Cork Young Farmer of the Year category, sponsored by Drimoleague Concrete Works, in the 2020 West Cork Farming Awards, pictured at his farm at Letterlickey, Bantry, with his wife Martha and their children Oisin (8), Laura (6) and Hazel (2). (Photos: Jack McCarron)

A sense of occasion was very much enjoyed at the anticipated event, helped by special guest Minister for Agriculture, Food and the Marine, Charlie McConalogue and pre-recorded interviews with all the winners.

The Minister for Agriculture paid tribute to farmers for their efforts over the past year and said: ‘The cows were still calved, the ewes lambed, the crops sown and harvested all the while dealing with a truly unprecedented global pandemic. 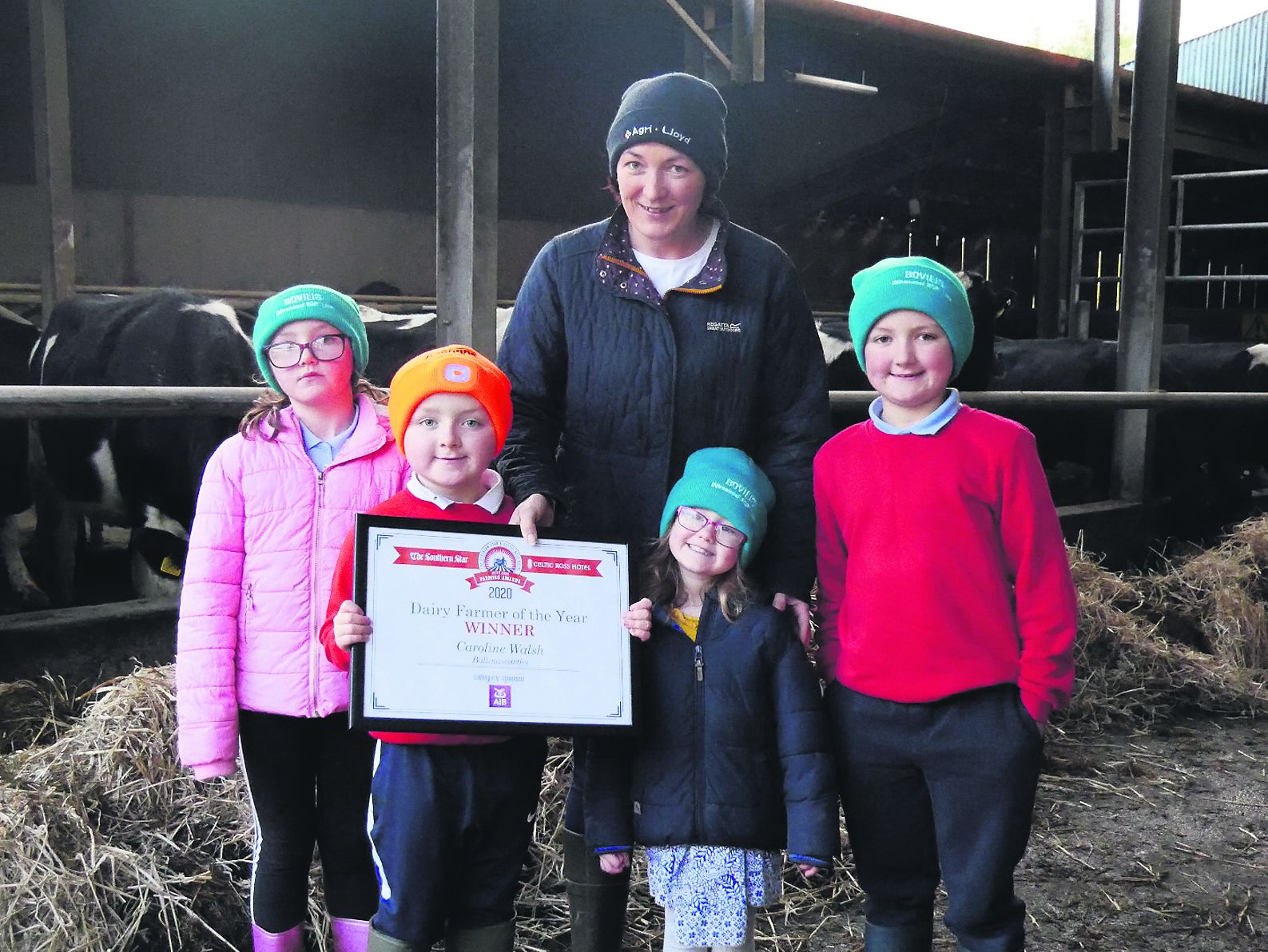 Caroline Walsh, Ballinascarthy, winner of the West Cork Dairy Farmer of the Year category, sponsored by AIB, in the West Cork Farming Awards, pictured with four of her five children, Leanne (7), Conor (6), Louise (4) and Daniel (8). Missing from the photo is Caroline's daughter Katelyn (14).

‘You as farmers and highly qualified food producers kept the shelves stocked and the wheels of the sector turning and I thank you for your efforts and I firmly believe that the conscientious consumers appreciate your hard work and dedication. That’s all the more reason to continue to recognise your efforts with awards like this.’

Neil Grant, manager of the Celtic Ross Hotel, partners of the event, agreed it was really important to continue the tradition of the awards during such a strange year. 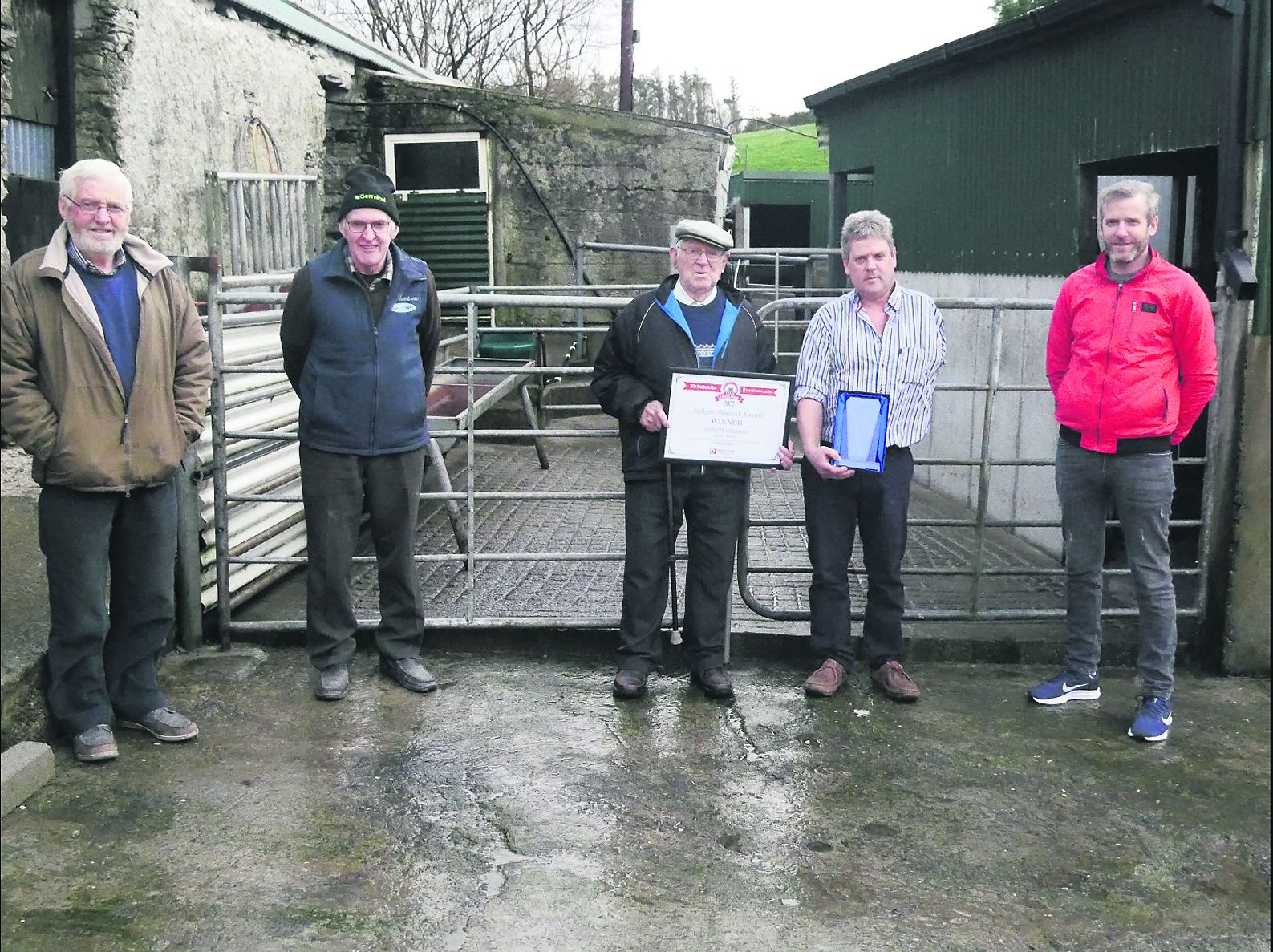 Addressing the nominees, he said: ‘In the toughest of trading years, you have all gone over and above to be recognised.’ And he added that the tourism and farming sectors would unite to help pull Ireland’s economy through, as they had in the past.

Getting down to the business of the awards, editor Con Downing explained how The Southern Star issued a call out for nominations earlier in the year, which were narrowed down by adjudicators who were Tom Curran, regional manager of Teagasc for Cork West; JJ Walsh, business advisor, who is well-known from his time with the Carbery Group, and John Buckley, 2013 Macra Young Farmer of the Year and now a member of the board of Teagasc. 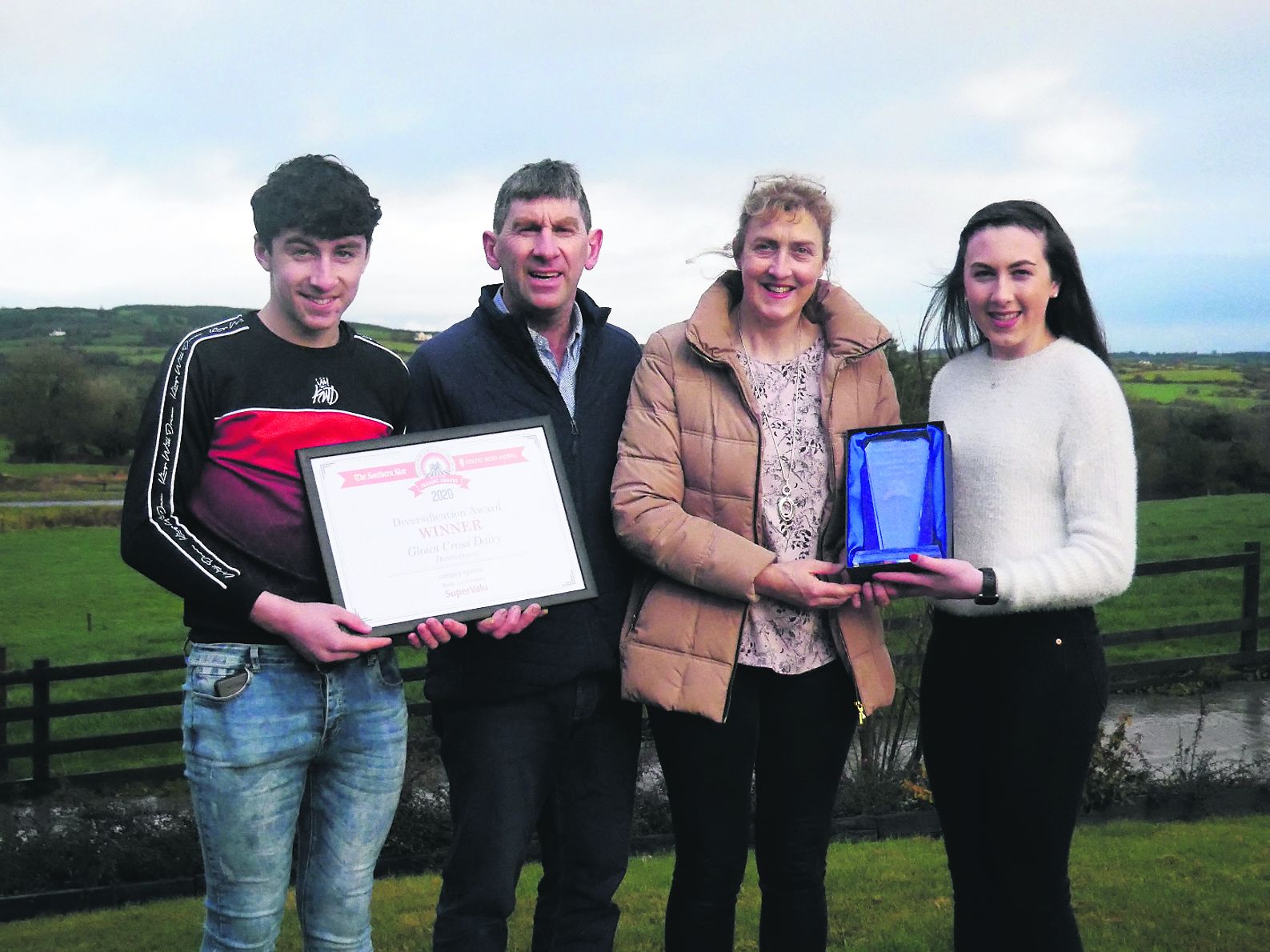 Kevin and Liz O'Donovan of Gloun Cross Dairy, Dunmanway, winners of the Diversification category, sponsored by Scally’s SuperValu, Clonakilty, in the West Cork Farming Awards, pictured with their children Caolán (14) and Eabha (17).

This year’s Young Farmer of the Year prize, sponsored by Drimoleague Concrete Works, went to Kealkil man Christy Thomas who runs a dairy enterprise at Letterlickey, near Bantry. Runners up were Daniel Hickey, Ballydehob and Daniel O’Donovan Dunmanway.

The Hall of Fame award, sponsored by Ifac, went to Jackie O’Sullivan, Bere Island, a man who has given a lifetime passionately campaigning for the rights of farmers and who has been a central figure in West Cork IFA circles for decades. The 81-year-old was one of the legendary group of local farmers who marched from Bantry to Dublin in 1966 as part of a protest that ultimately saw 30,000 farmers converge on Dublin, with some of them staging a three-week sit-in on the steps of Government buildings. 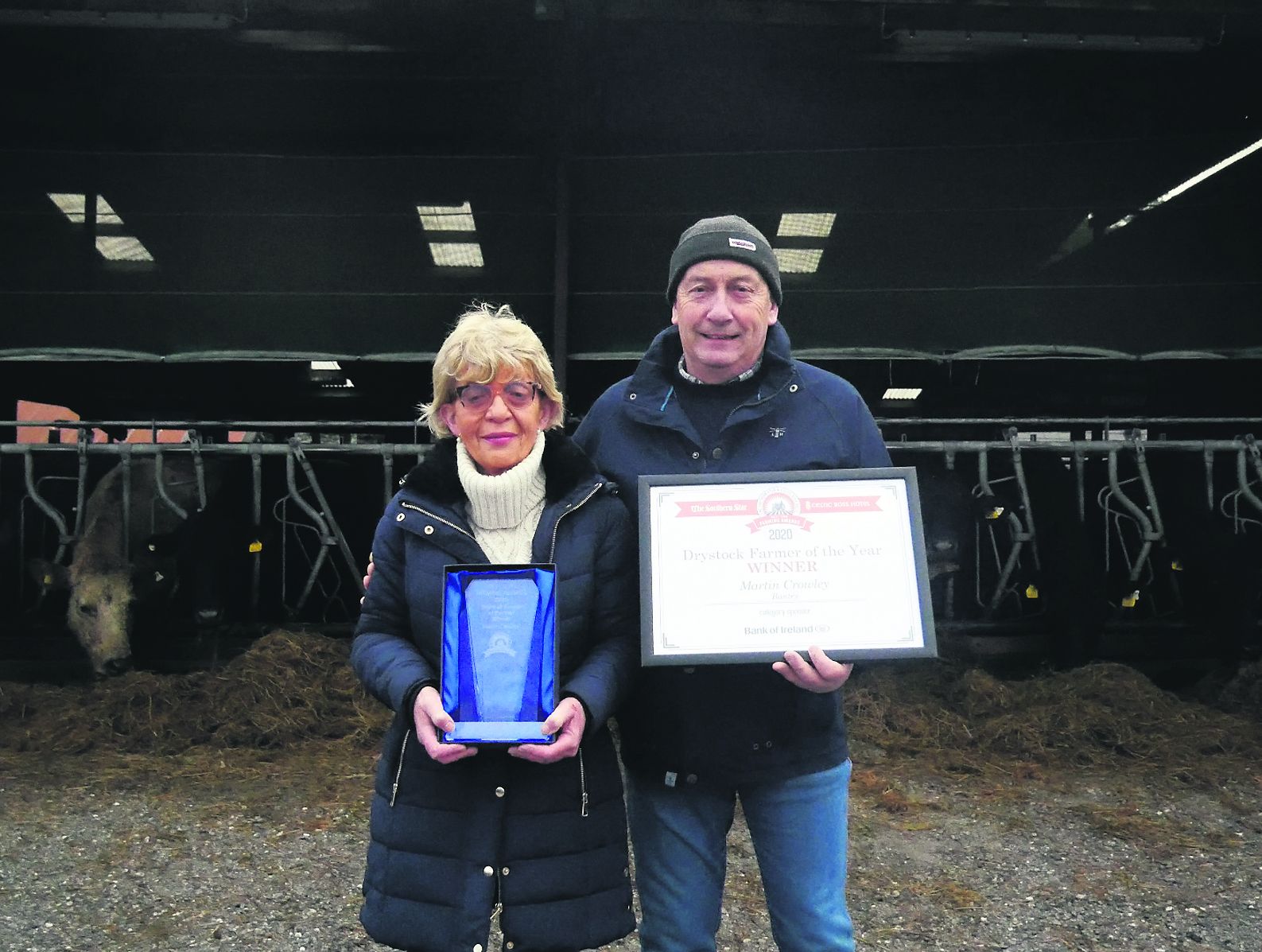 Mary and Martin Crowley, Bantry, who won the West Cork Drystock Farmer of the Year category, sponsored by Bank of Ireland, in the 2020 West Cork Farming Awards, run by ‘The Southern Star’ in conjunction with the Celtic Ross Hotel.

Next it was to the much anticipated Dairy Farmer of the Year category sponsored by Allied Irish Bank. The honour went to mother of five Caroline Walsh from Ballinascarthy who thanked the generations that came before her, without whom she said she wouldn’t be farming today. Runners up were Glenn Forde, Ballinadee and Richard Murphy, Kinsale

Nominees in the Drystock Farmer of the Year category, sponsored by the Bank of Ireland, were Ber Cotter, Renaniree, Martin Crowley, Bantry and Sean Galvin, Macroom.

The honours went to Martin who has been farming on the outskirts of Bantry for the last 40 or so years. He has a mixed farming enterprise of both cattle and sheep.

The final award of the evening, the Judges’ Special Award for Outstanding Achievement in the Farming Community, sponsored by Hodnett Forde Property Services, Clonakilty, went to Jerh O’Callaghan, Colla, Schull. When he was just 17 he was  involved in a serious motorbike accident which resulted in him losing his left arm from just above the elbow. Despite the challenges that involved, he runs a successful drystock enterprise and considers himself a lucky man. 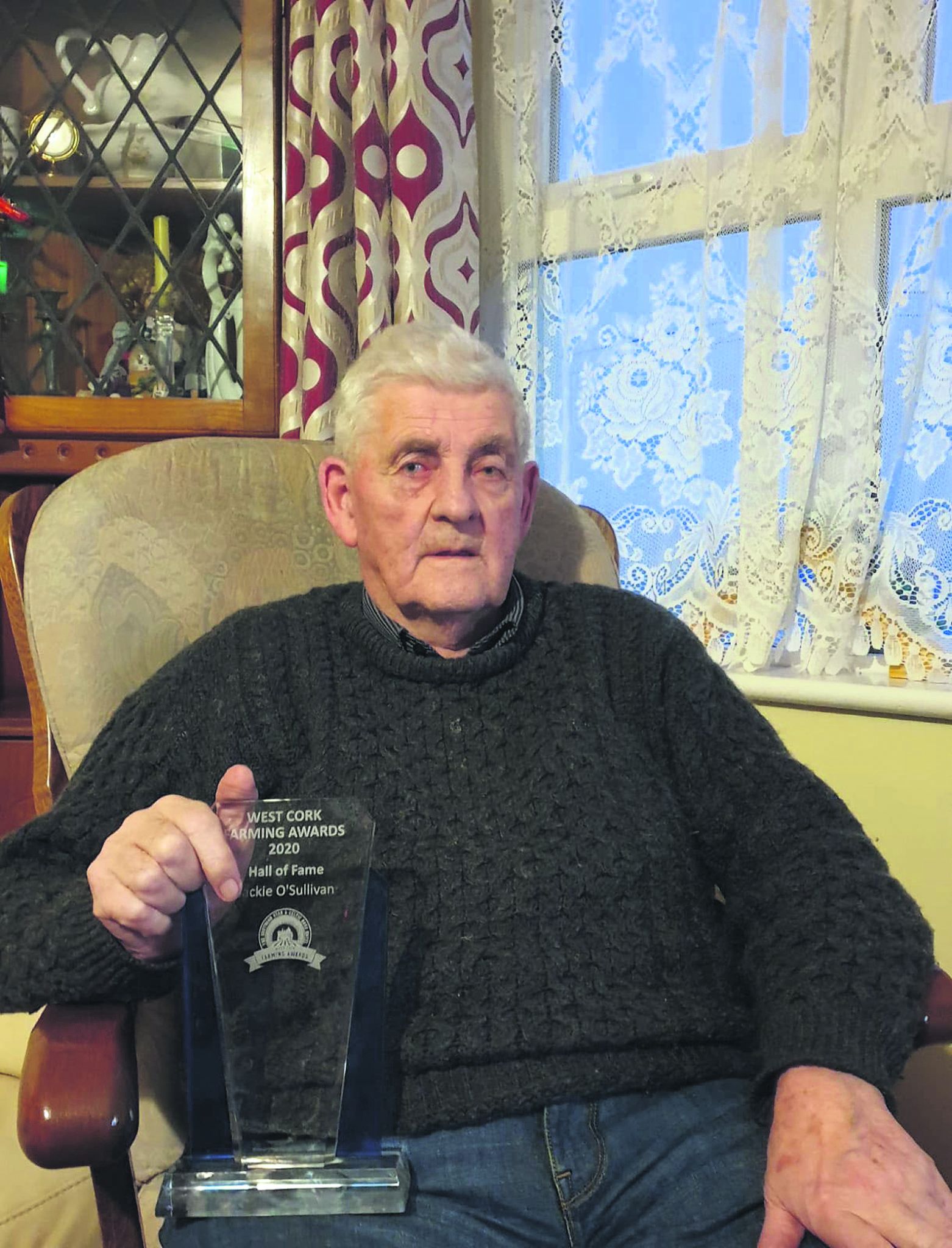 All of the nominees received a trophy and a prize to the value of €500, courtesy of the respective category sponsors.

Sean Mahon concluded the evening by saying: ‘The Southern Star is committed to supporting and championing farming and agriculture right across West Cork. We would love to get back to presenting the 2021 West Cork Farming Awards during our usual Sunday lunchtime gala awards ceremony at the Celtic Ross Hotel in Rosscarbery next September. But that is in the lap of the gods... and in the meantime, we wish you all a very happy Christmas.’

• Watch the event in full below: