Like many men my age, I spend most Sunday afternoons in the kitchen making my own brand of extra-garlicky hummus while listening to BBC Radio 6 Music.

I realise that the dead generations died fighting the British to grant me all these privileges but, sure listen, we are where we are.

The hummus-making is the only one of those middle-aged, hipster habits I picked up during the pandemic to stop myself from going mad that seems to have stuck.

It’s great because when people ask me that poignant question ‘so Colm, what have you learned during the Covid 19 pandemic?’ I have a nice straightforward reply for them – ‘I learned to make hummus’.

No high falutin personal revelations about mindfulness or having a new appreciation for our natural world, me. Nope. Hummus.

The constant baking of soda bread had to go, though. I was the only one in the house eating the stuff and after a summer of holidays and indulgence, September is here and, as my mother would say ‘reality strikes’. So it’s hummus, celery and porridge from now till Halloween.

I was cheered listening to Tom Robinson’s Sunday Social show on BBC 6 this Sunday. As well as a rollicking good playlist, the show featured listeners texting in reports on weekend gigs they had attended all across the UK, where there seems to be a full return of music festivals. It sounded like a missive from another time.

There were tales of drinking beer in the sun listening to bands, with most people bathing in the afterglow of their first experience of live music in 18 months.

It was an infectious, heartwarming listen. One listener reported the blissful experience of listening to a set by Groove Armada while looking out over the London skyline.

So ‘tis no wonder Leo jumped on a flight to go dancin’, I thought to myself.

Of course, in this age of social media, Big Brother is always watching and when a photo emerged of Leo Varadkar sitting on a grass verge talking into a mobile phone at a music festival, the internet lost its mind for the fiftieth time that morning. 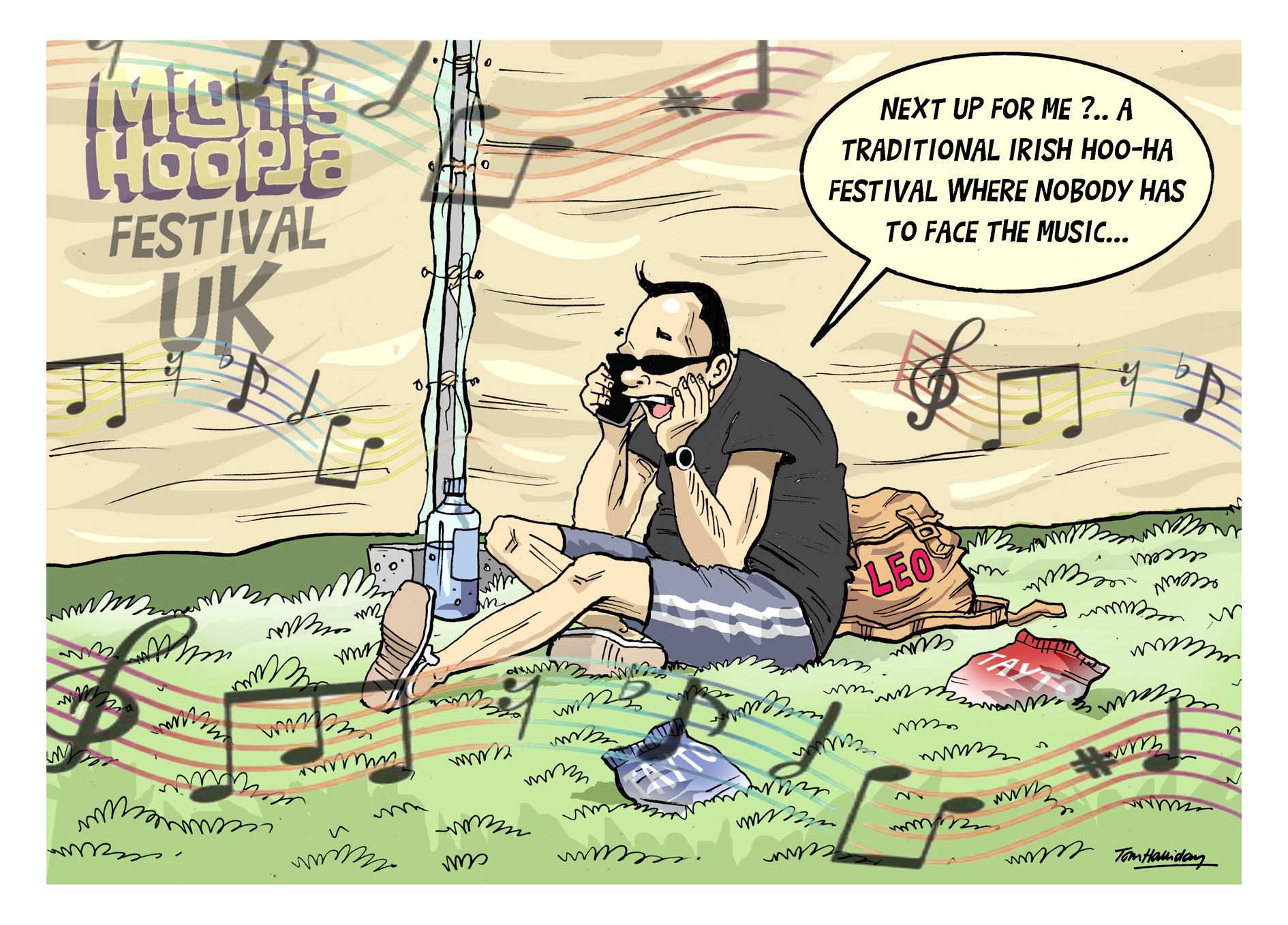 Fine Gael members were quick to defend his right to go on a short break to the UK before embarking on a busy trade mission across Europe this week. He was, after all, abiding by the restrictions there and his shorts looked absolutely immaculate.

But it’s all about the ‘optics’ these days, isn’t it? And especially so, in the wake of Zapponegate, the latest self-inflicted wound by a tired-looking government – a scandal wrapped inside an enigma wrapped inside a wine bar called The Piglet.

No, it hasn’t been a good week for the cabinet on that front, with both Varadkar and Simon Coveney having questions to answer over who texted what, who deleted what, or, if they prefer, the Australian Sauvignon Blanc or the French Chardonnay.

Personally, I don’t see the problem with Mr Varadkar taking some time out of his busy schedule to enjoy some downtime at a music festival. He was typically vocal about his attempts to get the cancellation of the Electric Picnic reversed.

And as much as we need to hold our public representatives to account, there must be a point where creating a mini-controversy out of every small social media leak becomes counterproductive.

With Clonakilty judged to be in the Top 20 Irish towns in which to live in an Irish Times-run competition this weekend, we Clonakilty folk might just have entered a new level of smug satisfaction.

One nomination described the town as ‘an incredibly progressive and forward-looking community which champions inclusivity and diversity’. So fair play Clon and best of luck in the next stage! It’s all a bit awkward for old Blow Outs like me, of course. Before it was just uncles down the country who would ask me, with incredulity, ‘why in God’s name are you living up in that kip?’ These days it’s Irish Times-carrying Dubs who ask me the very same question. My smart answer used to be – sure, what the hell will I do down there, make hummus for a living?

One of modern life’s great confusions – what plastic you’re actually allowed to recycle – came a little closer to resolution this week. In what has been termed a radical overhaul of waste management in Ireland, we can now recycle all plastic packaging waste, including soft plastics and, most importantly of all, crisp packets! Finally, even Mr Tayto can be counted amongst the ecowarrior class.

This is all thanks to the presence of two plastics recycling facilities backed by a €10m investment by Repak. The facilities, one in Limerick and the other in Portlaoise, will process 1bn plastic polyethylene terephthalate (PET) bottles a year.

The packaging needs to be ‘clean, dry and loose’, however, so don’t judge the next Irish person you see ravenously licking the inside of a packet of Tayto.

Remember, it’s for the polar bears.